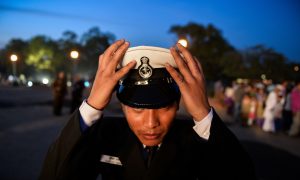 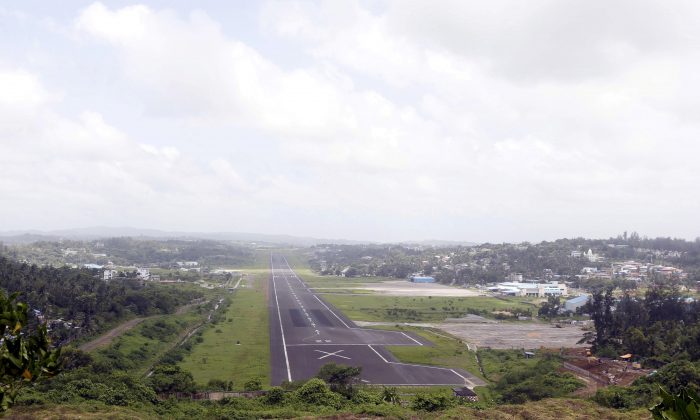 A general view of the runway controlled by the Indian military is pictured at Port Blair airport in Andaman and Nicobar Islands, India on July 4, 2015. (Sanjeev Miglani/Reuters)
Asia & Pacific

NEW DELHI—India’s navy will open a third air base in the far-off Andaman and Nicobar islands on Jan. 24 to beef up surveillance of Chinese ships and submarines entering the Indian Ocean through the nearby Malacca Straits, military officials and experts said.

New Delhi has grown concerned over the presence of China’s larger navy in its neighborhood, as well as the network of commercial ports Beijing is building in an arc stretching from Sri Lanka to Pakistan that India fears could become naval outposts.

The Indian military has seized upon the Andamans, which lie near the entrance to the Malacca Straits, to counter the Chinese challenge, deploying ships and aircraft since Prime Minister Narendra Modi took office in 2014 with promises of a more muscular policy.

Indian navy chief Admiral Sunil Lanba will commission the new base, called INS Kohassa, about 180 miles north of the archipelago’s capital, Port Blair, the navy said in a statement.

The facility, the third in the islands, will have a 1,000-meter (3,280 feet) runway for helicopters and Dornier surveillance aircraft. But eventually, the plan is for the runway to be extended to 3,000 meters (9,842 feet) to support fighter aircraft and longer-range reconnaissance aircraft, navy spokesman Captain D.K. Sharma said.

“The underlying thing is the expanding Chinese presence. If we have to really monitor Chinese presence, we need to be adequately equipped in the Andaman islands,” said former navy Commodore Anil Jai Singh.

“If you have air bases, you can cover a larger area,” he said, adding he expected the navy to permanently deploy more ships to the islands in the next phase of the buildup.

A Chinese submarine docked in Sri Lanka’s Colombo port in 2014 drew such alarm in New Delhi that Modi’s government raised the issue with the Sri Lankan authorities.

India and China have been locked in a contest for influence, with New Delhi trying to push back against Beijing’s expansive diplomacy in the region.

This week, Indian defense officials are due to hold talks with the defense minister of the Maldives, Mariya Ahmed Didi, as New Delhi seeks to repair ties following the ouster of the island nation’s pro-China leader in a presidential election last year.

In November 2018, India announced that it would continue to develop the Iranian seaport of Chabahar—located in southeastern Iran on the Gulf of Oman—as part of New Delhi’s maritime strategy to counter China’s growing influence in the Indian Ocean. The development would include constructing a railway line running from the port to Afghanistan.

The importance of Chabahar was highlighted during a regional conference in New Delhi on Nov. 1, when Indian Foreign Secretary Vijay Gokhale spoke about the port as part of India’s Indo-Pacific strategy.

“We are also seeking to develop the Chabahar port as a gateway for onward connectivity to and from Afghanistan and Central Asia,” Gokhale said, according to English-language daily newspaper The Economic Times.

With Iran’s Chabahar port, India may bypass Pakistan to trade with Afghanistan directly, according to EurAsian Times. The port is also strategically located less than 100 nautical miles from the Pakistan port of Gwadar, which has served as a key part of China’s economic investments in Pakistan.

The Chabahar port is part of India’s plan to counter China’s “string of pearls”: a geopolitical concept developed by Beijing, referring to a network of Chinese military and economic relationships in the Indian Ocean.