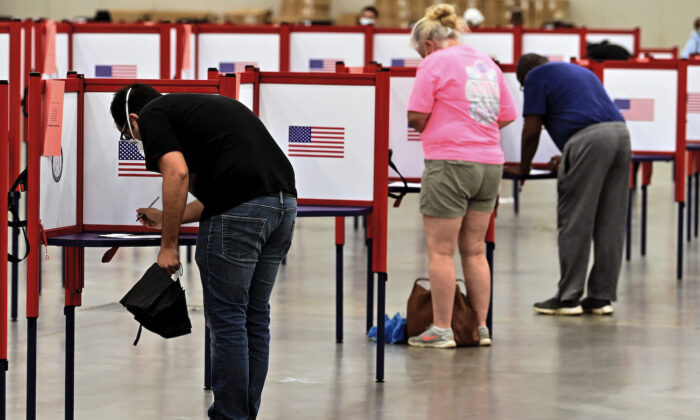 Voters fill out their ballots during in person voting in the Kentucky Primary at the Kentucky Exposition Center in Louisville, Ky., on June 23, 2020. (Timothy D. Easley/AP Photo)
2022 Midterm Elections

Incumbents prevailed across the board in Kentucky’s U.S. House primaries on May 17.

In the 1st Congressional District, neither Rep. James Comer (R-Ky.) nor Democrat Jimmy Ausbrooks faced primary opponents on May 17.

Ausbrooks is a mental health counselor. He ran, but withdrew, from the U.S. Senate race in 2020 and is otherwise a relative political newcomer not expected to seriously challenge Comer in November.

In Congressional District 2, seven-term Rep. Brett Guthrie (R-Ky.) scored 75 percent of the vote with 38 percent of the districts reporting at 8:54 p.m. on May 17, according to Decision Desk HQ. He ran against challengers Brent Feher and Lee Watts in the Republican primary for the district.

Guthrie, who serves on the House Energy and Commerce Committee, has amassed $1.3 million in campaign funding in anticipation of November’s election. According to OpenSecrets.org, he has garnered significant financial support from “health care professionals,” pharmaceutical companies, and telecom service providers.

Watts, who has mostly campaigned via his Patriot Point podcast, is a U.S. Air Force veteran and former chaplain for the Kentucky General Assembly. With 38 percent of the districts reporting, he drew 20 percent of the primary tally, while Feher, a small-business owner from Owensboro and a political newcomer, registered 4 percent.

The race in this district was too close to call at 10:10 p.m. with more than 95 percent of the precincts reporting.

Stuart Ray, founder of Louisville-based Peregrine Co. and former Kentucky Department of Fish & Wildlife commission chair, was less than half a percent ahead of real estate agent Rhonda Palazzo.

Ray’s April Federal Election Commission (FEC) filing shows $339,884 in campaign funds with more than $100,000 coming from his own pocket.

The winner of that primary race will face the heavily favored Morgan McGarvey, who defeated three-term state Rep. Attica Scott in a spirited Democratic primary, 64 to 26 percent, with more than 95 percent of the districts reporting at 9:52 p.m., according to Decision Desk HQ.

McGarvey, the Kentucky Senate minority leader after serving a decade in the chamber, has been endorsed by the retiring Rep. John Yarmuth (D-Ky.), who remains popular in the state’s only Democrat-dominated district.

But five-term incumbent Rep. Thomas Massie (R-Ky.) ultimately easily brushed aside three challengers after former President Donald Trump, who had criticized him in the past, issued a late endorsement of the incumbent last week, calling him a “first-rate defender of the Constitution.”

The boost may not have been needed for Massie to defeat his primary challengers in garnering 75 percent of the vote, with 78 percent of the districts reporting at 9:27 p.m., according to Decision Desk HQ.

Real estate agent Claire Wirth, who argued that Massie—recognized as an ultra-conservative—wasn’t conservative enough, got 16 percent of the tally, while perennial independent candidate Alyssa Dara McDowell of Covington notched 5 percent and George Foking Washington, an Independence filmmaker who campaigned exclusively via YouTube, scored 4 percent of the Republican primary vote.

Massie had raised $731,985 for his campaign by mid-April, according to his FEC filing, and will face Democrat Matthew Lehman, who ran unopposed in his party’s primary.

Lehman is CEO of Louisville-based Koligo Therapeutics, a regenerative medicine company purchased last year by biotech firm Orgenesis for $15 million. He listed $73,218 in campaign funds in his April FEC filing.

Rogers, 84, has represented the district, which spans eastern Kentucky from Somerset to Ashland, for 42 years and is currently the longest-serving member of Congress. Only the late U.S. Rep. Don Young (R-Alaska) had served longer in Congress than Rogers. The Alaska Republican was his state’s lone House representative for 48 years.

The incumbent had $453,296 in his campaign coffers in April, according to his FEC filing.

Rogers will be heavily favored in November to win a 22nd term in the House when he faces Democrat Conor Halbleib, a University of Louisville law student, who ran unopposed in his party’s primary. Through mid-April, his campaign hadn’t filed with the FEC.

Five-term U.S. Rep Andy Barr (R-Ky.) swept past Lexington business owner Derek Leonard Petteys in their non-competitive primary contest, garnering 88 percent of the vote with 86 percent of the precincts reporting at 9:33 p.m., according to Decision Desk HQ. Barr will be heavily favored against a Democratic newcomer in November.

Barr serves on the House China Task Force, which was created to combat the Chinese Communist Party’s threat to the United States, and on the House Financial Services Committee. He has $2.574 million in his campaign war chest, according to his April FEC filing.

He’ll face either Christopher Preece, a Berea High School science teacher or perennial progressive hopeful Geoff Young in their match-up. The race between Preece and Young was too close to call by 10 p.m., with 93 percent of the districts reporting.

Young’s campaign reported $96,184 in contributions in its April FEC filing. Preece’s campaign had $28,860 in its coffers.