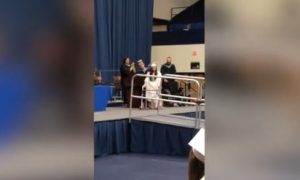 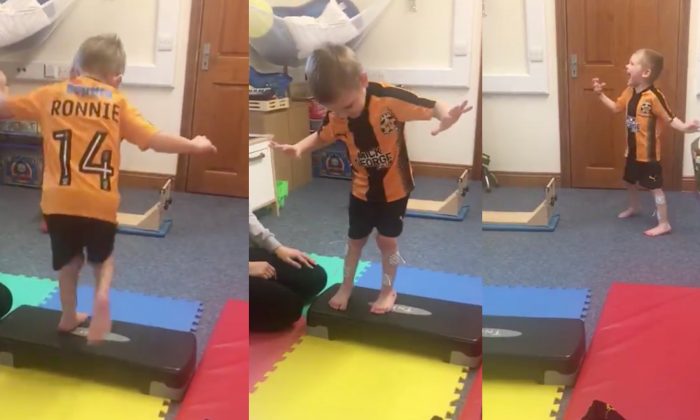 Ronnie Leys from Saffron Walden, Essex walked his first steps without splints after an operation. His father captured it in an inspiring video that went viral on Twitter. (Steve Leys/Twitter)
Kids

Four-year-old Ronnie has cerebral palsy, and he has recently become a darling of the internet. His shouts of joy after taking his first steps without splints after an operation has won numerous hearts on the web.

Ronnie Leys from Saffron Walden, Essex was born through emergency c-section and suffered brain damage because of oxygen starvation as his umbilical cord was wrapped around his neck.

Doctor’s had once described his MRI scans as “something from a horror movie,” but today Ronnie is able to dance, swim and even play football, according to Daily Mail UK.

“Ronnie was a late developer with walking and started at age 2 years and 2 months,” the boy’s father Steve told Daily Mail UK. “Since then he has really come on from strength to strength and is a keen sportsperson.”

Learning to Walk Without Falling

The boy’s condition didn’t allow him to walk with stability, and he needed surgery called selective dorsal rhizotomy (SDR) to walk without falling. The expensive surgery wasn’t covered under the country’s National Health Service, so Ronnie’s parents Steve, 31, and Clare, 36, started fundraising in Feb. 2018.

According to Daily Mail UK, Ronnie underwent an operation in October and is currently under an 18-month-long physiotherapy schedule that involves three grueling sessions a week.

50k + in views 👀 Ronnie is the man 👏🏼 one day he can look back on all he has achieved with so much pride 💙 for those who would like to read up on his story please check https://t.co/P4cSMoYVOK & @RunRonnieRun1

The viral video shared by Steve on Twitter shows Ronnie wearing the jersey of his favorite soccer team, Cambridge United. He screams in joy as he walks without splints from one end of the room to the other.

“He attends swimming lessons, dance and music lessons weekly and is a member of ‘Cambridge In The Community’ cerebral palsy football team which is without doubt his biggest passion—and playing football is one of the many reasons behind his incredible journey and progression to date,” said Steve.

Ronnie’s biggest fan is his two-year-old brother, Frankie who helps his parents take care of his older brother.

These are the links to read Ronnie’s story & still time to donate on his page 💙 https://t.co/MKAlkTeDafhttps://t.co/A5mal2p8Vu

“Clare takes him to physio when I’m at work. She’s been by his side as much as anybody throughout his journey,” said Steve.

The doting parents are delighted by Ronnie’s recent improvement.

“Ronnie tried doing a few steps without his splints today, you will see by his reaction what it meant to him & what a little fighter he really is. We are all bursting with pride for our inspirational son,” Steve tweeted with the video.

Steve and Clare were able to raise around $63,000 in 12 months and are continuing to raise more as Ronnie is undergoing regular physiotherapy and will require more in the future as well.

Ronnie breaks the USA 🇺🇸 as he features on an American tv programme @RightThisMinute 👏🏼 representing the cerebral palsy warriors to the full here 💯 so proud of what he is achieving and for all the support he is receiving worldwide 💙@RunRonnieRun1 #RunRonnieRun #Fighter https://t.co/QhsI1EbSXm