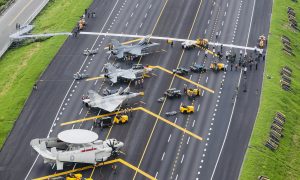 An increasing number of Americans believe President Donald Trump has both the personality and the leadership qualities a head of state should have, according to data from a new Gallup poll released on May 28.

Today, 40 percent of Americans (or 4 in 10) say Trump has such qualities, a 6-point increase from two years ago when 33 percent voted along those lines.

The growing support for Trump’s character came from votes across all political spectrums, including Republicans, Democrats, and independents.

In 2017 around the beginning of his administration, 74 percent of Republicans believed Trump had the qualities of a president. In the latest poll, however, the number of Republican support had risen by 7 percentage points, reaching a total of 81 percent.

The number of Democrats who think Trump had such qualities also increased from 6 percent in 2017 to 13 percent in the latest poll. For independents, a similar rise occurred, with 31 percent believing in Trump’s qualities, an increase of 4 percentage points from 2017.

According to Gallup, more Americans rate Trump positively for his issue positions than his character, with 47 percent saying that they agree with Trump “on the issues that matter most to them.”

Trump’s rating on issues was similar to his two predecessors, former president Barack Obama, and George W. Bush. His rating on these issues, like the one on his character, increased from when Gallup asked the question in 2017. At that time, 39 percent rated Trump favorably for his issue positions.

Gallup pollsters say Trump can increase his chances of re-election if he focuses more on key issues that matter to American voters.

“His [Trump’s] chances of winning re-election appear greater if the campaign is decided on issues rather than character,” the pollsters wrote in their analysis. “His two immediate predecessors were viewed similarly to him on issues but were rated far superior on character. Both ultimately won re-election.”

Data from the latest Gallup poll came from telephone interviews conducted from April 17 to 30 with a random sample of 1,024 adults. The poll has a margin of sampling error of 4 percentage points.

Results from a separate Gallup poll released earlier in May found a record high percentage of Americans who approve of the job Trump is doing.

The approval rating hit 46 percent in the April 17–April 30 poll, coinciding with the release of special counsel Robert Mueller’s final report, which established that the 2016 Trump campaign did not collude with Russia to influence the election.

The report contrasted with the incessant coverage in legacy media that was largely supportive of the collusion narrative and, at times, false. The public response to the news appears to be reflected in the poll.

Obama had an approval rating of 43 percent to 44 percent at the same point of his first term in the Gallup poll.

Read More
Bill Moving Through California Legislature That Would Keep President Trump Off Primary Ballot Unless He Releases Tax Returns
Evangelist Franklin Graham Calls for Prayer to Strengthen Trump Against Foes
Lara Trump on Being a Trump in the Era of Fake News, Socialism, Border Crisis, Lead-up to 2020
Why Trump Will Win the US–China Trade War—Stephen Moore

Trump has faced overwhelmingly negative coverage in the legacy media. Of statements marked positive or negative, 90 percent were negative in the Trump coverage on the ABC, CBS, and NBC evening newscasts, according to the Media Research Center (MRC), a right-leaning media watchdog.