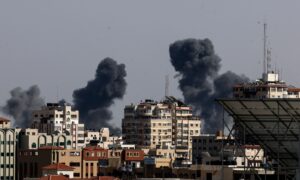 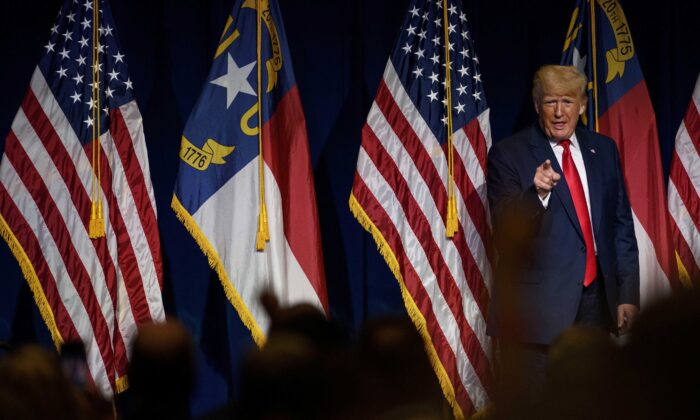 In Your Heart Do You Believe Trump Is Right?

In the 1964 presidential campaign, Republican candidate Barry Goldwater had a slogan: “In your heart you know he’s right.”

That was aimed at deflecting the stereotype about Goldwater and Republicans in general that they were an uncaring lot. It is a smear that still works to some extent for modern Democrats.

In his return to political campaigning last Saturday, former president Donald Trump channeled Goldwater when he claimed vindication for many of the positions he took during last year’s presidential campaign and in the four years of his administration.

Speaking to a gathering of North Carolina Republicans in Greenville, Trump touted his accomplishments, including tax cuts and regulation reductions. He also criticized what he said were President Biden’s “insane executive orders.”

He might have added Middle East peace deals, including the Abraham Accords. He said President Biden is working to reverse all of his achievements and mentioned rising gas prices as a consequence that can be felt by nearly every American.

If it can be proved beyond a reasonable doubt that China was the source of the COVID-19 virus and that Beijing irresponsibly and callously allowed it to spread around the world, Trump said China should be forced to pay at least “$10 trillion in reparations.” If it refuses, he said, then a “100 percent tariff” should be imposed on all goods made in China entering the United States. It is a good idea, but one the Biden administration is unlikely to adopt.

There were a few bizarre comments, including his claim that North Korean dictator Kim Jong-un “is a different kinda guy,” but then Franklin Roosevelt referred to Joseph Stalin, another murderous dictator, as “Uncle Joe.” In 1940, Time magazine named Stalin its “Man of the Year” and most journalists in that era ignored Stalin’s gulags and forced starvation, so maybe we’re even.

Trump claimed “radical left prosecutors” in New York have been “paid hundreds of thousands of dollars” for their campaigns for office in order to see him indicted, convicted, and put in prison. He accused them of “prosecutorial misconduct”(is this correct?) and the familiar “fishing expedition.” A New York grand jury last week called its first witness, a former employee of the Trump organization.

The red meat kept getting tossed to the receptive audience. He criticized the teaching of critical race theory and endorsed school choice. He also peppered his sentences with some vulgar language, which probably did not appeal to Republicans in a state with a large Christian and conservative population.

After more than an hour, I had hoped that Trump was not going to mention the last election. Silly me. Trump spoke of the “election hoax” and beyond that was the familiar accusations most people have heard ad-infinitum.

Outgoing Israeli Prime Minister Benjamin Netanyahu seemed to be channeling Trump when he claimed the most recent election and the fragile coalition government cobbled together to oust him after 15 years in power was also illegitimate.

The past can’t be changed and so Trump should be directing his energy and efforts to next year’s critical congressional elections. The late Washington football team head coach George Allen used to say, “the future is now.” That should be Trump’s focus.

Trump’s best line of the night came near the end. It was in response to critics who say he is damaging our democracy with his talk of election fraud. He said, “I am not the one trying to undermine democracy, I am the one trying to save it.”

That’s a line he might continue to use. It has a nice ring to it, similar to “in your heart you know he’s right.”