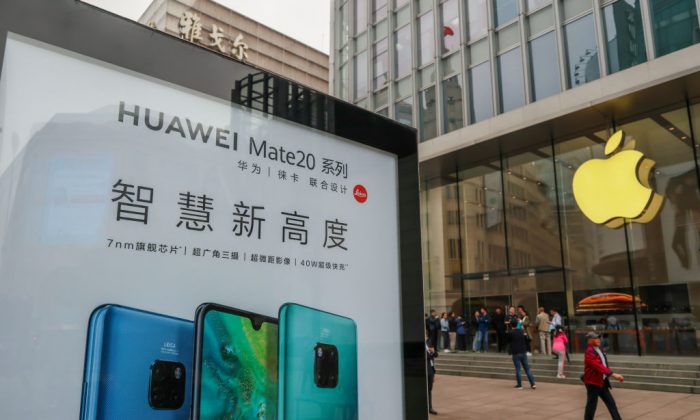 A Huawei poster is displayed outside an Apple store in Shanghai on Oct. 26, 2018. (STR/AFP/Getty Images)
Chinese Regime

A number of Chinese companies have announced corporate policies in support of Chinese tech giant Huawei’s products while shunning Apple’s iPhones since Huawei’s chief financial officer was arrested in Canada earlier this month on suspicion of fraud.

Meng Wanzhou, who is the daughter of Huawei founder Ren Zhengfei, was arrested in Vancouver, Canada, on Dec. 1 at the request of U.S. law enforcement. She is accused of engaging in activities to skirt U.S. sanctions on Iran, and faces extradition to the United States.

Chinese news portal Sina, in an article published Dec. 10, listed several Chinese companies that have taken measures to support Huawei in a sign of nationalistic solidarity with the beleaguered firm, with screenshots of company directives announced after news of Meng’s arrest.

Menpad, an LCD display maker based in Shenzhen, issued a notice dated Dec. 7 on its website. “If employees buy any iPhones, they will be punished with a 100 percent penalty on the basis of the phone’s market price.” Conversely, “if they buy a Huawei or ZTE cellphone, the company will provide a 15 percent subsidy, based on the market price.”

In April, Huawei competitor ZTE was slapped with a U.S. export ban for violating court agreements it made after pleading guilty to evading U.S. sanctions on Iran and North Korea. The ban crippled ZTE’s business and revenue, since many of its products require U.S. tech components. The company only resumed work in July after the U.S. lifted the ban on the conditions that ZTE would pay a $1 billion fine and submit to strict compliance measures.

In other announced measures, Menpad stated that the company’s future product designs would prioritize the use of Huawei’s own smartphone semiconductor chips. Additionally, the company and its employees should not buy U.S.-branded vehicles, the company said.

Sina reposted a screenshot of a Dec. 7 notice issued by Youfei Electronics, an electronics and software developer based in Shanghai. “After a decision made by the company’s board of directors, the company will pay for employees’ purchases of Huawei cellphones and laptops, beginning today until Dec. 31, 2018. Each employee is limited to 2 items of purchase.”

Meanwhile, RYD Information Technology, an IT provider for construction, automobile, and aerospace clients, issued a memo stating that the company will now buy exclusively Huawei products and software. Additionally, the company provided a 15 percent subsidy for employees’ purchases of Huawei products for personal use.

Yutangfu, a restaurant, hotel, and resort management company based in Zhanjiang City in Guangdong Province, said it would provide purchase coupons valued at 500 yuan (about $72.6) for new purchases of Huawei cellphones, in a corporate document dated Dec. 9. Any employee who purchases an iPhone would be disqualified from the company’s good-employee recognition, and be deprived of their yearly bonuses.

Yutangfu’s document stated that, amid the current trade war between China and the United States, everyone in the company “is responsible for the rise and fall of our country.” The company’s 500-yuan payment would be effective until Dec. 31, 2019.

The Nanchong Chamber of Commerce in Shanghai stated in an announcement Dec. 9 that Meng’s arrest was the United States’ attempt to curb China’s rise; therefore, Chinese citizens should support domestic brands. The announcement stated those in the organization found to have purchased Apple products would be stripped of their official positions.

Additionally, the Chamber stated that anyone who decided to purchase a Huawei cellphone before Jan. 5, 2019, would be entitled to a 10 percent subsidy.

On Sina Weibo, China’s equivalent to Twitter, some Chinese netizens supported the Apple boycott by these Chinese companies. Others were quick to point out the problems behind the ban.

One netizen with the moniker “Rule_of_law__” from coastal China’s Jiangsu Province wrote, “In the name of patriotism, these companies have violated labor laws.” His comments drew over 4,800 thumbs-up.

Several netizens were quick to point out the irony behind the ban: Huawei uses the Android operating system on its cellphones, which is developed by American tech giant Google.

While there’s no sign that Beijing is behind the current spate of Apple product boycotts in response to Meng’s arrest, the Chinese regime has a history of using propaganda through state-run media to manipulate public opinion and consumer habits in order to serve its interests.

Last year, China’s state-run media made an all-out effort to advise people to boycott South Korean products, after South Korean conglomerate Lotte agreed to lease some land to host THAAD, a U.S. anti-missile defense system installed in the wake of increased North Korean nuclear testing. The military installation angered Beijing, claiming that the anti-missile system could be used to spy on Chinese airspace.