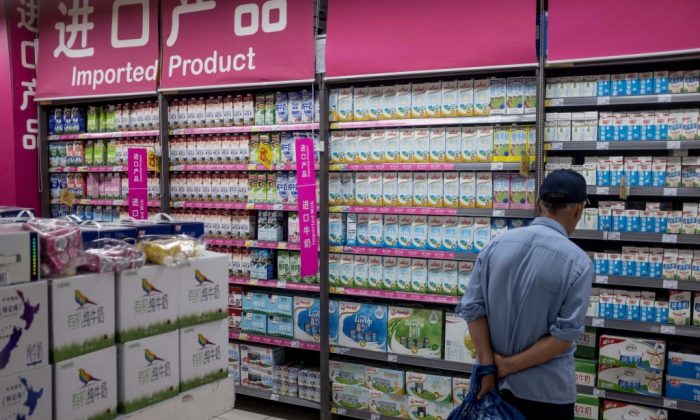 A man looks at imported products at a supermarket in Shanghai on April 11, 2018. (Johannes Eisele/AFP/Getty Images)
China-US News

China announced more U.S. imports after the latest trade agreement with the US
By Frank Fang
Print

After China and the United States issued a joint statement on trade negotiations this past weekend, the two countries have set aside their trade war for the time being. The Chinese regime promised to buy more American goods and open up its markets.

Many Chinese citizens have applauded the decision, anticipating that they can finally buy more American imports.

Speaking to Radio Free Asia (RFA), several mainland Chinese spoke of their shopping desires. Mr. Li from Guangzhou, a city in southern China, said: “Chinese surely want to see imports of daily commodities [from the U.S.] because these U.S. products are safe, hygienic, and reliable,” according to a May 21 RFA report.

Li believed that if China’s recently imposed tariffs on U.S. agricultural goods were scrapped—a possibility being discussed in continued negotiations between the two countries, the products should be fairly affordable. “Chinese have been troubled by poisonous food and other substandard products made in the country,” he said.

Mr. Hsu from Jiangsu Province, located on China’s eastern coast, said he would like to see more imports of U.S. movies and television programs. Hsu explained, “China has imposed control over U.S. culture, preventing people from being exposed to different views on life, values, and the world.”

China has a quota system for foreign films, with an annual limit of 34 movies from the United States that are allowed to be screened in China’s movie theaters.

Mainland Chinese were optimistic that their shopping options would broaden after the announcement of the U.S.-China joint statement on May 19.

In the statement, both sides agreed to take measures to “substantially reduce the United States trade deficit in goods with China,” with “meaningful increases in the United States agriculture and energy exports.”

China also acknowledged that buying more American goods and services would “meet the growing consumption needs of the Chinese people.”

But whether mainland Chinese would get their wishes remains to be seen. The Chinese Communist Party has a history of manipulating public opinion and consumer habits in order to serve its interests. Propaganda through its tightly-controlled state media has often swayed people to buy up or boycott products from certain countries.

It is a reality in China that politics and business are intertwined. “Nationalism is a weapon in China’s diplomatic armory,” wrote The Economist in March 2017.

Lotte’s supermarkets in China were suddenly subjected to safety inspections and tax reviews by the Chinese authorities. Scores of Chinese boycotted South Korean products and stopped traveling to the country, a popular tourist destination.

The Chinese regime sent mixed signals after the joint statement was announced. The Global Times declared it a “joint victory for both countries,” but also hinted at China’s hostile stance. “If the United States simply couldn’t provide the goods that the Chinese market needed, and Chinese consumers wouldn’t buy up what’s provided, then any agreement from both sides on reducing trade deficit would be nothing more than empty promises.”

Kay Lam, a writer and columnist based in Hong Kong, questioned China’s motive in agreeing to the joint statement, in an opinion piece published on the RFA website on May 21.

Much like how China has failed to fulfill its promises when joining the WTO (World Trade Organization), wrote Lam, it would eventually turn back on its commitments in the joint statement.

One such trade violation is steel dumping. The American steel industry has accused the Chinese regime of flooding the U.S. market with cheap steel made by Chinese manufacturers with government subsidies. In March, the Trump administration announced anti-dumping duties on imported steel and aluminum from a list of countries, including China.