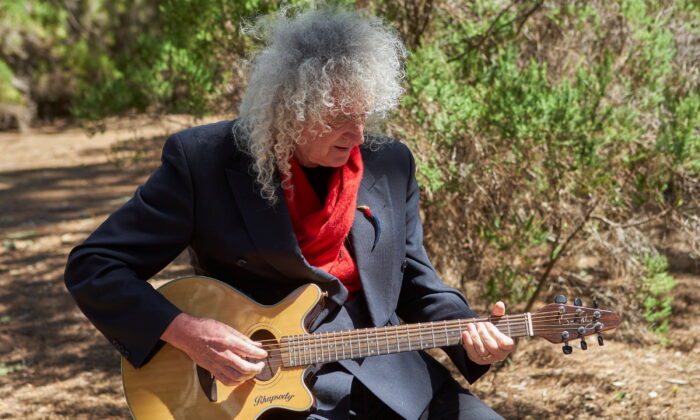 In Spanish Debut, Brian May Sings About ‘Another World’

LONDON—Decades after studying the skies above the Canary Islands for his PhD in astrophysics, Queen guitarist Brian May has returned to film his Spanish singing debut “Otro Lugar,” a translated version of his old song “Another World.”

The 74-year-old music star travelled to Tenerife, La Palma, and El Hierro to record his new music video as part of a remastered version of his 1998 solo album also called “Another World”.

The new album features two versions of the song—in English and in Spanish—with a video for the Spanish version released on Friday.

“It’s magical up there. You’re above the clouds the whole time,” May told Reuters of Tenerife’s Teide Observatory, which he first visited in 1970 while studying for his PhD.

“They call it the sea of clouds … And to me, it’s the closest to heaven I can ever be.” May worked with a friend to translate the song, his first entirely in Spanish. He described it as romantic and “about trying to reach a place where the world is better run.”

“We shot both versions … and the Spanish version came out much better,” May said. “It flowed from me very easily.”

May, who shot to global fame with Queen, said he re-released “Another World”, his second solo album, to reach new audiences. He re-issued his 1992 debut solo album “Back to the Light” last year.

“I feel I put my heart and soul into these two albums … and none of it’s been available to the new generation for years and years as you can’t get it on Spotify or Apple Music or whatever YouTube … so I felt I wanted to be represented,” he said.

“I also think it’s very relevant … I feel if I was making an album now, I’d make it exactly like this. I would have the same concerns in my heart, more so now because of the terrible state the world is in at the moment.”

Later this month, May will embark on a UK and European Queen + Adam Lambert Rhapsody Tour, which was twice postponed due to the COVID-19 pandemic.

“It’s like kind of having your legs cut off if you’re a performer when you can’t get out there and do what you do,” May said. “So for us, it will be … a stupendous moment in time when we can resume the stuff that we meant to be doing.”