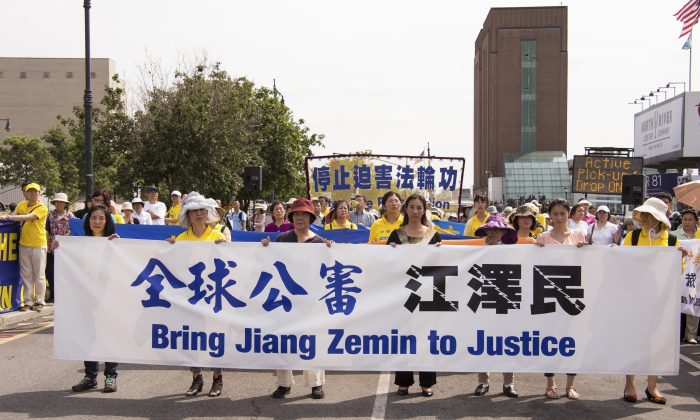 Falun Gong practitioners at a rally in front of the Chinese embassy in New York City on July 3, 2015, to support the global effort to sue Jiang Zemin. (Larry Dye/Epoch Times)
China

Few Chinese citizens are able to openly accuse former leaders of the Chinese Communist Party of committing a felony, and themselves escape official retribution. A Chinese lawyer, however, succeeded in denouncing a former Party leader during a sensitive court trial in a southern province and secured freedom for his client while retaining his own.

The outburst by attorney Zhang Zanning, also a lecturer in the law faculty at Nanjing’s Southeast University, and the absence of any punishment, is suggestive of a slightly less frosty political climate surrounding the persecution of Falun Gong—traditionally one of the most politically sensitive subjects in China and the subject of the trial—at least when compared to years past.

Jiang Zemin is the real criminal … and the 610 Office which Jiang created to persecute Falun Gong is an extralegal organization that should, by law, be disbanded.
— Zhang Zanning, Chinese attorney and law faculty lecturer

Zhang told the judge in a district court in the city of Heyuan in Guangdong Province on Nov. 27 last year that his client, Falun Gong practitioner Wu Hongwei, hadn’t broken any of China’s laws in putting up 158 Falun Gong banners around the city. In fact, Zhang said, “the one actually undermining the law is Jiang Zemin,” according to New Tang Dynasty Television, a Chinese-language broadcaster based in New York.

“Jiang Zemin is the real criminal … and the 610 Office which Jiang created to persecute Falun Gong is an extralegal organization that should, by law, be disbanded,” Zhang continued, addressing the court. His statements drew thunderous applause from spectators in the courtroom.

Fifteen days later, Wu Hongwei was freed on bail after spending over a hundred days in detention. Zhang said that he, himself, has “not been subjected to overt persecution” for his remarks, according to a Jan. 2 report from the Chinese-language Voice of America, a broadcaster funded by the U.S. government.

The courtroom scene and result in Guangdong would be unheard of even two or three years back. Lawyers who take on Falun Gong cases typically find themselves harassed by police before trial, hushed and threatened by judges before they can mount a defense in court, and almost never get their clients out. In the worst cases, they find themselves in illegal custody, where they have been subject to the same brutal torture meted out to Falun Gong practitioners.

Commentators say that while the Guangdong case and other instances of the regime’s tolerance toward Falun Gong last year reflects the changing attitude of the Party’s top leadership and individual officials toward the practice, the status of the persecution remains unchanged in lieu of a formal policy shift. There are also countercurrents, for instance in northern China, in which the persecution is being given new energy at the local level.

Falun Gong, a traditional Chinese self-cultivation practice whose adherents perform slow exercises and follow the moral teachings of truthfulness, compassion, and tolerance, was targeted for brutal persecution by the Chinese communist regime since July 20, 1999, on the orders of then Party chief Jiang Zemin.

Lawyers who defended Falun Gong practitioners in the earlier years of the persecution almost immediately found their legal careers and personal safety at risk. The most prominent case is that of Gao Zhisheng, a renowned human rights attorney who spent the better part of the last decade under some form of detention and was brutally tortured for months for offering legal support to practitioners and denouncing the regime.

However, the 16th year of the persecution campaign saw a handful of incidents that seemed to indicate a shift, however subtle, in the stance toward Falun Gong on the part of some Party institutions.

Whether these cases are part of a trend, or mere flukes amid tightening repression elsewhere, is unclear.

If anything, the Guangdong case “exhibits several important facts about the real situation on the ground in China” with regard to Falun Gong, according to Levi Browde, the executive director of the Falun Dafa Information Center.

“Anyone suspected of practicing Falun Gong or supporting those who do remains at risk of detention, torture, or even death in China,” Browde wrote in an email.

While the actions of lawyers and even regular Chinese citizens who submit petitions to the authorities on behalf of Falun Gong practitioners show growing sympathy toward the practice at the grassroots level, predicting the official line is trickier.

“It’s hard to say that the Chinese Communist Party is changing its policy toward Falun Gong,” said Yiyang Xia, senior director of Research and Policy at the Human Rights Law Foundation. “Without the formal decision from the Politburo or its Standing Committee, the persecution is still going on in China, with some areas still severe, such as Heilongjiang, Liaoning, Hebei, Shandong, and Jilin.”

According to a Jan. 3 report on Minghui, the local authorities in Jilin had in 2015 tried and sentenced over 30 practitioners to jail, 11 of whom lodged criminal complaints against Jiang Zemin. And the authorities in the Jiansanjiang area of Heilongjiang in eastern China continue to ignore calls by a group of rights lawyers to close an illegal brainwashing facility in the area that is notorious for persecuting practitioners.

But though the “persecution machine is still working,” the regime’s top leadership doesn’t appear to protect those who involve themselves in the endeavor anymore.

“The recent fall of different levels of officials who participated in the persecution under the name of anti-corruption campaign indicates that the persecution of Falun Gong is no longer a protective umbrella,” Yiyang Xia told the Epoch Times in a note.

“Many realized the change in the wind and tried to distance themselves from the persecution.”