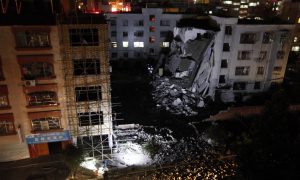 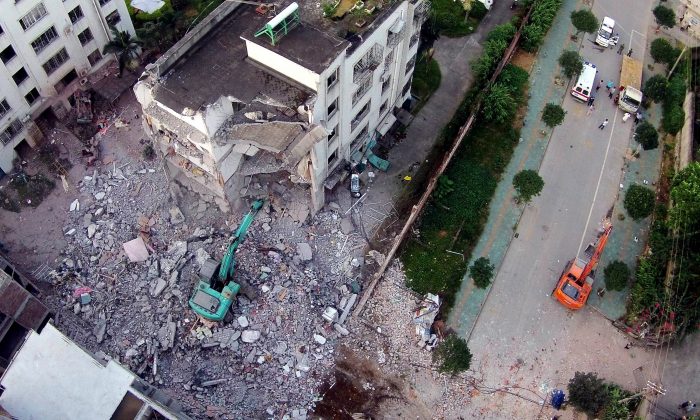 A damaged building is seen a day after a series of blasts in Liucheng county in Liuzhou, south China's Guangxi province on Oct. 1, 2015. (STR/AFP/Getty Images)
China

There were allegedly 18 explosions in southeastern China’s Guangxi Autonomous Region in the late afternoon of Sept. 30. The explosions wrecked vehicles, caused a residential block to cave in, and shattered the windows of several shops and the local government building. According to state media, 10 people were killed, and 51 people were injured.

Within a few hours, Chinese police declared the blasts a criminal case, but not an act of terrorism. They identified just one suspect, a 33-year-old quarry worker named Wei Yinyong, and released his personal details.

Two days later, police claimed Wei “died at the explosion scene,” citing DNA tests. Wei was just another troubled citizen, police said—he quarreled with nearby villagers, the “relevant units” at his workplace, and expressed anger toward the local government in posts on Chinese social media.

The explosions, police explained, were caused by bombs that Wei had either mailed in parcels, or personally timed to detonate outside several public locations in Liucheng County and neighboring Liuzhou City.

Meanwhile, Chinese censors ensured an almost complete blackout of the news. Social media posts and photos on the blast by Chinese netizens were swiftly deleted. The communist regime’s propaganda department ordered local media not to send reporters to cover the incident, and instead use dispatches from the state mouthpiece Xinhua News Agency, according to an official statement that was leaked on the Internet.

The idea that a quarry worker launched the attacks is plausible. Quarry workers are at times trained to work with explosives, and it’s possible Wei obtained the explosives from a job site.

But Wei Yinyong might not have been acting alone. Delivery man Mr. Kuang, was contacted by Wei to deliver two parcels that turned out to be bombs. He told Chinese tabloid Southern Metropolis Daily he was instructed to contact a Wei Dongxi when he arrived at the delivery destination.

After Mr. Kuang called and spoke to the other Wei, who had an accent different from Wei Yinyong, one of the parcels exploded, blowing his fingers off, but not killing him. The Southern Metropolis Daily article was removed from the publication’s website shortly after it was posted.

Based on the few details on who was behind the bomb attack, the heavy censorship, and the convenient manner in which Chinese police arrived at a conclusion, there could be more behind the attack.

Chinese authorities have already ruled out terrorism, which under its broad definition, would likely narrow the scope of the attack to either a mentally disturbed individual or to a political or military faction within the Chinese Communist Party.

After a chemical warehouse exploded with the force of 21 tons of dynamite in the northern port city of Tianjin, one of first responses of Party leader Xi Jinping was to see if a rival political faction, led by former Party leader Jiang Zemin, was behind it.

The possibility of political infighting has been mentioned by some Chinese analysts assuming that Jiang Zemin was behind it, and it’s likely the same suspicions are being raised by some of the  Party elite.