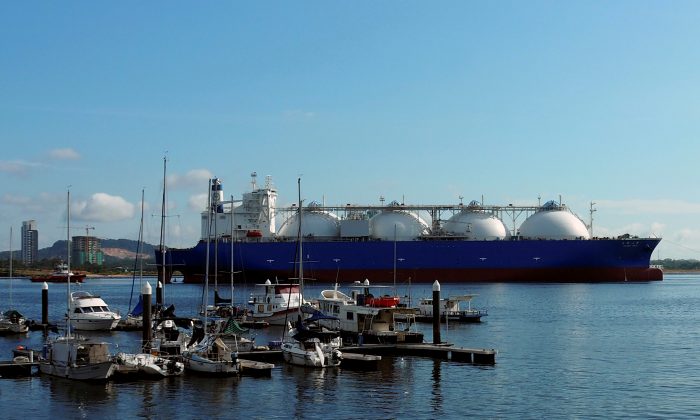 An LNG tanker is seen off the coast of Singapore February 3, 2017. (Gloystein/File Photo/Reuters)
Markets

LONDON—The race is on for liquefied natural gas (LNG) producers to build export terminals as demand soars, but the criteria for financing such mega-projects have shifted as traditional relationships with LNG consumers have begun to disintegrate.

Royal Dutch Shell’s final investment decision (FID) taken last month for a $30 billion LNG Canada project was a shot in the arm for the LNG industry, which is emerging from almost three years of low prices and investment.

As a vote of confidence in the LNG market, Shell’s decision is expected to get the ball rolling on a wave of approvals for dozens of similar projects around the world that have been planned for years but not yet finalized.

But the FID represented a different financing structure, unreliant on commitments from large buyers as previous mega-projects had been, such as the recently commissioned Ichthys facility in Australia or the U.S. Sabine Pass plant.

Instead, Shell will absorb the cost into its budget and will effectively worry about the ultimate buyers later—as one of the largest corporate purchasers of LNG in the world, it can absorb the new volumes into its global portfolio.

Demand for LNG is there—it is expected almost to double to 550 million tonnes a year (mtpa) by 2030, leaving room for plenty more export terminals despite an influx of fresh supply from new, mostly U.S., terminals.

But projects have struggled to find offtakers as the world’s biggest buyers in Japan and South Korea seek nimbler terms while others such as India and Pakistan are less creditworthy.

“Projects that require buying commitments are really struggling to find buyers to sign up … I don’t see a lot that is happening,” said Vivek Chandra, chief executive of Texas LNG, which plans a medium-sized project of the same name.

“I don’t know what the buyers are waiting for because the golden opportunity to sign up for deals was yesterday,” he told a conference this month, referring to historically low LNG prices in recent years before they began rising last winter.

Aside from 50 mtpa of supply due from U.S. projects under construction, 17 new U.S. terminals like Texas LNG need FIDs. Other plans dot the world from Qatar’s expansion to plants in Russia and Mozambique as well as Southeast Asia.

Of all these projects, only a handful in the United States will ultimately be built and for others, the ability for the operator to absorb LNG into its portfolio will be key.

“The projects that we might see now are the ones that don’t rely on offtake agreements,” said Frank Konertz, LNG analyst at S&P Global.

Irrespective of price, long-term offtake commitments are risky today because the global LNG market is undergoing fundamental changes as it grows and increases liquidity.

It needs to solve quandaries such as the pricing mechanism for LNG, traditionally linked to oil, and absorb new technology that shifts the commercial calculations of trading the gas.

“The whole market is in an in-between phase,” LNG analyst Emma Richards at Fitch Solutions said. “LNG is becoming more akin to oil with greater spot and liquidity trading referencing benchmarks, but it’s a long process and it’s creating headaches.”

Partly as a result of these uncertainties, and because the market is gaining liquidity, the average duration of offtake deals has halved to less than eight years from almost 20 years in 2010 with volumes per contract falling to 0.75 mtpa from 2.25 mtpa, according to data from Shell’s 2018 LNG outlook.

Crucially, about 50 percent of such contracts have no credit rating at all compared to 100 percent in 2010 being A- or B-rated, Shell’s outlook showed. Shorter, smaller, less creditworthy contracts make financing multi-billion-dollar projects simply more difficult.

This makes projects by large portfolio players such as Shell, Total, and Exxon, which has promised FIDs in Mozambique and Texas next year, easier to finalize.

For U.S. projects, the field is getting tighter—Qatar Petroleum, the world’s largest exporter of LNG, said an FID for the Golden Pass project with Exxon was due in the next few months.

Qatar’s own huge expansion, expected to get FID next year, would increase capacity to 110 mtpa from current production rates of 77 mtpa.

And some non-U.S. projects have become attractive in light of China’s tariffs on U.S. LNG imposed in the midst of a trade war. Canadian projects in particular—there are five planned—will come at a cost to the Gulf Coast plans.

“For a lot of projects looking to sanction now, it’s a race against time,” Konertz said.