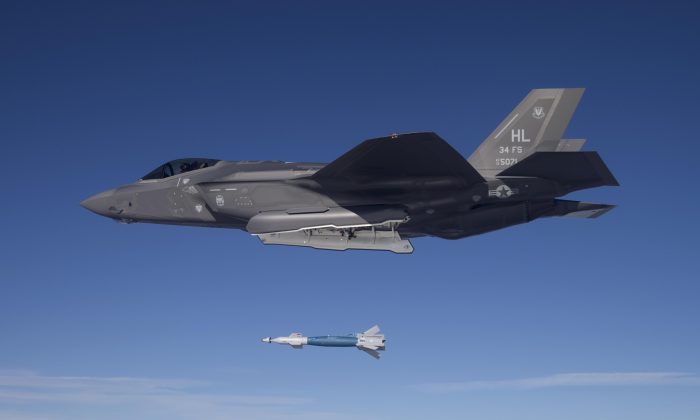 The Air Force has confirmed that an F-35 Lightning II fighter jet has dropped bombs in training for the first time.

The training mission was conducted by airmen from the 388th and 419th Fighter Wings in Utah on Feb. 26.

According to Lt. Col. George Watskins, 34th Fighter Squadron commander, the test marks an important step in the development of the F-35.

This is significant because we’re building the confidence of our pilots by actually dropping something off the airplane.
— Lt. Col. George Watskins

“This is significant because we’re building the confidence of our pilots by actually dropping something off the airplane instead of simulating weapon employment,” he said.

While the F-35s weapons systems have been tested before, it is the first time they were deployed by a combat unit.

The F-35 Lightning is a fifth generation fighter jet being developed by Lockheed Martin. The fighter jet, which is among the world’s most advanced, is years behind schedule amid sky-rocketing costs. The jet was intended to be opperational by 2012 but has had several major setbacks including problems with its engine. It is estimated that the project is $200 billion over budget so far.

The fighter jet contains some of the most advanced technology in the world. Notably, the plane has superior stealth capabilities.

“The pilots and weapons loaders in the 388th and 419th Fighter Wings are perfecting their skills,” said Lt. Col. Darrin Dronoff in a statement after the test.

Dronoff said the tests are imporant because the pilots testing the weapons will “also be the Airmen called upon to take the F-35 to combat.”

The pilots at the Hill Air Force Base will begin flying the F-35 in standard combat formations as early as march.