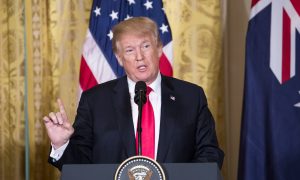 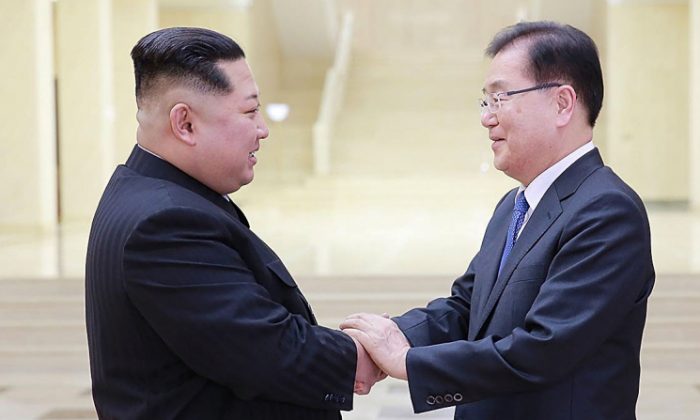 In Major Victory for Trump, Kim Jong Un Agrees to Denuclearization Talks With US

North Korean leader Kim Jong Un has agreed to hold denuclearization talks with the United States and promised to not attack South Korea with nuclear or conventional weapons, according to a top South Korean official who met with the communist dictator on Monday and Tuesday.

Kim’s agreement is a major victory for President Donald Trump, who spearheaded an international effort to pressure the communist regime to give up its aggressive nuclear weapons program.

“Possible progress being made in talks with North Korea. For the first time in many years, a serious effort is being made by all parties concerned,” Trump wrote on Twitter on Tuesday. “The World is watching and waiting! May be false hope, but the U.S. is ready to go hard in either direction!

A delegation from South Korea traveled to Pyongyang on Monday to meet with Kim Jong Un. The South Korean envoys, including heads of national security and intelligence, planned to travel to the United States to share about the contents of the discussion. They relayed Kim’s willingness to hold denuclearization talk shortly after the visit.

North Korea’s willingness to discuss ending its nuclear program is a major break from the communist regime’s stalwart stance on the issue and can be traced directly to Trump’s assertive foreign policy agenda.

South Korean President Moon Jae-in credited Trump for bringing about the early January talks this year between the two Koreas where the North agreed to send a delegation to the 2018 Winter Olympics. North Korea sent a large delegation to the games, including Kim’s sister, who met with Moon and invited him to visit Pyongyang for a summit. Moon did not immediately agree and sent the envoys instead. The envoys, in turn, delivered news that Kim is willing to discuss abandoning the nuclear weapons program.

“The North side clearly affirmed its commitment to the denuclearization of the Korean Peninsula and said it would have no reason to possess nuclear weapons should the safety of its regime be guaranteed and military threats against North Korea removed,” Chung said in a statement, according to Yonhap News Agency.

Chung also said that North Korea is ready to have “heart-to-heart” talks with the United States about its nuclear program and that it won’t carry out any more missile tests while the talks continue.

“It made it clear that while dialogue is continuing, it will not attempt any strategic provocations, such as nuclear and ballistic missile tests,” Chung said.

The two Koreas agreed to meet in April at the Peace House, a South Korean facility south of the inter-Korean border. The countries also agreed to set up a hotline between their leaders to reduce military tensions and to hold the first phone call between Kim and Moon ahead of the meeting in April.

The United States and North Korea both showed a willingness to talk, but the United States had a firm stance that the communist regime must agree to include abandoning its nuclear weapons program as part of any discussion. Tensions escalated last year after North Korea tested several ballistic missiles and what it claimed to have been a hydrogen bomb. Trump responded by threatening military action and intensifying sanctions.

“Chairman Kim said the denuclearization issue may be discussed as an agenda for the North-U.S. dialogue,” Chung told reporters, according to Yonhap. “What we must especially pay attention to is the fact that (he) has clearly stated that the denuclearization of the Korean Peninsula was an instruction of his predecessor and that there has been no change to such an instruction.”