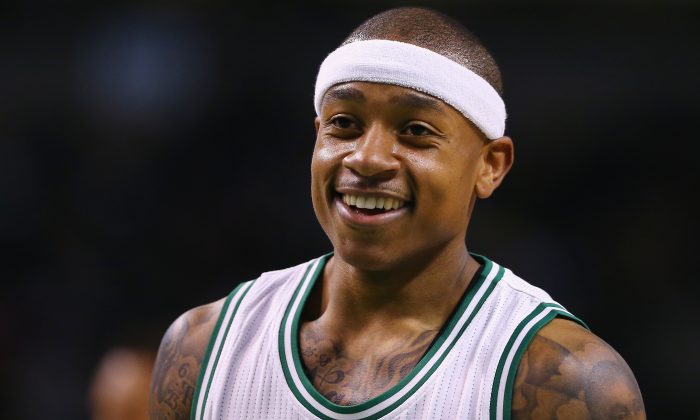 In League of Rebuilding Teams, Boston Celtics Look Furthest Ahead

In a league where front offices are garnering more attention amid a number of rebuilding schemes, Danny Ainge and the Boston Celtics look like they’re the furthest ahead.

The Utah Jazz, New York Knicks, Los Angeles Lakers, and Orlando Magic are among the teams that are looking to rebuild to get back in playoff contention. But, counting out the Milwaukee Bucks because their rebuilding scheme has already come to fruition, the Celtics are looking like they’re in the best position for the present and the future.

The Isaiah Thomas trade is just the latest move by Ainge, Boston’s president of basketball operations, that has set the Celtics up to get back in the thick of things sooner rather than later. Ainge surrendered only Marcus Thornton, a veteran that didn’t fit in with the young core, and a 2016 first-round pick from Cleveland for Thomas.

The 26-year-old Thomas is now the Celtics primary scorer and has an excellent four-year, $27 million contract that will look even better as time goes on. Thomas is pouring in 20.1 points a game and dishing out 5.4 assists in 26.6 minutes so far with Boston, leading the team to a 4-3 record, good enough to stay in the playoff hunt in the weaker Eastern Conference.

“He’s one of the most efficient offensive point guards in the NBA,” Ainge told the Boston Herald. “He’s one of–if not the–leading fourth-quarter scorers in the NBA. One thing our team has lacked is speed and pick-and-roll offensive play. That’s one of our glaring needs. And that’s what Isaiah gives us.”

Those were just the two latest deals for Ainge, one of the best in the business at rebuilding quicker than competitors.

Ainge sent away Paul Pierce and Kevin Garnett to the Nets at just the right time in 2013, acquiring a massive haul that included three first-round picks. He hasn’t stopped wheeling and dealing since, acquiring a slew of assets and players including Tyler Zeller and a bunch of additional draft picks.

The Celtics picked up two nice players in the first-round of the 2014 draft, one with a pick from Brooklyn. Marcus Smart and James Young are part of an exciting young core along with Zeller. Ainge also acquired Jae Crowder, a lockdown defender who can play positions 2-4 and shoot the three, in the Rajon Rondo trade, and acquired more picks in that deal and others, which included jettisoning Jeff Green.

Smart, Young, Zeller, Thomas, Crowder, Jerebko, Jaren Sullinger, and Avery Bradley comprise a core that can easily be in serious contention next season with just one big free agent addition, which can definitely happen since Boston will have up to $25 million available in cap space. Kevin Love and Greg Monroe are at the top of the Celtics’ target list.

The Celtics can also add several more top prospects to the roster–or package one or more in a mega trade–thanks to Ainge’s insane stockpiling of draft picks. The Celtics have their own first-round pick in the upcoming draft, as well as a first-round pick from the Los Angeles Clippers from the Doc Rivers trade. They’ll also get an early second-rounder from the Philadelphia 76ers.

The Celtics will, in addition, have as many as two extra first round picks and two second round picks in 2017.

For those keeping count, that’s a likely stockpile of eight first-round picks in the next three years, as well as 10 second-round picks, including Boston’s own picks.

Through his never-ending array of deals, Ainge has earned the respect of fellow general managers.

“He’s probably the best GM in the game,” Daryl Morey, who became GM of the Houston Rockets after working with Ainge at the Celtics, told NBA.com. “Look at the roster in ’03 when Danny took over, and his ability to win a title five years later — that transformation is unheard of, I’ve never seen anything like it. Now you look at the way he’s set up the Celtics today, and it’s the best I’ve seen someone go from losing a core to creating lots of future picks and flexibility to turn it around quickly. People don’t see it yet because it hasn’t turned the corner, but they will see it.”

Ainge will stay on the lookout for great deals and great players, but knows an important asset is patience.

“We can’t force it. We can’t just wish it or force it to happen, because that’s when mistakes are made. I’ve seen people that took advantage of opportunities; and I’ve seen people that settled. It could be a matter of the stamina that we collectively have as an organization between management, ownership, coaching and so forth,” Ainge said.

“Building a championship team, you need patience. And I’m patient. It’s my job to sell my owners and coaches on doing the right deals, and not just trying to find some shortcuts to success.”

Looking ahead to 2015-16, Ainge and the rest of the Celtics front office staff will have put Boston back in prime position just three seasons after the end of the “Big Three” era, a remarkable feat especially compared to the other rebuilding projects around the league.

The Orlando Magic were struggling so badly this season that coach Jacque Vaughn was fired. The Denver Nuggets have been among the worst teams in the league following a strong start and also had coach Brian Shaw fired. The Kings fired coach Mike Malone, kicking off months of subpar play. The 76ers, Knicks, and Lakers have all struggled this season.

New York and Los Angeles are going to go hard after free agents this offseason, as will some other rebuilding teams. But at this point Boston appears to be, in many ways, a much more attractive destination.