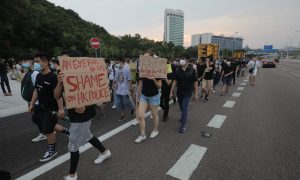 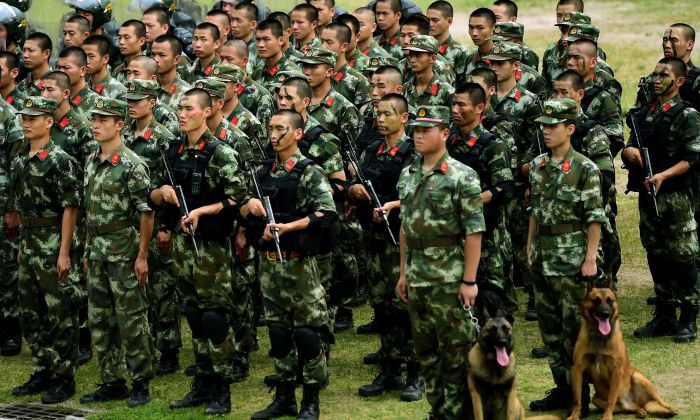 Chinese military have posted a social media message containing a warning that Chinese troops are at the ready at the Shenzhen Bay Sports Center, and can arrive in Hong Kong within 10 minutes.

The warning was widely viewed as a threat toward Hong Kong protesters, who have staged large-scale demonstrations throughout the city since June, in opposition to an extradition bill that would allow mainland China to seek extradition of individuals to be trialed in its opaque legal system.

The Eastern Theater Command, one of five regional divisions of the Chinese military, known officially as the People’s Liberation Army (PLA), posted the following message on its official WeChat account, “People’s Frontline,” on Aug. 14: “The Shenzhen Bay Sports Center is 56 kilometers (34.8 miles) away from the Hong Kong airport. Troops only need 10 minutes to arrive at the Hong Kong [border].” Protesters have recently staged a multi-day sit-in at the airport in an effort to inform international travelers about their demands for the Hong Kong government to fully withdraw the bill.

Satellite images collected on Aug. 12 by Maxar, a space tech company, appear to confirm that 500 or more armored vehicles from China’s paramilitary force are sitting on and around the soccer stadium at the Shenzhen Bay Sports Center.

The WeChat post also included an explanation of “ seven points of common knowledge,” hinting at the Chinese authorities’ capability to send troops to Hong Kong in the event of a crisis.

“According to item 18 of the Hong Kong Basic Law [the city’s constitution], if the Hong Kong government cannot control turmoil that threatens national unity or national security, the [rubber-stamp legislature] National People’s Congress has the right to declare that Hong Kong is in a state of emergency. Then, Beijing can issue an order to implement relevant national laws in Hong Kong,” it warned.

After Hong Kong reverted from British to Chinese rule in 1997, the city was guaranteed a high degree of autonomy with separate administrative, legislative, and judicial systems from mainland China. But the Hong Kong government can request Chinese authorities to step in to maintain “public order,” according to the Basic Law.

The WeChat post went on to explain that China’s Counter-Terrorism Law grants Chinese authorities the right to to punish any form of terrorism, while the People’s Armed Police Force Law grants the paramilitary the power to police turmoil within Chinese territory.

Beijing officials and Chinese state-run media have recently called the Hong Kong protests “budding terrorism,” while state media have recently published footage of the paramilitary’s armored vehicles going through the city of Shenzhen to gather for large-scale exercises.

The post also cited a quote from former Chinese paramount leader Deng Xiaoping, who once said that the PLA’s Hong Kong Garrison has a mission of “countering turmoil in Hong Kong.”

The PLA ended with an ominous message: it noted that according to the lunar calendar, Aug. 8 was the beginning of autumn. Locusts die in autumn due to the seasonal changes and a lack of food sources, it explained. Accompanying the long post was a photo of a locust, marked with the Chinese characters “poisonous Hongkongers,” to insinuate that Hong Kong protesters would disappear like locusts soon.

The eastern PLA also deleted the post after several hours. But many pro-Beijing social media accounts have reposted it before it was deleted.

U.S. President Donald Trump in a Twitter message on Aug. 13, also appeared to confirm China’s mobilization: “Our Intelligence has informed us that the Chinese Government is moving troops to the Border with Hong Kong. Everyone should be calm and safe!”

The U.S. State Department soon reacted with alarm. A spokesperson replied to The Epoch Times via email on Aug. 14: “The United States is deeply concerned by reports of Chinese paramilitary movement along the Hong Kong border…We condemn violence and urge all sides to exercise restraint.”

The United States also said it would “remain staunch in our support for freedom of expression and freedom of peaceful assembly in Hong Kong.”

U.S. lawmakers across the aisle also recently rebuked Beijing for its veiled threats at a Hong Kong crackdown.

“They even incited the Hong Kong residents to engage in confrontation with the [Hong Kong] government and the central government,” Hua said. “How anxious are they to instigate and see chaos.” Beijing has consistently pushed the narrative that foreign governments are behind the protests challenging Beijing’s authority.

Hua was referring to a Twitter post by U.S. House Speaker Nancy Pelosi (D-Calif.) on Aug. 12: “The people of Hong Kong are trying to preserve the promise of One Country – Two Systems. If we don’t speak out for human rights in China because of commercial interests, we lose all moral authority to speak out elsewhere,” referring to the framework under which Beijing promised that the city would preserve its autonomy.

Senate Majority Leader Mitch McConnell (R-Ky.) also voiced his support for Hongkongers on Twitter: “The people of Hong Kong are bravely standing up to the Chinese Communist Party as Beijing tries to encroach on their autonomy and freedom. Any violent crackdown would be completely unacceptable. As I have said on the Senate floor: The world is watching.”

On Aug. 14, the satellite office of China’s Foreign Ministry in Hong Kong published a commentary repeating Hua’s words, while claiming that the congress members’ tweets were evidence that the United States interferes in Hong Kong affairs.

The U.S. State Department has consistently rebuked China for claims of foreign interference in the protests, saying that the “ongoing demonstrations in Hong Kong reflect the sentiment of Hongkongers and their broad and legitimate concerns about the erosion of Hong Kong’s autonomy.”

U.S.-based China affairs commentator Tang Hao said in an Aug. 14 YouTube video that the troop movement to Shenzhen is an upgraded threat, increasing the possibility that it would indeed send troops to quell the protests.

Tang also analyzed that Trump’s recent tweet was meant to deliver a message to Beijing: the U.S. government is monitoring the situation in Hong Kong and the Chinese regime should not do whatever it pleases, he said.