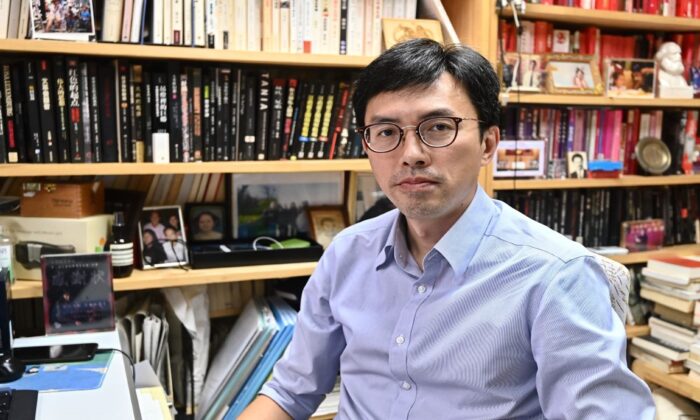 Avery Ng was interviewed by the Chinese edition of The Epoch Times in Hong Kong on May 25, 2022. (Song Bi-long/The Epoch Times)
Hongkongers' Story

What does one know about Avery Ng Man-yuen, apart from him being “the General” in the League of Social Democrats? He studied business in Australia and once mixed in commercial circles, where he was a consultant for a multinational company making US$127,437 a year. In order to help people lower down the social ladder and the elderly, he gave up a career of high pay and a generous business package to tread in the activist circles. Ng did not expect the “pothole” to go deeper and deeper but eventually found himself in jail. He was jailed before, but this time when he was released, Hong Kong was cordoned all over with “red lines.” To survive in this environment, maybe one needs to live like Ng—keep his spirit and be his true self despite being wedged in the cracks.

Irrelevant to The World

Ng, ex-chairman of the League of Social Democrats, was sentenced to imprisonment of twelve months and two weeks for two unauthorized assemblies on October 1 and 20, 2019. On April 30, 2022, he was released, after a sentence served, from Hei Ling Chau Correctional Institution. Posting on Facebook, Ng described the past year or so as a “vacation.”

“As soon as I disembarked from the ferry, the first thing I did was get a haircut.” “Great that I was released today, just in time to get a free tram ride thanks to the Keung To Day.” April 30 was the birthday of Keung To, the hottest pop singer in Hong Kong.

Ng could perhaps be described as “impossibly positive.” A year in jail is a period “neither long nor short,” but none of Ng’s spirit and smiles were eroded.

Compared to the ones behind bars, the ones outside may well suffer much more. Looking back, Ng and his family were mentally prepared for the one year of jail time, long before it happened.  Ng bantered: “I never felt down. It was just a year. Men in Taiwan and Korea have to get military training for one year. All I had to do was imagine I was there for the training.”

He was making light of the one year in jail: “It was not a big deal. Whether you can adjust really hinges on your mentality.” To him the toughest thing about being behind bars was, “you seem to be irrelevant to the world. Watching news and television, you were aware that no matter what happened outside and whatever ideas you might have, there was nothing you could do.” Another thing that saddened him was, time and again through television he watched the arrests of his friends. Some friends even went into exile.

To lessen the “pain,” Ng found a cure in books. He read over a hundred books during the year. “They covered many, many subjects. The majority were in English to be sure.” Probably most would think Ng only focused on books related to politics, but this could not be further from the truth. “To be honest, It was dull gazing at four walls. The time would drag on even more unbearably if you got yourself to read the heavy serious books.” Current affairs, politics and international relationship aside, what Ng favoured most was novels. Every time he went to jail he read George Orwell’s “1984,” a book about the cruelty and pervertedness of totalitarian rule.

The interview of Ng took place at the end of May, one month after his release. During the month Ng was “busy gaining weight.” Weighing 138 pounds, he had not fully recovered the lost weight, a slim man looking thinner now. While under detention, he kept doing regular daily exercises for health and “good sleep through the night so that the time passed more quickly.”

He lost 20 pounds and his weight dropped to 128. “My muscles were actually firmer as a result so it was okay.” To keep fit one exercises and keeps control over food intake. “In theory the food provided gives enough nutrition to prisoners but in reality… as to its taste, opinions differed.” He did not eat much.

He would send Facebook messages, “I will still be in jail, when you watch this video.” He pre-recorded messages to upload to social media to say happy birthday to fellow freedom fighters and activists such as, Tiffany Yuen, Joshua Wong, Eddie Chu and former legislator Auntie Mo (that is, Claudia Mo), who were also under custody. “The purpose was simply to highlight my presence.” He laughed.

Beneath the banter there was the anxiety for others: “I simply wanted to keep reminding the public that there are actually a lot of fellow fighters remanded, so please keep the support going.” Ng is perhaps a sensitive man with a warm heart. On the other hand he also tried, using social media as a platform, to bring awareness to topics for discussion in the society.

For people outside jail, the unknown world behind bars ignited anxiety and fear about the life and emotions of people in jail. What can they do about this? “I probably sound trite in saying—writing to them gives them encouragement, and help whenever they need help,” so that the ones behind bars know that a lot of people still care and support them. “That’s all I can think. Very little we can do, but it’s better than nothing.”

In Action Right After Jail for Truth To Be Heard

Out of jail, Ng did not “take a good break.” The next day was Labor day,  he went to petition at the Government Headquarters “valiantly” with Pikachu (the nickname of Hong Kong’s new Chief Executive John Lee) on his T-shirt front. He wrote on Facebook; “The first strike after the bars. Petitioned at the Government Headquarters for all workers.” Several days later he went to the Stanley Prison to greet Bull (former legislator, Tsang Kin-shing) who was just released from prison.

“No one would seriously think that my petition on Labor Day would bring any improvement to [their] policy.” “Even the press would not necessarily cover it.” However, precisely because less and less people spoke out, Ng chose to do a bit more and take one more step whenever he could. “It’s only going to get worse, if no one speaks out at this juncture.” Putting sensitive political issues aside, Ng still felt the society was in need of sensible and objective voices to bring truth into the open. “I just can’t let go, so speak out whenever I can.”

After his release,  Ng found Hong Kong had been turned upside down. Many fellow freedom fighters were still in jail and a large number of civic societies and mass media were wiped out. Ng had digested this bad news while behind the bars. “I knew the worst was yet to come, which did not jeopardize my state of mind.” Be that as it may,  strangely it felt familiar yet alien to Ng when the moment actually came.

A Road Of Thorns For The League

The League planned a march from the Family Planning Council to the vote counting centre on the Chief Executive Election Day. Chan Po-ying  said they did it to prevent a “dead silence” in Hong Kong’s civic society. “The League wants to encourage all the silently waiting Hongkongers, even if we may be the last one left to speak out!” Chan was called “Mrs Long Hair”. She married the founder and ex-legislator Leung Kwok-hung, who was known by his nickname “Long Hair.”

Since the introduction of the National Security Law, all the protests and demonstrations have literally disappeared. The League of Social Democrats was the one and only organisation voicing out now. When asked whether he worried about the future for the League, Ng, who was now in his 13th year with the body, said, “For sure there are worries, but we are not going to be consumed by anxiety.” In order to ultimately silence all the protests, a regime can employ numerous excuses to pick on an individual or organisation. “On the other hand, would shutting up bring you safety? You  never know.”

There are so many intangible red lines existing, even setting up a street booth is restricted in many ways. “We are trying our best to speak the truth—about Hong Kong’s social issues, political issues, and our thirst for freedom and democracy. We speak out humbly in whatever little space is allowed. “What other things that the League can do? Ng replied, “A tough question.”

“We know the space is getting smaller and smaller, and we can only wriggle in the narrow cracks.” Rather than living in anxiety and fear, Ng preferred to live in his true self. “Or there seems to be no purpose to be a human being.” Perhaps this is the only way to struggle for survival in Hong Kong  nowadays. The implicit sorrow defies description.