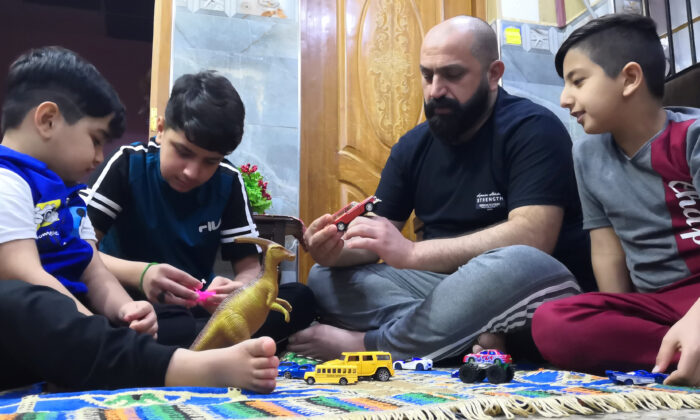 Local worker Muhammad Subeih Haider, who was laid off amid the spread of the coronavirus disease (COVID-19), by private British security firm operating in West Qurna 1 oilfield, developed by Exxon Mobil, plays with his children at his home in Basra, Iraq, May 29, 2020. Picture taken May 29, 2020. (Mohammed Aty/Reuters))
Middle East

BASRA, Iraq—Mohammed Haider, a security worker in Iraq’s southern oilfields, thought he was safe after signing a new one-year contract to guard oil facilities. Three days later, he was out of a job.

“I got laid off. They threw us out on the pavement,” the 38-year-old said, speaking as he protested outside the Basra Oil Company headquarters, the national partner for foreign companies.

Haider had been hired to drive vehicles for a British security firm around the giant West Qurna 1 oilfield that produces hundreds of thousands of barrels of crude each day—part of OPEC member Iraq’s principal source of wealth.

He now spends his days at home or searching in vain online for jobs that are hard to come by in a crisis-hit economy.

“I can’t even fall back on taxi-driving work. The curfew because of coronavirus means I’d get arrested for driving around illegally,” he said later at his home.

Haider is one of the thousands of workers in Iraq’s oil sector who were laid off this year after a fall in oil prices caused by the COVID-19 pandemic, and who struggle to find any other source of income.

Iraq in March asked international oil companies to cut their budgets by 30 percent because of plummeting oil prices. Energy companies in the south responded by cutting costs.

Subcontractors, including security, construction, and transport firms, let thousands of workers go, according to local authorities.

“Of about 80,000 Iraqis working in the oilfields, some 10,000 to 15,000 are now out of work,” said Mohammed Ibadi, a local government official in Basra province, where most of the southern fields are located.

Iraqi workers had been forced to take unpaid leave or had been laid off completely, mostly by subcontractors, he said.

The British security company that employed Haider declined to comment.

‘TD Take Half My Wages’

Ibadi’s office received dozens of complaints from workers who asked Iraqi authorities to sanction companies that don’t comply with contractual termination terms. The local authorities negotiated 50 percent and 25 percent salaries for four months for some 2,000 workers who had been laid off, he said.

“We particularly need to protect the jobs of the local population,” he said.

Iraq has pledged to cut nearly a million barrels of oil production per day (bpd) in line with OPEC cuts. Its exports stood at 3.2 million bpd in May. The cuts have slashed state revenue, of which it makes up more than 90 percent.

The government faces making cuts to public sector pay—a move that would further anger impatient Iraqis who staged protests in 2019 against alleged government corruption and lack of jobs.

Ibadi fears the economic and social crisis will worsen as the COVID-19 pandemic hits Iraq harder.

With most jobs in Basra linked to the energy industry, it is near impossible for workers like Haider to find an alternative source of income.

The father of three, who worked for five years as a driver for the British company, subcontracted by an American oil corporation, is ready to take on any job to provide for his family.

Haider fears he might no longer be able to cover school or medical costs.

“I wish the company would take me back, even for half my wages,” he said.