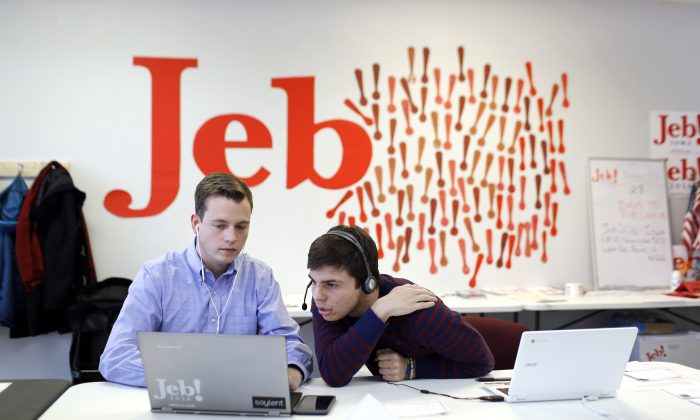 But these Republican presidential candidates are devoting significant time and resources to the state in a battle to beat expectations — and each other — in the Feb. 1 GOP caucuses. Each hopes a surprisingly strong showing in Iowa will give him a boost heading into the New Hampshire primary, where the political landscape is more favorable to more traditional candidates.

The expectations game for “establishment” candidates has added intrigue to the final sprint to Iowa’s lead-off caucuses. While the fight for first place has settled into a two-way race between conservative favorites Ted Cruz and Donald Trump, some of the biggest unknowns surround the candidates for whom a loss in Iowa could still be viewed as a win.

“January in the Iowa caucus is all about the establishment race,” said Doug Gross, an Iowa Republican strategist who has not backed a candidate in the 2016 contest.

While Iowa’s social and religious conservatives hold significant sway, 43 percent of GOP caucus-goers said they did not identify as evangelicals and 34 percent said they were either neutral or did not support the tea party, according to polls of participants in 2012.

Matt Strawn, a former chairman of the Iowa Republican Party, said that a candidate who can consolidate the sizeable swath of center-right voters “may not end up in the winner’s circle on caucus night, but they would certainly enter New Hampshire’s more favorable electorate with quite a head of steam.”

That’s enough of an incentive for Bush, Christie and Rubio to keep spending money in a state they’re all-but-certain to lose.

While Bush has struggled to connect in Iowa, as well as nationally, his campaign is banking on organizational prowess and frequent voter contacts to pull out a top five finish. The former Florida governor has 20 paid staffers in the state, including 10 deployed from campaign headquarters in Miami as part of a shake-up.

On a recent afternoon, about a dozen Bush staff and volunteers gathered in a brightly lit campaign office in a strip mall near Des Moines where they spent hours calling potential supporters, logging commitment levels to Bush in an online database and writing follow-up notes.

The campaign’s recent shake-up included a decision to withdraw TV spending in Iowa. However, Bush’s super PAC has spent more on the air here than any other political organization. Ads totaling about $10 million already have run, and another $2.6 million is planned by caucus day, according to advertising tracker Kantar Media’s CMAG.

Bush’s Right to Rise super PAC has two ads on the air in Iowa criticizing Rubio for skipping Senate duties in favor of campaigning, including a new spot out Thursday.

Of all the candidates competing for the center-right vote in Iowa, expectations for Rubio are the highest. He’s consistently ranked third or fourth in preference polls, though far behind Trump and Cruz, and he’s cast himself as a candidate who can straddle his party’s establishment and conservative wings.

The Florida senator has spent more time in Iowa than his more mainstream rivals but far less time than Cruz. His team has increased its staffing in recent weeks and now has four offices in the state. And Rubio’s campaign, a super PAC and a nonprofit group have together invested $7.4 million in television advertising, with another $5 million worth of commercials coming by Feb. 1.

But questions loom about Rubio’s organization. For months, operatives here whispered that the campaign low-balled salary offers for top jobs, hurting Rubio’s bid to hire experienced Iowa hands. After months without a state director, he settled for an operative from Arkansas, and also has a state senator working in a volunteer capacity.

The biggest question facing Rubio, however, is whether his attempts to compete with Cruz for the social conservative vote have turned off more centrist voters, potentially leaving the senator without a plurality of support from either wing of the party.

“They’re not confident they know who he is or that he knows who he is,” he said. “By attrition, they’re now looking at Christie.”

Indeed, in interviews with about 20 uncommitted voters attending Rubio events in Iowa this week, Christie was the candidate they most frequently said was also on their short list.

Peggy O’Neill, a 74-year-old retiree from Clarion, is among those now giving the New Jersey governor a closer look.

“He has executive branch experience and I do like that,” said O’Neill, adding that she would weigh Christie’s experience against Rubio’s tenure in the Senate and previously as speaker of the Florida House.

Christie’s campaign footprint in Iowa is far smaller than that of Bush and Rubio, and for months there was little expectation that he would be a factor in the caucus. But he’s now benefiting from a surge in national media coverage that’s accompanied his rise in New Hampshire, raising the prospect that he might be able to finish ahead of Bush in Iowa.

Christie’s campaign has so far opted out of advertising in Iowa, and his super PAC has spent only about $75,000 on paid media there through this week. But in a sign that his campaign may see a chance to play the spoiler for some of his rivals, aides say they plan to run an ad now on the air in New Hampshire in Iowa later this month.