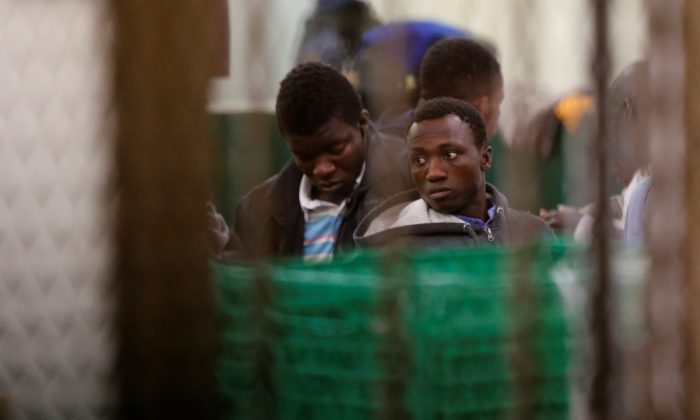 Migrants eat a meal at a refugee center for migrants who arrive from Spain in Bayonne, France, on Jan. 31, 2019. (Reuters/Regis Duvignau)
Europe

BAYONNE, France—In the Basque Country town of Bayonne, in the foothills of the Pyrenees, French police are struggling to stem a growing flow of migrants crossing the snow-capped mountains that straddle the border between France and Spain.

Spain became a major entry point for Africans fleeing war and poverty after a populist government took power in Italy early last year and largely shut down ports to migrants.

More than 58,000 migrants landed in Spain by boat in 2018, according to the International Organization for Migration, nearly triple the previous year and eclipsing for the first time the numbers passing through North Africa to Italy.

Many head north and cross the French frontier hidden in trucks, riding buses, or on foot, crossing a mountain range with its highest peak rising to 11,000 feet and with winter temperatures often falling below zero.

“My colleagues are professionals, but they become despondent when they run searches, take migrants back over the border, only for them to re-enter. It’s like emptying an ocean with a spoon,” said Patrice Peyruqueou, a police official in France’s southwestern Pyrenees-Atlantiques region.

The European Union has struggled to resolve tensions among member states over migration policy, even as overall numbers arriving from Africa and the Middle East have declined sharply.

With Spain a flashpoint, Bayonne, 25 miles north of the border, is grappling with a humanitarian situation that is stretching the town’s finances and pitting Mayor Jean-Rene Etchegaray against the local representative of the interior ministry.

In the New Year, Etchegaray asked the local prefect for funds to help finance the running of a reception center dubbed “La Pausa,” where up to 150 migrants at any one time can rest for three days, receiving food and donated clothes.

But the interior ministry’s then-local prefect, Gilbert Payet, refused to provide support for the center, arguing it helped encourage the movement of migrants across France.

Etchegaray was stunned. “It’s a question of humanity,” he told a local radio station.

By Regis Duvignau and Claude Canellas