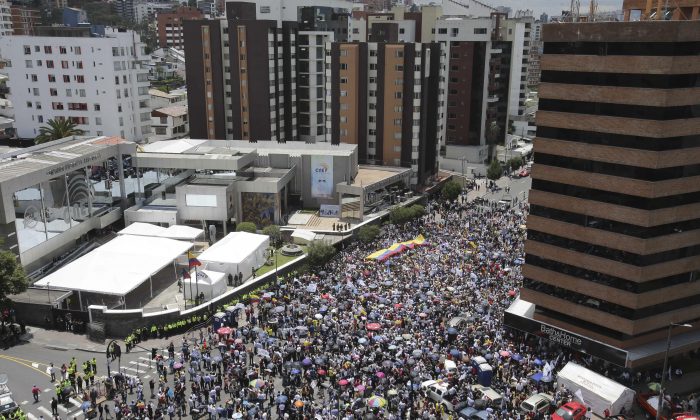 In Ecuador, America and Europe Neglect Their Economic Leverage Over China

Ecuador’s plan for free trade agreements with the United States, European Union, Russia, and China demonstrate that democracies are not utilizing their own large economies to protect democratic values.

On trade matters, Ecuador has in effect broadcast that it is not choosing sides in the developing new cold war between China and a U.S.-led coalition seeking to protect democracy and human rights globally. And apparently, that is no problem for the Biden administration, which has repeatedly stated that the United States is not asking other countries to choose sides. The European Union, the world’s other largest market by GDP, already has a trade deal with Ecuador and is even further from seeking to use its market power to encourage the closer integration of democracies, and thereby protect democratic values in Ecuador and the world.

So Ecuador is shrugging its shoulders and seeking trade deals with China and Russia over the coming four years, even as its president, Guillermo Lasso, has stated that the United States is the country’s priority alliance and trade partner.

On Oct. 7, Ecuador’s Production and International Trade Minister said that a U.S. deal was the priority in the Ecuadorian president’s attempt to double its foreign direct investment (FDI) to $1.8 billion annually. The minister, Julio José Prado, spoke to Reuters in an interview.

“A trade deal does not depend on what a minister or president thinks, but on where Ecuadorean companies need to be,” Prado told Reuters. “If that means having trade deals with China and the United States at the same time, well, we will do it.”

There is plenty of room for China’s trade, investment, smuggling, and bribery to influence or corrupt Ecuadorian politics. President Lasso’s planned increase in FDI is meant to offset a deep recession that afflicted the country due to the pandemic. Ecuador defaulted on its debts in 2020, and so it is desperate.

Lasso himself was recently identified in the Pandora Papers, which is approximately 12 million leaked files that includes financial information about many world leaders who hide wealth offshore. The president, a former banker and conservative who beat a left-wing candidate in April, “replaced a Panamanian foundation that made monthly payments to his close family members with a trust based in South Dakota in the US,” according to the BBC.

Had the leftist, economist Andrés Arauz, won the election, the turn toward Beijing would likely have been more pronounced. Rafael Correa, who oriented Ecuador from Washington to Beijing between 2007 and 2017, when he served as president, backed the candidacy of Arauz. Correa executed a series of loan-for-oil deals with Beijing and broke off relations with U.S. financial institutions, effectively putting the country under Beijing’s influence.

Just before leaving office, the Trump administration’s U.S. International Development Finance Corporation (DFC) attempted to reverse Ecuador’s fall into China’s orbit through a mid-January 2020 deal that envisaged the United States purchasing Ecuadorian oil and infrastructure assets so that Ecuador could pay off its debt to Beijing. As part of that deal, Ecuador agreed to forgo 5G purchases from Chinese companies. Now that Donald Trump is no longer in office, Ecuador may be testing the waters to see if it can again profit through increased trade and investment from Beijing.

The Biden administration should make clear that continued American economic largesse, and access to U.S. markets, is dependent upon Ecuador demonstrating, through its political and economic relations, that it sides with democratic countries, rather than with Beijing. Ecuador should stop seeking trade deals with China and Russia, for example, and improve its relations with democratic Taiwan.

Touch action is required by countries in Latin America, where China seeks to expand its illiberal influence through trade, investment, and likely the bribery of heads of state and their families.

In 1823, President James Monroe pronounced his famous doctrine meant to keep European colonial powers out of the Americas. Now, Russia and China have expanded their influence through Cuba, Nicaragua, and Venezuela, all of which are led by authoritarian communists, and all of which have failed spectacularly at bringing their citizens economic growth, human rights, and freedoms of speech and the press.

But it is every democracy’s responsibility to reorient trade away from an increasingly powerful and totalitarian China, and toward democracies and other friendly countries that will use the economic gains from trade responsibly.

The United States and Europe, as the world’s most economically powerful centers of democracy, must more assertively use their economic influence and purchasing power to wean the rest of the world from a dangerous economic dependence upon the world’s most dangerous authoritarian regime.