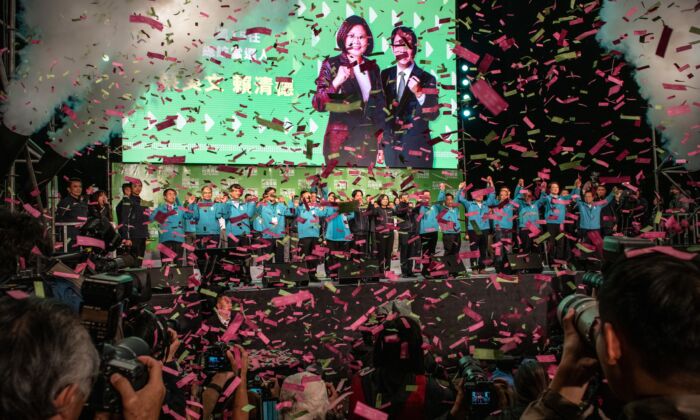 Confetti falls as Tsai Ing-Wen holds hands with Vice President-elect William Lai and Vice-President, Chen Chien-jen, as she celebrates after addressing supporters following her re-election as President of Taiwan in Taipei, Taiwan on January 11, 2020. (Carl Court/Getty Images)
By Nicole Hao

Meanwhile, officials stuck to the Chinese regime’s narrative that the self-ruled island is part of its territory.

On Jan. 11, Tsai won the election by a landslide with 8.17 million votes, or 57.1 percent of the total votes. The figure was also the highest number of votes a presidential candidate has won since the island held direct presidential elections in 1996. Her chief opponent, Han Kuo-yu from the Kuomintang (KMT), earned 5.52 million votes (38.6 percent), while third-party candidate James Soong won 608,590 (4.3 percent).

Voter turnout rate also reached a new high, with 14.46 million Taiwanese, or 74.9 percent of the electorate, casting their ballots.

Tsai, of the Democratic Progressive Party (DPP), has defended Taiwan’s sovereignty and repeatedly called out Beijing’s intimidation and influence campaigns on the island, angering the Chinese regime. Since she assumed office in May 2016, Beijing has consistently attacked her.

Han, on the other hand, ran on a platform of pursuing closer ties with mainland China.

“The election within the Taiwan region is largely controlled by external dark forces,” state-run media Xinhua said in its Jan. 11 report, spreading its usual narrative of foreign countries being the culprit behind incidents that challenge the Chinese regime.

Meanwhile, People’s Daily, the official mouthpiece of the Chinese Communist Party (CCP), analyzed on Jan. 12 that the reason why Han and KMT lost the election is because “there have been conflicts within the KMT since the beginning of the campaign, and the KMT doesn’t have a strong supporter from the outside.”

The article also claimed that U.S. and other Western forces “publicly interfered in Taiwan election… The United States pushed a series of policies supporting Taiwan…and indulged the DPP in fighting the mainland,” the report said.

“This is a dirty election without any impartiality,” People’s Daily said in an editorial published on Jan. 12.

The hawkish newspaper Global Times used harsh language to warn Tsai on Jan. 11: “If Tsai and the DPP government keep on leading Taiwan in the opposite direction, they will surely become historical sinners, who will be criticized by people on both sides of the strait and will receive retribution.”

Xinhua, which serves as the Chinese regime’s official news agency, published an article on the election results late on Jan. 11, first criticizing the performance of Tsai’s government in the past three years. “People’s livelihood are getting worse and worse, while democracy [in Taiwan] keeps going backwards… this prompted the deliberate use of all resources within the party, government, and military to campaign [for Tsai].”

The Xinhua article accused Tsai of spreading disinformation instead. “First, she crazily spent hundreds of billion of Taiwan dollars [1 TWD = 0.033 USD] to launch policies in an effort to buy voters’ support. Second, she hired an internet army to defame her competitors. Third, she enlarged the threat from the mainland… scaring people.”

In fact, in the lead-up to the January election, the Chinese regime twice sent its newest aircraft carrier to the Taiwan strait, a move denounced by Taipei as military intimidation. The regime has never ruled out using military force to take Taiwan.

And previously in 2018, media such as Foreign Policy magazine traced popular Facebook fan pages for Han—who was eventually elected to mayor of the southern Taiwanese city of Kaohsiung—to a Chinese cybergroup.

Since September 2019, Chinese state-run media and the KMT have claimed that Tsai’s government policies, such as offering pensions to farmers, were attempts to buy people’s support.

In fact, that policy was proposed long before the presidential race—in September 2018.

Despite Taiwanese voters favoring Tsai’s repudiation of Beijing’s “one country, two systems” proposal for annexing the island, officials stuck to their talking points.

Ma Xiaoguang, spokesman of the Taiwan Affairs Office of China’s State Council, told media on Jan. 11: “We would like to promote cross-strait relations under the common political basis of ‘92 Consensus’ and being ‘against Taiwan independence.’”

Under the “1992 Consensus,” Taipei and Beijing agreed that there is “one China,” but both sides can interpret what the “one China” is. In the mainland, the Chinese regime claims itself as the “one China” and Taiwan as one of its provinces. Meanwhile, Taiwan recognizes itself, officially the Republic of China, as the sole legitimate representative of China.

Tsai and the DPP do not accept the “92 Consensus,” saying that Taiwan is a sovereign nation and that the consensus is simply another codename for Beijing’s desire to unify Taiwan.