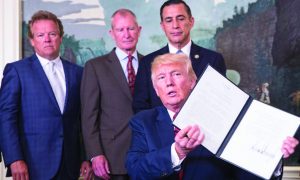 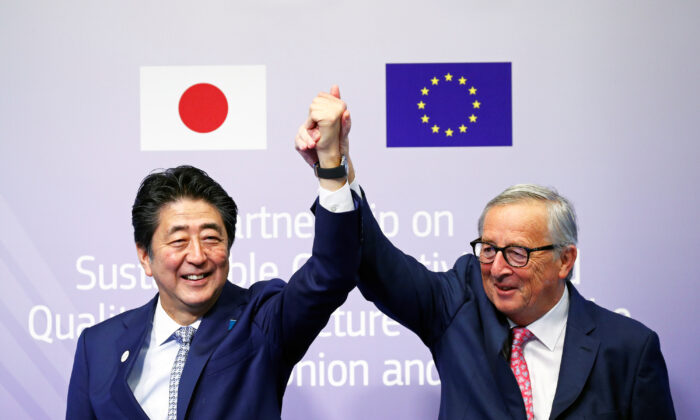 BRUSSELS–The European Union and Japan signed an infrastructure deal on Sept. 27 to coordinate transport, energy and digital projects linking Europe and Asia, seeking an alternative to Chinese largesse that has raised suspicion in Brussels and Tokyo.

The accord, signed by Japanese Prime Minister Shinzo Abe and European Commission President Jean-Claude Juncker, formalizes Japan’s involvement in a new EU-Asia “connectivity” plan that is set to be backed by a 60 billion euro ($65.48 billion) EU guarantee fund, development banks and private investors.

“Whether it be a single road or a single port, when the EU and Japan undertake something, we are able to build sustainable, rules-based connectivity from the Indo-Pacific to the Western Balkans and Africa,” Abe told an EU-Asia forum in Brussels.

Since 2013, China has launched construction projects across more than 60 countries, known as the One Belt, One Road (OBOR, also known as Belt and Road) initiative, seeking a network of land and sea links with Southeast Asia, Central Asia, the Middle East, Europe and Africa.

“The sea route that leads to the Mediterranean and the Atlantic must be open,” he added, referring to the need to prevent projects funded by Beijing and its vast foreign exchange reserves dominating transport routes.

Juncker also vowed to help build infrastructure “without mountains of debt” or a reliance “on a single country.”

That was a veiled reference to Chinese-financed projects that have sent debts in some central Asian and Balkan countries soaring after they embarked on building bridges, roads and tunnels they could ill-afford.

EU officials said they are concerned about what they see as a Chinese investment model which lends to countries for projects they may not need, making them reliant on China once under way. Poor countries across Asia and Africa have seized on the attractive Chinese loans.

A Chinese-funded highway to link Montenegro’s Adriatic coast to landlocked neighbor Serbia has so indebted Montenegro that the International Monetary Fund has told the country it cannot afford to finish the project.

Although not all European and Japanese money will be spent in Asia, the Commission’s strategy makes spending on infrastructure links with Asia official EU policy involving the EU’s common budget.

In their 10-point accord, the EU and Japan promised to pay “utmost attention” to countries’ “fiscal capacity and debt-sustainability.”