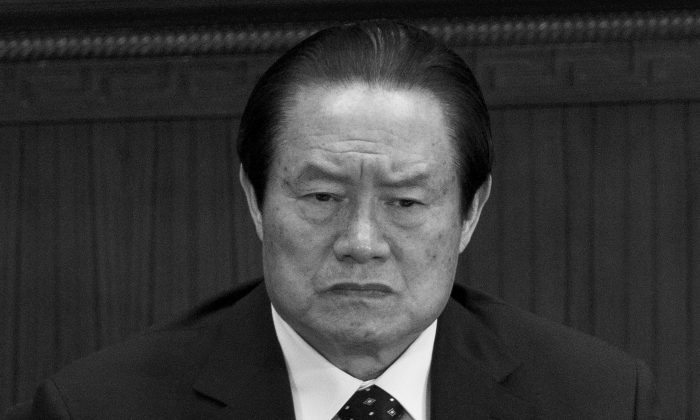 In this March 11, 2012, file photo, Zhou Yongkang, then the Chinese regime’s domestic security czar, attends the National People’s Congress in Beijing. Hu Ping argues that not long after this, Zhou set in motion the journalist’s investigation that resulted in the exposure of offshore accounts held by top Chinese leaders who are opposed to Zhou.(AP Photo/Andy Wong, File)
Opinion

On Jan. 21 the International Consortium of Investigative Journalists published an article based on confidential documents showing close relatives of some top Chinese leaders had secret assets at offshore financial centers. The timing was striking.

The report came out at the moment Chinese Communist Party (CCP) head Xi Jinping publicly declared that “a blacksmith must be physically strong to forge iron,” “zero tolerance will be shown toward corruption,” and “down goes Master Kong.” (Master Kong is the nickname for the Chinese regime’s former domestic security tsar, Zhou Yongkang.)

This article targeting officials from the lowest to the highest ranks was a powerful counterattack against the ongoing anti-corruption campaign, with the faction headed by Zhou Yongkang waging political war in a life-and-death struggle.

The political novel “Tiannu” provides a helpful example of why the Communist Party often keeps its secrets. The novel alludes to Beijing mayor Chen Xitong, who would be taken down by Jiang Zemin for corruption.

A character in the novel, a “palace guard” for Chen who commits all sorts of crimes, says, “It won’t be easy to harm my father [Chen Xitong]. If somebody were to push him too hard, he would leak a few things that could potentially shake heaven and earth! So, does his superior dare not to protect him? If not, everyone would go down together.”

However, at the end, Chen Xitong falls without leaking anything that could have moved heaven and earth. Shanghai mayor Chen Liangyu fell in a similar fashion when Hu Jintao took him down. So, too, did former Chongqing Party head Bo Xilai. At the end, the only person who successfully pulled his superior down with him was Bo Xilai’s police chief, Wang Lijun.

Why didn’t Chen Xitong, Chen Liangyu, and Bo Xilai resort to the tactic of dragging down their political enemies with them?

On the one hand, maybe they were familiar with the dirty secrets of their political enemies, but they simply didn’t have any concrete evidence.

Or maybe they had concrete evidence, but they simply didn’t have the venue or the appropriate time to expose such information.

On the other hand, there is another explanation.

If someone came to them with both a carrot and a stick, they could see a potential way out. They might be promised an easy life in jail, or be offered a medical parole after only two years in jail, or their children and wife would not be implicated, or only part of their dirty money would be confiscated.

After falling, if you fight back, you could possibly incur even worse punishment. If you push it too far, you could end up paying with your life or hurting your family. So, if you cherish your life and you do not want to bring any harm to your children, you could give up any chance of fighting back.

Chen Liangyu was rumored to have received favorable treatment in jail. Chen Xitong was released on medical parole and lived comfortably in a villa for the rest of his life. Bo Xilai, who had dared to defend himself in court but did not attack his enemy, could have been protecting his son Bo Guagua.

In contrast, the situation with Zhou Yongkang is completely different. Bo Xilai was given life imprisonment. Wouldn’t that mean Zhou Yongkang would be sentenced to death? His son Zhou Bin has also been locked up in jail. So, too, have many of Zhou’s subordinates.

Zhou Yongkang has been pushed into a deep abyss. Since Zhou could not sink lower, why shouldn’t he try something, even it is only a futile gimmick?

According to a Deutsche Welle article on the leak of the offshore banking information, in 2012 an anonymous person sent the information to the Consortium of Investigative Journalists.

Because of the enormous volume of information, the Consortium had invited journalists from all over the world to go through the materials together, including journalists from Ming Pao in Hong Kong.

A newspaper based in Hong Kong, Ming Pao had been known for its independent reporting. However, the recent replacement of a longstanding chief editor and the subsequent repercussions for the entire editing department have reminded us that perhaps Ming Pao has been infiltrated by the CCP.

Deutsche Welle also reported that in the summer of 2013, reporters from around the world, including some from Beijing, got together in Hong Kong to meet and review these highly sensitive materials. The meeting lasted for six months, during which time one of the Chinese media outlets opted to withdraw from it.

This meeting reviewed some of the most sensitive materials that would be quite damaging to some of the top Chinese leaders, including Xi Jinping, Hu Jintao, and Wen Jiabao. Which Chinese media outlet from Beijing participated in this meeting? A reasonable guess would be one that had close ties with the faction headed by Zhou Yongkang, Jiang Zemin, and Zeng Qinghong.

Another thing was quite odd. On Jan. 21, the day that the International Consortium of Investigative Journalists made public their findings, the Chinese government immediately began censorship of anything relating to this news report.

That’s not the weird part. On this very same day, two-thirds of China’s Internet went offline. Chinese authorities initially said an attack from overseas caused a widespread Internet outage. However, a posting on Weibo, a popular social-media platform in China, stated that the agency responsible for the Internet had accidently paralyzed China’s Internet.

The state-run Global Times published an article with the title “The Mysterious Attack on China’s Internet Points to the Company that Provides Software for Overcoming Internet Censorship.” The article stated the name of the company is Dynamic Internet Technology and explained the company provides software like Freegate, which allow users to jump over Internet censorship.

Epoch Times, Voice of America, and Radio Free Asia are some censored websites that Chinese Internet users can still access if they use the free software provided by the company.

This article indirectly encouraged readers to find out more about Dynamic Internet Technology and to download the free software Freegate, so they could have access to censored online information. In turn, more people could read the materials made public by the Consortium, thereby strengthening the attack against Xi Jinping, Hu Jintao, and Wen Jiabao.

The following scenario suggests itself. In February 2012, Wang Lijun fled to the United States Consulate General in Chengdu, which brought about the case against Bo Xilai. In March or April 2012, Bo Xilai was stripped of his Party positions.

Zhou Yongkang then felt deeply threatened and secretly sent someone to help with the investigation of the offshore accounts. The Consortium received an anonymously sent hard drive packed with information.

In December 2013, Zhou Yongkang was arrested. Now Zeng Qinghong and Jiang Zemin are involved—they are Zhou’s close allies. And they are worried. How can they prepare themselves for the future in which they will be targeted?

During Jiang Zemin and Hu Jintao’s times in power, a certain balance of power was maintained. The arrests of Zhou Yongkang and Bo Xilai are for political crimes that threatened to end that balance—they had sought to usurp power. The move against Zhou Yongkang now also threatens to end this game of balancing power.

In today’s communism, corruption is so widespread that opposing corruption is the political game used to get rid of people who are not following the Party line, whether one removes people going from the bottom to the top, or from the top to the bottom.

But corruption has a stubborn constituency within the Party. If only one person at the top is corrupt, and everyone else must have clean hands, others may not agree. If a leader opposes corruption, others may feel threatened and join together to defend themselves, putting in power someone who makes them feel safe.

After the Tiananmen Square massacre on June 4, 1989, the upper level within the Communist Party used terror to balance political power. Everyone was treated as responsible for killing the students and no one would say anything in opposition or express a different viewpoint. In the absence of that balance of terror, the power struggle at the top level of the Party has been heated.

At this moment of contempt for human rights, the refusal to be governed by law, and opposition to democracy, winning the fight for political power has become the focus.

Translated by Frank Fang and Fenny Li. Written in English by Stephen Gregory.