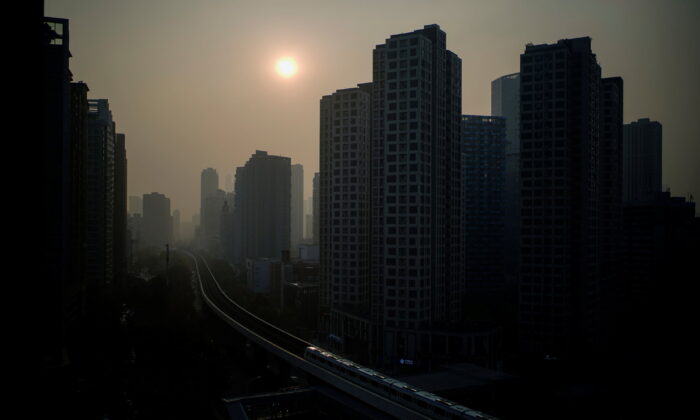 Buildings are seen at sunset, almost a year after the global outbreak of COVID-19 in Wuhan, Hubei province, China, on Dec. 12, 2020. (Aly Song/Reuters)
China

BEIJING—Detection in the Chinese city of Wuhan of a bacteria that caused cholera in a student and was separately found in samples from softshell turtles at a food market has struck a sensitive nerve with ordinary Chinese people, with some relating it to COVID-19.

The food market where samples from softshell turtles tested positive of the pathogen capable of causing cholera has been disinfected, local authorities said late on Thursday.

While no human cholera case was found among people who came in contact with the softshell turtles, the specific store selling them was ordered to shut down for three days.

Authorities said that the vibrio cholerae O139 strain for the student’s infection, announced on Monday, and the contaminated samples are unrelated.

Officials are also tracking unspecified products of the same batch as the softshell turtles that have been shipped elsewhere, said the disease control authority in Wuhan’s Hongshan district.

Despite a lack of solid signs of a cholera outbreak, netizens worried about another disease outbreak still made this issue among the top trending topics on China’s Twitter-like microblog Weibo on Friday, with 200 million reads.

The earliest reported COVID-19 infections in late 2019 were initially linked to a local market in Wuhan that also sold seafood and fish products. The origin of the SARS-CoV-2 virus that causes COVID-19 remains a mystery and a major source of tension between China and the United States.

“Take the lesson of COVID, and hurry up in source tracing to secure evidence!!!” wrote a weibo user.

Reports of cholera, an acute watery diarrhoea disease potentially fatal if left without prompt treatment and usually linked to contaminated food or water, are rare in mainland China, with five cases in 2021 and 11 in 2020 but no deaths.

The actual number of cases may be much higher as the Chinese regime routinely suppresses or alters information.

“The detection of Vibrio cholerae O139 … does again remind us that wet markets, while culturally and economically important in Asia, have associated with them various public health risks,” said Andrew Greenhill, a microbiology professor at Federation University Australia.

At this point there is no major cause for concern while ongoing surveillance is important, Greenhill said, adding that O139 has been detected in various other countries and that large cholera outbreaks are unlikely in locations with safe drinking water and adequate sanitation.

Wuhan, with a population of more than 12 million, said on Monday the case of cholera in a local university student did not cause further infections.

Wuhan is yet to disclose sources of the bacteria for the student and the samples, or details on source tracing progress.