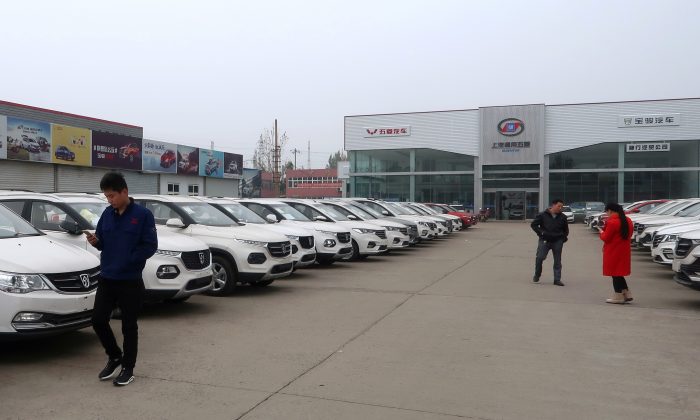 Dealers and customers are seen next to cars at a SAIC-GM-Wuling Baojun dealership in Pingdingshan, Henan Province, China on Nov. 15, 2018. (Yilei Sun/Reuters)
China Business & Economy

PINGDINGSHAN, China—When Cao Jun, 40, an engineer from the central Chinese city of Pingdingshan, takes his old, grey MG 3 car to be serviced, he always steals a few moments to pop into the Nissan and Honda dealerships next door.

But the Civic and Sylphy sedans in the showrooms are just eye candy. Cao wants to upgrade his car, but he’s facing a steep loan repayment on his flat, medical bills for his wife and a tough local economy in his once-prosperous coal town.

Cao is far from alone. China’s car market, the world’s largest, is on the brink of its first sales contraction in almost three decades, according to industry data, a signal of wider economic strains that are rattling the country’s leaders in Beijing.

The slowdown—aggravated by a protracted trade war with the United States—is being most sharply felt in smaller, provincial cities like Pingdingshan, the engines of growth for Chinese consumption of cars and an array of consumer goods.

China has long hoped to spur consumption in these provincial cities as a way of diversifying an economy long reliant on manufacturing. But a slump in consumption spending is already being seen in things like cinema ticket sales, online shopping and smartphones purchases.

Part of the reason is that provincial city consumers like Cao are being squeezed tight.

Speaking to Reuters as he drove his MG through the outskirts of the city, Cao said capacity cuts at his main employer—the state-owned coal and chemicals conglomerate Pingmei Shenma Group—meant his income this year had dropped sharply.

He has taken up driving part-time for the ride-hailing giant Didi Chuxing to make ends meet.

“All these things put together, they slowly start to turn the screw on your life,” he said. “I want to drive a better car, but my situation won’t allow it.

He added that the family had also cut back on luxuries like long-distance travel and fancy restaurants.

Cutbacks on car purchases by Cao and others like him in China’s smaller cities, are hitting local car dealers and global automotive makers from General Motors Co to Volkswagen AG.

“These were the cities leading China’s auto sales growth in the past few years.”

Consumers and car dealers in Pingdingshan all painted a similar picture. The city, 93 miles south of the provincial capital Zhengzhou, went through boom years from the 1990s, buoyed by a flourishing coal industry.

But amid a nationwide shift to cut reliance on polluting industries and a sharp shift away from coal, the city has suffered. Pingmei Shenma Group, one of the area’s biggest employers, has cut back coal capacity and seen profits fall—creating a ripple effect through the local economy.

The group, like many state-owned firms around the country, reaches far into the community: it operates hospitals and schools, and provides pensions, subsidized housing for workers, water, heating and power.

During the growth years, a family car became a symbol of status and success in the city, driving growth faster than the national average. That has now changed.

“The situation here is really bad. We sold 40 percent fewer cars in October than September,” said Zheng Shuke, a manager at an SAIC-VW dealership near a busy freeway outside Pingdingshan. “This is very unusual in the 6 years I’ve been an auto dealer.”

“I think the biggest reason is that fewer and fewer people have enough money to buy cars,” he added. “Our economy used to rely on natural resources. However now due to capacity cuts, fewer people can get the iron rice bowl,” a reference to state firms cutting cradle-to-grave welfare support that he said had underpinned spending confidence.

Reuters spoke with 20 consumers, car dealers like Zheng, auto finance executives and government officials, mostly in and around Pingdingshan, who said the car market in the city had seen a sharp slump this year as consumers tightened their belts.

Henan Province is one of China’s biggest by auto sales with over a million passenger car units sold this year. But growth has stalled sharply, according to data from local consultancy Daas-Auto.

Henan auto sales dropped 18 percent in October after a 25 percent drop the month before, outstripping a fall in sales nationwide of almost 12 percent last month, the fourth straight month of declines.

In response, car dealers in Pingdingshan have cut prices to lure buyers, according to dealers and adverts circulated on local social media.

“We’re offering discounts, but these just don’t seem to be working,” said Zheng, the car dealer.

Across town at a ten-year-old dealership for GM-linked Wuling-Baojun cars, manager Jiang Long said customers had dwindled this year, especially since June.

In front of the store 100 new cars waited to be sold, but customers were in short supply when Reuters visited. Jiang said sales were down 40-60 percent versus last year.

“This is just part of our inventory, we have more in other places,” said Jiang. “We make many calls to old customers to attract them to buy new cars, but they just don’t seem enthusiastic this year.”

The top-selling cars in the area are mostly no-frills, practical cars, industry data show, a trend mirrored in other provincial cities and rural areas.

Outside the city in nearby Lushan county another Wuling-Baojun dealer, Si Pengyuan, said local families used to take pride in having the best car, but had pulled back—cutting his sales in half versus 2017.

“Rural people like to compete; when a family buys a car their neighbors will come and buy one too,” he said. “But this year people just aren’t coming. Families who have had cars for years aren’t replacing them.”

Pingdingshan’s downturn has spooked business people and the local government, which says that young people have less buying power or are moving away entirely.

The slowing economy has sapped consumer confidence even as access to credit has dwindled amid a crackdown on risky lending and high levels of debt. This credit had previously spurred car purchases, some dealers said.

Zhang Yinlong, a local manager at an auto finance firm, told Reuters at a large second-hand car market near the city that it was a “bad time” to be in the industry. “I don’t see many customers are buying car these months,” he said.

Ruan Pengfei, 33, who owns a children’s clothes shop, is one feeling the pinch. A self-confessed car nut with two kids, he bought a new Buick Excelle GT for 110,000 yuan less than a year ago and loves to drive it to work.

But with sales at his shop slumping, he’s now reluctantly trying to sell the car for 85,000 yuan via an online platform and reverting back to his older Honda Fit.

He said he’s struggling to sell the Buick—with few people willing to buy even at a discount.

“My bottom price for this car is 80,000 yuan, but people who came all complained about the price,” he said.