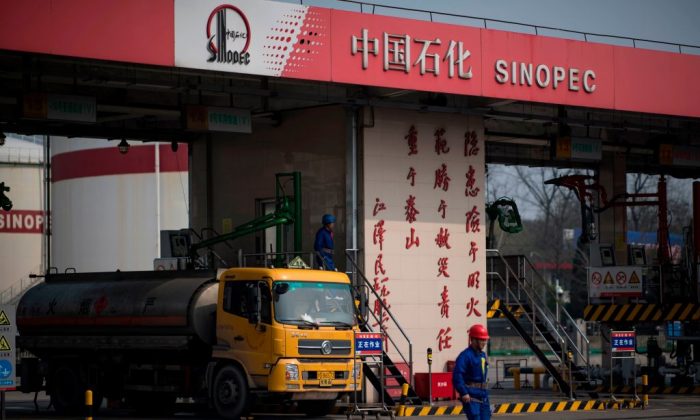 A man works at a gas station of Sinopec in Shanghai on March 22, 2018. (Johannes Eisele/AFP/Getty Images)
China Business & Economy

Workers at a state-supported petrochemical project in northeastern China have been deprived of their wages for months.

Laborers were subsequently hired by contractors to do the construction work for Hengli Group projects at Changxing Island in the Bohai Sea, off the coast of Dalian City in northeastern China.

Hengli Group, founded in 1994, has a broad portfolio of businesses, including petrochemicals, chemical fibers, textiles, finance, hotels, and real estate.

According to its official website, Hengli announced its plan to build Hengli Petrochemical Industrial Park at Changxing Island in 2010. It was a chemical refinery integration project with an annual capacity of 20 million tons.

It also planned a facility to produce ethylene, a chemical needed to make plastics, with an annual capacity of 1.5 million tons. In April 2018, the company announced its total investments on the island would be more than 150 billion yuan (about $21.9 billion).

China’s cabinet-like State Council, in a document about revitalizing the economy in northeastern China issued in August 2014, noted Hengli and its projects at Changxing Island as prime examples of how private companies can help boost the local economy.

China’s northeastern region, more specifically the provinces of Heilongjiang, Jilin, and Liaoning, is known as the country’s rustbelt region, being the heart of China’s heavy industry since the era of former Chinese Communist Party leader Mao Zedong. The region, plagued by corruption, economic inefficiency, an aging population, and exhaustion of its minerals, often posts the weakest economic growth rates compared to other regions in China.

Multiple workers on the Changxing Island projects recently spoke to the Chinese-language Epoch Times in phone interviews about their unpaid wages.

Mr. Wen from Heilongjiang Province said the Sinopec Fifth Construction Corporation has not paid him in more than three months.

Wen expressed doubts that a state-supported project would be short on money, and said he has sought legal assistance to retrieve his wages.

Another worker, Wang Zhiru, stated that he worked from April to September last year, but he has only been paid for two months’ worth of wages. Wang claimed that Sinopec Fifth owes about 80 workers including him.

Wang said the company had promised to pay back all salaries owed by Oct. 10 last year, but has failed to keep its promise.

Mr. Yang said he was part of the 765-member engineering team hired by China Petroleum First Construction Corporation. Yang was paid for the month of September last year, but the company still owes him three months of wages, totaling more than 400,000 yuan ($58,528).

Yang added that he was told by an official from China Petroleum First that the company had wired the owed wages to its subcontractor, a man identified as Mr. Hu—who initially hired Yang and the others.

When reached by The Epoch Times, Mr. Hu explained that he did not take the wages—and that he was also a victim.

Hu explained that he had struck up a contract with China Petroleum First—for an undisclosed amount—to help it build the projects, including hiring the workers. But because the projects were more complicated than he initially anticipated, the monetary value of the contract could not cover all the costs of construction. As a result, Hu said he had to pay an additional 700,000 yuan ($102,457) out of his own pocket for the projects. He added that China Petroleum refused to help him with the extra expenses, so he did not have enough money to pay the workers he hired.

Mr. Wang, an official with Sinopec Fifth, spoke to The Epoch Times. He pointed out that more than 70 companies were involved with the Hengli projects, including about 40 state-run companies. Wang stated that “every single company has the problem of not being able to pay its workers their salaries.”

Wang did not explain if this was because Hengli Group was not paying its contractors, or if Hengli was in some kind of financial trouble.