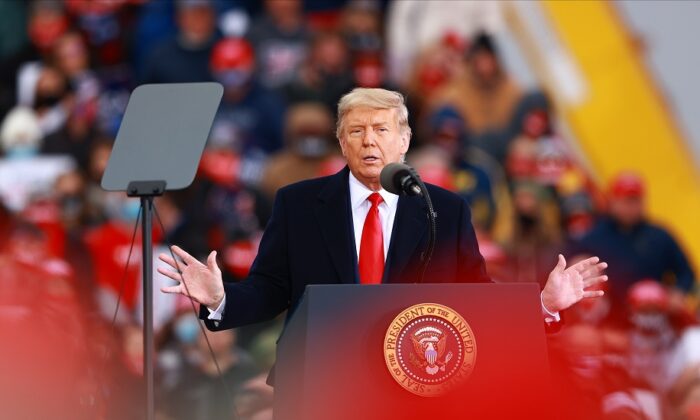 In Championing the Goodness of America, Trump Defines the Choice in This Election

Etienne de La Boétie, who graced this planet from 1520 to 1563, may have died young, but he made his mark, mostly because he was best friends with Michel de Montaigne.

It was Montaigne who helped assure the literary and political immortality of his friend’s most important work, an essay titled “Discours de la servitude volontaire” (“Discourse on Voluntary Servitude”).

La Boétie’s curious work has been an arrow in the quiver of anarchists and libertarians, as well as classical liberals, for centuries. It is an impassioned attack on tyranny, longer, perhaps, on denunciation than prudence but nevertheless a tonic reveille.

Among other things, La Boétie points out that even those who are duly elected can be tyrants, a fact that was pressed home upon me from a recent visit to the state of Michigan, whose governor, Gretchen Whitmer, is the very model of the modern major mandarin.

Whitmer has issued hundreds and hundreds of executive orders that impinge on the quotidian freedoms of the people she was elected to serve (how ironic that sounds: they also serve who only play the scold).

Whitmer was recently upbraided by the Michigan Supreme Court for exceeding her authority.

Her response was to transfer that authority to the state public health establishment, which set about enforcing her edicts about mask-wearing, “social” distancing, communal gatherings, quivering in place, and kindred impositions on liberty.

“Voluntary servitude”: isn’t that where we find ourselves now? This is no “social contract,” wherein we implicitly pledge allegiance to a regime in exchange for an escape from a sanguinary “state of nature” and entrance to a realm of law and order.

On the contrary, we find ourselves more and more subject to the extraordinary whims of those—and they are legion—who would be our masters, for our own good, we are told, but we can’t help noticing it’s also very much for their good, or at least their profit.

The depressing thing about voluntary servitude is the extent to which people actively conspire in forging their own manacles. To some large if indeterminate extent, many seem to crave the servitude, which can make it both difficult to discern and onerous to repeal.

What La Boétie says about ancient tyrants applies to many modern aspirants as well. They “show themselves in public as seldom as possible” he notes, “in order to set up a doubt in the minds of the rabble as to whether they were not in some way more than man, and thereby to encourage people to use their imagination for those things which they cannot judge by sight.”

I thought about that as I contemplated the extreme economy practiced by Joe Biden and Kamala Harris when it comes to public appearances.

“Oh, but people in Kamala’s circle have been diagnosed with The Virus. That exempts her from mingling with the rabble, er, the voters.”

Donald Trump and several people in his immediate circle contracted the CCP virus as well. How long was he out of action?

Biden’s most memorable nonresponse to a question in recent days (if we exclude his refusal to say whether he would pack the Supreme Court if he were elected) is his “I have no response” to a reporter’s question about the ongoing revelations about his son Hunter and his excellent adventures in influence peddling and self-enrichment.

Trump, by contrast, is not shy about showing himself in public. This weekend, he presided over a major rally in Michigan. (Rally? Rally? Can one hold rallies in Whitmer’s Michigan? No, so the president was careful to call his rally a “peaceful protest” out of consideration for Whitmer’s sensibilities.)

The theme of the event (surely “event” is sufficiently neutral) was “Supporting the American Way of Life.”

That’s provocative, isn’t it? All of our teachers, the media, and the entire woke publicity apparatus would have us inject the phrase with a yeast of irony and contempt, for who can take “the American Way of Life” seriously anymore?

Trump, for one, and also the thousands of people who show up to what once again are becoming nonstop rallies across the country.

The president began by noting that one of the “most vital issues” of the 2020 race is “the radical left’s plan to erase American history, purge American values, and destroy the American way of life.”

Trump is right: they mean business (or to speak more accurately, they mean to make business impossible).

As usual, the president spoke off the cuff. His rallies are like the river Meander. They digress and turn and double back. But they do make a point, or in this case, two points, one negative, the other positive.

The negative point concerned the nature of the internal threats that America faces circa 2020.

This race isn’t a typical contest between conservatives and liberals.

It is an existential battle between those who affirm the rudiments of the American dispensation—a dispensation that emphasizes individual liberty, limited government, and the separation of powers—and those who hate that dispensation and want to destroy it.

The president is right:

“The modern left does not use reason or persuasion to advance their cause. They use intimidation, coercion and control, and worse. They demand absolute allegiance or else.”

That’s where “cancel culture” comes in. It is, as Trump said, “one of the most sinister weapons of the extreme left.” Its goal is to “cancel our entire heritage.” Hence, the aroma of totalitarian intransigence that is part of its modus operandi. Acquiescence is not enough.

At a moment when “silence is violence,” active, enthusiastic boosterism is the minimum requirement for ideological absolution.

“These are not,” the president noted, “the tactics of a respectable political movement. This is the behavior of fascists. … The point of cancel culture is not to convince you, it’s to humiliate you, and break you, and control you.”

This is true. But the question is whether the president is also right that “the American people will never submit, we will never apologize, and we will not be controlled, and never be broken.”

That, at the end of the day, is what this election is about.

Donald Trump has a keener sense of the culture war—the essentially Marxist assault on the institutions of American life—than any president I can think of. He understands the nature and gravity of the assault, and he isn’t afraid to describe it forthrightly.

He is able to do this because, in addition to grasping the negative, he also accentuates the positive.

He knows, as he said in Michigan this last weekend, that “America is the most magnificent, most virtuous nation that has ever existed.”

That isn’t just hustings hyperbole. It is the truth.

It does not, of course, mean that America is perfect, that it has somehow been exempt from the weaknesses, perversions, and evils that have blighted mankind throughout history.

It does mean that those human, all too human, failures have been offset by extraordinary accomplishments. “We’ve liberated millions from tyranny,” the president noted, “rescued countless millions all around the world from poverty, and built the most exceptional Republic in human history.”

Yes, there are those who dispute this: the 1619ers, the partisans of Antifa and Black Lives Matter, the people who look at America and see primarily an opportunity to extend their agenda of dependency.

That’s the choice we face in this election.

It’s between the people who want to compass the American past and present in a holocaust of racialist grievance-mongering, building hecatombs of repudiation in which Washington, Jefferson, and Lincoln are indiscriminately canceled, and, on the other side, those who affirm America not as utopia but as “the last best hope of earth.”