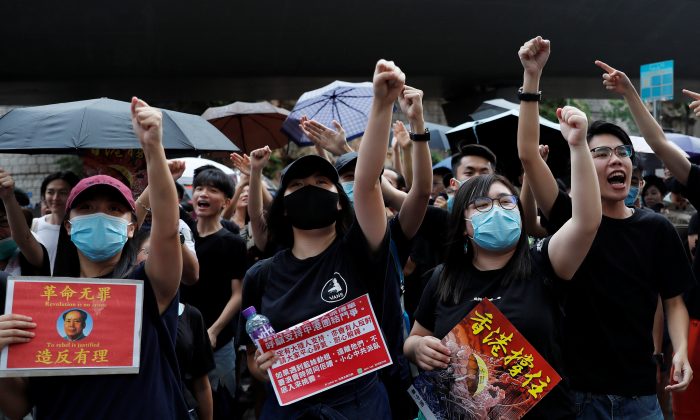 In Challenge to Beijing, Hong Kong Activists Attempt to Take Fight to Mainland

HONG KONG—Hong Kong’s faceless protest movement is embarking on a bold new strategy that poses a direct challenge to the city’s political masters in Beijing: Activists want to export their “revolution” to mainland China.

China’s censors have gone into overdrive in the past month, blocking news of Hong Kong’s biggest and most violent protests in decades from filtering through to the mainland, where stability is the Communist Party’s overwhelming priority.

Recent images of police firing rubber bullets and tear gas near the city’s financial district as well as chaotic scenes of demonstrators storming the legislature were beamed live to the world—except in mainland China, where they were blocked from many social media sites.

So activists, angry and frustrated over a now-suspended extradition bill that would allow criminal suspects to be sent to China for trial, want to take their fight to areas of Hong Kong popular with mainland Chinese.

“We’re trying to export our revolution,” said Bonnie Leung of Civil Human Rights Front, the organizer of recent protests that the group says have seen millions take to the streets.

“If they (tourists from mainland) watch what Hong Kong people are doing, they make copies and bring back to China,” she added. “We’ll all have democracy in Hong Kong and in China.”

On July 13, protesters will rally in Sheung Shui, a town near the Chinese border that attracts mainland shoppers. In previous years, the area has been a battleground for Hong Kong people angry over the flood of Chinese day-trippers.

Another protest on July 14 will take place in the suburban district of Sha Tin, which has also been the site of clashes between Hong Kong residents and mainland visitors.

The protesters are expected to use similar tactics to those of a rally at a tourist area on Sunday, where they handed out pamphlets printed in the simplified Chinese characters used on the mainland. They also shouted slogans in Mandarin, China’s most common dialect.

“They hope they can make an influence, which the Chinese government is obviously very afraid of,” said a 22-year-old student from Hong Kong who runs an Instagram page called AntiELAB that aims to raise awareness about the protests and political situation in Hong Kong. Instagram is blocked in mainland China.

“It’s evolving every day and that’s how it should be,” said the Britain-based student, referring to the movement where, he says, “everyone is their own leader.”

Under the terms of the handover from Britain in 1997, Hong Kong was allowed to retain extensive freedoms not enjoyed on the mainland under a “one country, two systems” formula, including an independent judiciary and right to protest.

But for many Hong Kong residents, the extradition bill is the latest step in a relentless march toward mainland control.

The protesters’ tactics have evolved significantly since the “Umbrella” movement demonstrations in late 2014, which paralyzed parts of the former British colony for 79 days but did not win concessions from Beijing on greater democracy.

That failure, coupled with prosecutions of at least 100 protesters, mostly youths, had until last month discouraged many young people from going back to the streets.

Activists are mobilizing supporters through a host of internet forums and messaging app groups, taking out ads in international newspapers and petitioning diplomats to raise awareness among world leaders. All of it is meant to complicate Beijing’s diplomatic agenda.

Denise Ho, a Hong Kong singer and activist banned in mainland China, urged international action in an address on Monday to the U.N. Human Rights Council in Geneva. Beijing’s delegation twice interrupted her speech with points of order.

“I think this is really something that we haven’t seen before. It is a new age of protest,” said Labour Party lawmaker Fernando Cheung, who along with others is on a hunger strike over the extradition bill.

“The mainland population has to come to accept Hong Kong as having a different system. Without that understanding and consent, the conflict between the two populations would come about eventually and then the two systems cannot be protected.”

People rallied in cities across the world in June, including London, New York, Toronto and Melbourne, coinciding with demonstrations in the Chinese-ruled city that organizers said drew around a million people.

The demonstrators are also erecting “Lennon Walls” across Hong Kong, including in rural and pro-Beijing districts, with supporters pasting colorful protest memos along pedestrian underpasses, footbridges, tunnels and near temples.

One message on many walls reads: “Fight Together.”

Many of the students were babies or toddlers when Britain returned Hong Kong to China. But they have adopted the colonial flag as a symbol of protest and even draped it over the speaker’s lectern in the legislature when they stormed it hours after city leaders toasted the 22nd anniversary of the handover.

China has condemned the protests in Hong Kong as an “undisguised challenge” to the formula under which the city is ruled, although some observers say the protesters still have some way to go before they cross Chinese leader Xi Jinping’s “red line” of undermining Chinese sovereignty.

“As long as they don’t strive for independence of Hong Kong with a large number of people, and push mainlanders to revolt against the Chinese Communist Party, I believe the red line is still quite far away,” said Ming Sing, an associate professor at the Hong Kong University of Science and Technology.