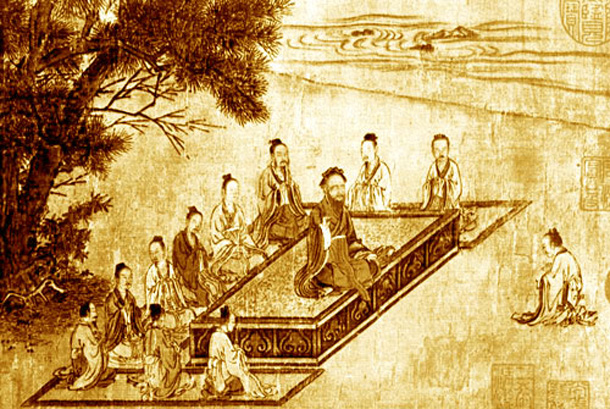 In Being an Upright Leader, Don’t Micromanage or Be Overly Judgmental

The principles of good leadership apply at all levels of social hierarchy, whether it relates to running a country, operating a business, keeping a household in order, or maintaining a positive marriage. Among the key issues is how leaders treat and regard the people they’re responsible for.

There’s a story in the “Hagakure,” one of the core Japanese texts of Bushido, written by Yamamoto Tsunetomo in 1716, which describes a discussion on itemizing payments to find possible misuse of funds. In the story, a man counters the concept by stating, “This is not as advantageous as you think.”

The man cites a saying from the Confucian text, “Kung Tzu Chia Yu,” which states “Fish avoid streams with clear water; a man too judicious amasses no followers.”

He then elaborates on the concept, stating, “Fish are able to survive and thrive by hiding under weeds and in the shadows of objects in the water. Not paying heed to the odd shortcoming enables the lower class to live with peace of mind. This is also pertinent to issues of conduct.”

The ideas of not micromanaging, not making sweeping programs that punish both the guilty and innocent, and also not being overly judgmental when it comes to minor flaws; these are all key elements of good leadership.

A good leader is attentive to the hardships and needs of those under him, and also understands that nobody is perfect—he is strict with himself, but lenient with others.

Many of today’s totalitarian systems of government invert this principle, including with fascism, communism, and socialism. They preach instead that the people should conform to the leader absolutely. A leader should be strict with his subordinates yet lenient with himself.

Under communism, in particular, Vladimir Lenin preached the idea of “partisanship,” where no middle ground was tolerated on any issue. Under Karl Marx’s concept of “dialectical materialism,” the middle ground was eliminated from every social issue.

Communism preaches that any minor deviance from its goals or ideals should be treated with the harshest response.

In the same way, many of today’s movements rooted in communist ideology demand absolute tolerance of all forms of moral decadence but call for zero tolerance of any opposing views.

They’ve eliminated the value of tolerance, ironically under the banner of tolerance—and in doing so, they’ve also destroyed one of the foundations of social harmony.

With communism, this destruction of social harmony is intentional. It believes social struggle will help society evolve, and so attempts to sharpen antagonisms between people at all levels of society. And by using its tool of “agitation propaganda,” it intentionally stirs up hatred and anger in its followers, so they can be used like a club wielded by party leaders.

The principle of not being overly harsh or tolerant of the odd shortcoming also closely aligns with harmony in our social relationships, friendships, and family ties.

In a household, if a father is too harsh or nit-picking, his children will dislike him; just as they would a father who sets no standards or boundaries.

In a marriage, if a man gives no space to his wife, and hovers over her every move, she’ll come to resent him—just as she would if he went to the other extreme and ignored her completely.

Through this, mistrust could breed reason to mistrust; and being overly critical could cause a person to cement their flaws. According to the principles of Taiji (ying-yang), where there is a void, it will be filled; and where there is a push, there is a pull.

In ancient China, government typically didn’t stretch below the county level, with the county magistrate. Below that, families and fraternal organizations were largely given the freedom to administer their own affairs, and government would assist society in being self-sufficient.

According to “T’ai Kung’s Six Secret Teachings,” an ancient Chinese book on governance and military affairs, a leader “who excels at administering a state governs the people as parents govern their beloved children or as an older brother acts towards his beloved younger brother.”

It states that a sage leader focuses on making people tranquil, while a worthy leader focuses on helping people achieve good and upright lives. A stupid person, meanwhile, is incapable of becoming upright, and so instead focuses on struggling with others. In this same light, it states that “When the ruler labors, punishments become numerous. When punishments are numerous, the people are troubled … No one, of whatever position, can be settled in this life, and generations on end have no rest.”

To bring tranquil lives to people, the book states that “Heaven has its constant forms,” and similarly that “the people have their normal lives.” Through helping people become self-sufficient, in accord with the natural form of a person’s normal life, much is possible. “If you share life with All under Heaven, then All under Heaven will be tranquil.”