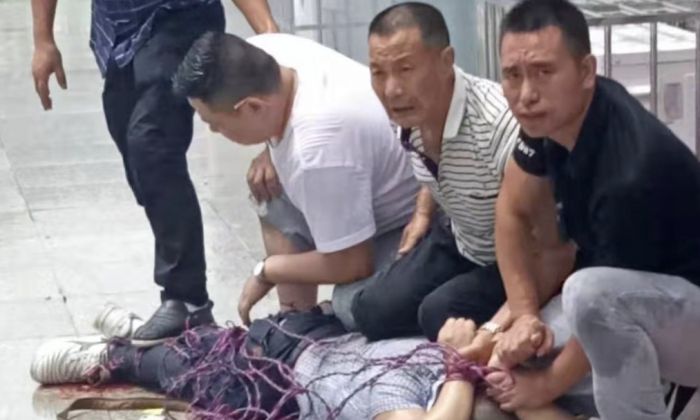 Xu Weigang was controlled by village officials after he made the blasts on July 26, 2019. (Provided to The Epoch Times by interviewee)
Social Issues

An alleged revenge bomb attack to take down a village official in southwestern China has recently captured netizens’ attention.

Two bomb blasts on July 26 inside a residential building in Zhongke Village, located in Mianyang City, Sichuan Province has injured 20, according to local authorities.

The alleged perpetrator, Xu Weigang, has been detained by police after he injured himself in the second blast.

Villagers have told The Epoch Times that Xu executed the attack to avenge his late wife, who was allegedly raped by a local village official.

Before noon on July 26, two explosions occurred in Zhongke Village, located in Shima Town, Xianyou District of Mianyang City. An official statement from district police said of the 20 people injured, 5 were in serious condition, the police would investigate more.

Chinese state-run media such as Beijing News did not report on the details, but said several local officials were injured and sent to the hospital immediately.

The Chinese-language Epoch Times interviewed local villagers on July 28. They explained the details on the condition of anonymity. Below, they are described as A, B, and C.

A said that the blasts happened in the first floor of a newly built apartment building within an affordable housing residential complex called Science City.

That was also where the local “Demolition Office” was situated. All cities in China have an agency that oversees razing operations.

“The demolition office was holding a township meeting for Chinese Communist Party [CCP] members when the blasts happened,” A said. “The assistant mayor of Shima town attended the meeting and was seriously injured.”

A said three people have died in the blast, including a fellow villager whose house had been demolished.

“There were two blasts. Xu Weigang threw the first bomb into the meeting room from outside. Zhao Xinghui, the village Party secretary, was running out of the room. Xu tried to catch him but fell down and triggered the second bomb. It blasted his own legs and his bottom,” B told the Chinese-language Epoch Times. Both Xu and Zhao survived the blast.

“Xu wanted to take revenge on Zhao for his wife,” C told the Chinese-language Epoch Times.

C has a close relationship with Xu’s family. He shared a copy of a testimony written by Zhao’s wife, Yang Juhua, before she died of breast cancer last year: “Xu told me before that Zhao had raped his wife.”

Yang was the government cashier of the Zhongke village government, a staff directly working under Zhao.

“Zhao is very evil. He occupied and sold land in the village, then bribed Party officials in the town hall. He became the village tyrant,” Yang wrote in her testimony.

Yang prepared a report to record what Zhao did, which was shared by a villager to the Chinese-language Epoch Times. In the report, Yang explained how Zhao asked her to falsify accounting records in order to assist him in embezzling money.

In China, all land belongs to the government. People who “buy” the land are in fact buying usage rights. In recent years, almost all local governments earn money by selling land usage rights to real estate developers. People’s homes are often demolished in the process.

Zhao also used the money he obtained to bribe officials in the town government and curry favor with them.

The villagers said more than ten others have petitioned the town government and district government about Zhao’s corruption since 2014, but to no avail.

Zhang Koukou, a military veteran from Shaanxi Province, was sentenced to death and executed on July 17 for murdering a local official out of revenge.

Zhang’s neighbor, Wang Xiaojun, was mayor of the township, while several of Wang’s family members were local Party officials.

In 1996, Wang, his father, and his two younger brothers killed Zhang’s mother during a dispute about their land border. Zhang, then a 13-year-old boy, witnessed it firsthand. Wang’s family arranged the youngest son, who was a teenager and would thus get leniency in court, to take full responsibility for the murders. But three years later, the youngest brother was released from prison after his elder brothers bribed local officials.