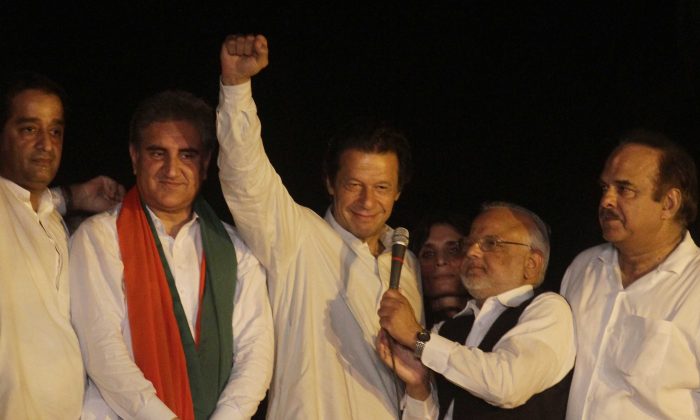 Pakistan's cricketer-turned-politician Imran Khan, centre, gestures during an address to his supporters in Lahore, Pakistan, Wednesday, Aug. 13, 2014. Roads leading to the parliament in Islamabad are being blocked in run up to announced protests by Khan and anti-government cleric Tahir-ul-Qadri. Both men want the government to step down and new elections to be held. (AP Photo/K.M. Chaudary)
India

Imran Khan Shot Dead? Was Politician and Former Cricket Player Killed? Appears to be a Hoax

Imran Khan was shot dead, according to rumors being circulated on popular mobile app WhatsApp.

But the rumors appear to be unfounded.

Khan, a former cricket player who became a politician by forming his own political party, Tehreek-e-Insaf in 1996, is reportedly still alive.

The Business Standard said that the rumors are a hoax and that Khan is scheduled to converge on Islamabad on Thursday along with fiery cleric Tahir ul-Qadri in an attempt to topple Prime Minister Nawaz Sharif.

It says that a Lahore court stopped Khan, the Pakistan Tehreek-i-Insaf chairman, and Qadri, the Pakistan Awami Tahreek, from holding the protest march and sit-in in “an unconstitutional way”–but that won’t prevent the march from happening.

“Our march is within the ambit of the constitution of Pakistan. Therefore, it on the respected judge to interpret about the unconstitutional protest march,” Tehreek-e-Insaf representative Ahmed Awais told reporters.

Khan responded to the verdict: “Our march is constitutional. The government’s act to put containers to stop us from going to Islamabad is unconstitutional,” he said.

India Today reported that the rumors of Khan’s death were spread on WhatsApp but loudly disproved by Twitter users.