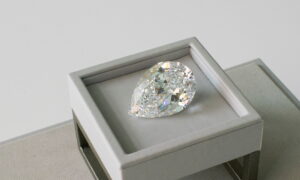 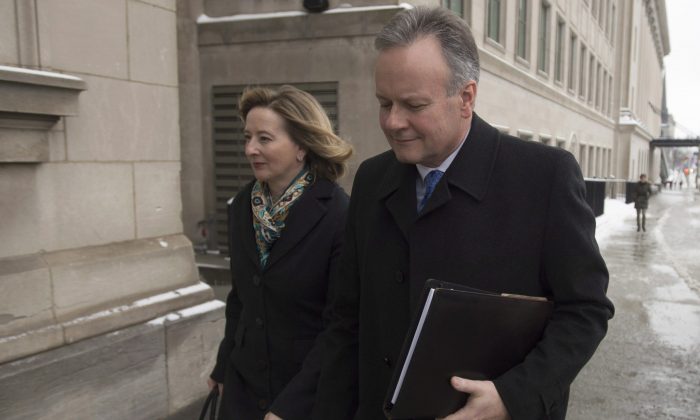 Bank of Canada Governor Stephen Poloz and Senior Deputy Governor Carolyn Wilkins arrive for a press conference in Ottawa on Jan. 18, 2017. The central bank announced that it would hold its key interest rate at 0.5 percent. (The Canadian Press/Adrian Wyld)
Business

OTTAWA—The Bank of Canada held its overnight rate target unchanged at 0.50 percent on Wednesday, Jan. 18 in the context of a largely unchanged economic outlook. The economy is projected to return to full capacity around mid-2018 mainly due to a boost from the federal government’s infrastructure program, which has yet to make an economic impact.

Of course, the big change since the BoC last published its quarterly projections is the U.S. election.  “Most importantly, what we have is heightened uncertainty,” said Bank of Canada Governor Stephen Poloz in his press conference referring to the Trump administration’s fiscal and, especially, trade policies.

In its latest Monetary Policy Report (MPR), the Bank factored in a cut in U.S. personal and corporate income taxes, which boosts U.S. gross domestic product (GDP) almost 0.5 percent by the end of 2018 to 2.3 percent.

However, the Bank judged it difficult to pin down a reasonable base-case assumption on trade policies. “We cannot capture these in our projections because they are simply unknown at this point,” Poloz said. Potential protectionist trade policy would have “material consequences for Canadian investment and exports,” according to the MPR.

“International trade is a positive sum game, not a zero sum game,” Poloz said about the presumption economists carry. “By trading, you generate more income on both sides of the exchange. That’s what trade does.”

Most importantly what we have is heightened uncertainty.
— Stephen Poloz, Governor, Bank of Canada

And conversely, “Pulling back trade is a negative sum game,” Poloz said. Incomes are reduced on both side of the border, he added.

The Bank said that while U.S. tax cuts are good for Canadian exports and business confidence, the flip side is that Canadian businesses become relatively less competitive than their U.S. counterparts. Thus, the anticipated U.S. tax cuts, on their own, don’t move the needle for the Canadian economy.

After a difficult start to 2016, the Canadian economy rebounded very strongly in the third quarter and is now on a path to grow by 2.1 percent in 2017 and 2018—essentially unchanged from October.

The Bank noted the rise in bond yields as markets priced in higher U.S. debt and inflation from expansionary fiscal policy and said it needed to incorporate some of the impending U.S. fiscal measures to avoid a disconnect in its projections.

“It [higher bond yields] is at odds with Canada’s macroeconomic situation, where there is material excess capacity, unlike the U.S. economy,” Poloz said, adding that “A rate cut remains on the table.”

A lot hinges on domestic infrastructure spending in Canada without further clarity on U.S. fiscal and trade policy.

The Canadian economy is getting mixed messages from its labour market. On one hand, job creation picked up in December and had a welcomed increase in full-time jobs. However, hourly wages for permanent workers only went up 1.5 percent, which is noticeably lower from the 3.1 percent pace at the start of the year. The Bank needs to see an increase in total hours worked and labour force participation to eat up the slack.

“While employment growth has remained firm, indicators still point to significant slack in the labour market,” according to the BoC press release.

Canada’s unemployment rate stands at 6.9 percent, but Senior Deputy Governor Carolyn Wilkins said it’s about 7.5 percent according to the Bank’s labour market indicators. Unlike the U.S. Federal Reserve, the BoC doesn’t provide an estimate of the unemployment rate when the economy is at full capacity.

Stage Set for Canada’s Economy to Strengthen in 2017

The bright spot is the service sector. The Bank of Canada said that the service sector has been growing at nearly 2 percent since late 2014, which, it says, “can account for all the growth in real GDP.” The services sector accounts for 40 percent of total business investment and the Bank’s latest Business Outlook Survey (BOS) indicated that the intention to invest in machinery and equipment is still widespread among service sector firms.

The BoC also sees signs of a bottoming-out in the energy sector and that the worst of the oil price shock is in the rear-view mirror. The uptick in rig count points to firmer investment in the oil and gas sector.

The engine of job creation is small- and medium-sized enterprises (SMEs) and a recent study from Business Development Canada (BDC) pointed to significant optimism. Seventy percent of entrepreneurs expected increased revenue in 2017—up from 45 percent last year.

But it seems that for every positive about the labour market, there’s a negative. The latest data on Canadian firm counts showed a 7 percent drop in the third quarter of 2016 from the second quarter.

Inflation has been lower since October and total consumer price index (CPI) inflation sits at 1.2 percent. One of the Bank’s new core inflation measures “CPI-common,” which tracks common price changes in the basket of goods, sits at 1.3 percent. This reflects the ongoing weakness in the Canadian economy, including the labour market. In October, the BoC actively discussed a rate cut, and not much has changed in January.

“There’s just enough lift coming from infrastructure spending and the end of the downturn in the resource sector to close the output gap in before the end of its 2018 forecast horizon,” said CIBC Chief Economist Avery Shenfeld in a note. Shenfield said the Bank of Canada doesn’t want to cut rates further if it can avoid it so as to not encourage more household borrowing.