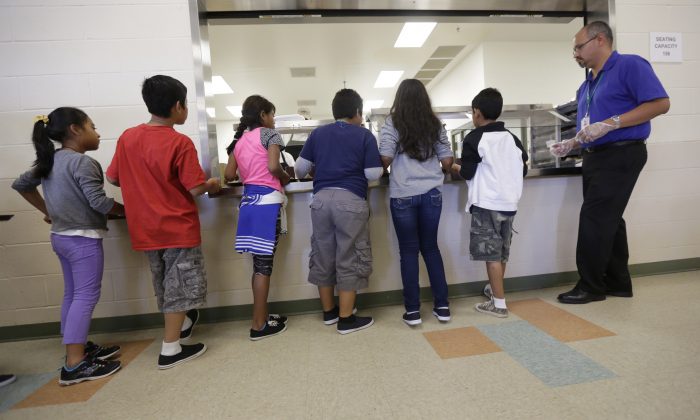 Detained immigrant children line up in the cafeteria at the Karnes County Residential Center, a temporary home for immigrant women and children detained at the border in Karnes City, Texas, on Sept. 10, 2014. (AP Photo/Eric Gay)
Opinion

Immigration Reform and the Promise of Civil Society

On the heels of an electoral drubbing, the president and Republican leaders of the new Congress remain at odds over immigration. The Republican meme of “securing the border” is beginning to skip like a scratched record. But the president’s “phone and pen” isn’t even on the constitutional playlist. We need a new song, a hit single to refresh the debate.

The argument over the U.S./Mexican border is stale. I grew up within sight of the border, and used to throw the old San Diego Union over white picket fences early in the morning, saying “buenos días” to the daily line of illegal immigrants being smuggled through our neighborhood. We who live here understand the importance of a sensible, legal process. But we also understand the difference between being here illegally, and being a criminal. They are manifestly not the same thing.

It wasn’t until I met a wonderful lady from Malaysia who would become my wife—after getting her a fiancée visa—that I grasped the real problem. And it was not at the border, and it had nothing to do with border security.

Imagine you are in the supermarket. You fill your cart and head to the front to check out. The first thing you look for is the shortest line. But everyone else is too; you do not really expect one line to be shorter than the rest. So you look at the carts of the last person in each line. The one with the fewest things will be the line you choose.

You are fifth in line; the guy in front of you only has two things in his cart. You watch, though as the clerk hand-types the UPC code from each product.

“That’s strange,” you think. “Why isn’t she just scanning the label?”

If you were to ask, she would say that her procedures require she “enters the UPC code for each product.” She takes that to mean manually, so checking out that customer takes forever.

But she finally finishes with that customer. As the guy next in line comes up, it is time for her to take a break and someone comes to relieve her. And he believes the procedures require him to call that customer’s bank to verify that his check will clear. He’s on hold with the bank, so …

You look up at the ceiling and sigh … The lines are all now twice as long as when you queued up.

The guy’s check is accepted and he is on his way. The next guy steps up, and before you know it there is a heated argument over what he can and cannot buy with his food stamps.

“For Pete’s sake, can we just get to this guy in front of me who only has two things?”

But the good news is something I learned as a paperboy. The vast majority of those here illegally are not criminals. Here illegally? Certainly. Criminals? Not by a long shot.

But my wife and I will also argue vociferously that we cannot solve the problem of illegal immigration by making a sham of legal immigration, and a fool of people like us who have followed the law. We can fix it, though, if we understand the real problem.

We have an immigration system built by and for political society—meaning government, its bureaucracies, and their intramural budget battles. A bureaucracy without a backlog has a bulls-eye on its budget—there are vultures with backlogs circling overhead waiting to pick at the fiscal carcass.

What we need is an immigration system built by and for civil society—meaning organizations of commonly interested individuals and groups seeking to address a need. While it might seem an odd analogy, the credit union is a perfect example of civil society working together in a member-owned nonprofit to address a common need.

Let’s use agriculture and the California Central Valley as an example. They depend heavily on immigrant labor. This is not because Americans will not do this work. It is because when our economy is healthy American citizens usually have other choices. Central Valley summer days are rarely below 100 degrees and the bank office is comfortably air-conditioned. Given the choice between picking strawberries and being an entry-level teller—well, which would you choose? So immigrants seek to come here to fill these jobs.

The conservative record keeps skipping on this scratch: “They should wait in line like everyone else!” Makes sense—if the line is moving. But it’s not.

And it isn’t moving because that is great for political society and their budget battles. But what if the Central Valley growers created a nonprofit cooperative under federal charter? The charter would specify a strict regulatory framework and the government would audit the cooperative regularly. But the cooperative—owned and operated by the growers—would have the authority to receive, process, and approve applications for immigrant work permits. The incentives for inefficiency that are built in to political society do not exist in civil society. Indeed, the growers would have every incentive to make the process as efficient as possible.

Immigration reform simply has to start with a clear idea of exactly what the government should be doing here. And it does not include administering the application process for immigrant work permits. That process should be managed by civil society. The proper role of the government is to create the charter for this and then audit the process and enforce the law.

John H. Horst holds a Master of Divinity from Bethel University. He is currently an information security engineer and trainer. He resides in San Diego, Calif., with his wife and two sons. He is the author of “The Secret to Winning the Hearts and Minds of the Next Conservative Generation.” More information at communityconservatives.com.