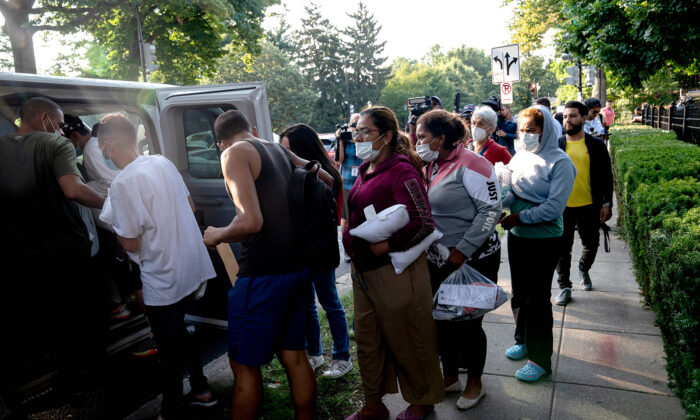 Illegal immigrants from Venezuela, who boarded a bus in Texas, wait to be transported to a local church by volunteers after being dropped off outside the residence of Vice President Kamala Harris, at the Naval Observatory in Washington, D.C., on Sept. 15, 2022. (Stefani Reynolds/AFP via Getty Images)
Viewpoints

The saying “the chickens have come home to roost” seems to apply to the immigration policies of the Biden administration, sanctuary cities and states.

Gov. Greg Abbott (R-Texas) and Gov. Doug Ducey (R-Ariz.) have been sending hundreds of people who have illegally crossed the border into their states to Chicago, New York, Washington, D.C., and Delaware. Gov. Ron DeSantis (R-Fla.) sent 50 migrants to the uber-liberal town of Martha’s Vineyard, Massachusetts. Gov. Charlie Baker (R-Mass.) promptly ordered the National Guard to send them to Joint Base Cape Cod. That should preserve property values in a town where wealthy residents, including former President Barack Obama, own homes.

The saying about roosting chickens refers to the unpleasant effects of actions someone has taken. Having declared their cities and states safe havens for migrants, Democratic mayors and governors are now loudly complaining they don’t have the room or resources to care for them. They don’t mind burdening states with Republican governors for the cost, housing, health risks (few appear to have been tested for COVID-19) and other challenges, but instead are taking a “not in my backyard” position when forced to deal with the U.S. government’s failure to control the border.

Illegal immigration has ebbed and flowed under previous administrations, but has reached new and unsustainable levels under the current one.

Busing migrants to these liberal bastions is a clever political move, which even some on the left have acknowledged. The latest occurred when two busloads of them were dropped off outside the Washington, D.C., residence of Vice President Kamala Harris. Fox News is one of the few media outlets to consistently cover the border crisis, including human and human traffickers and the smuggling of fentanyl into the country, a drug that has become the number one cause of death among 18 to 45 year olds. That other media have largely ignored or downplayed the immigration crisis is journalistic malpractice.

Biden administration officials, including Secretary of Homeland Security Alejandro Mayorkas and Vice President Harris, have claimed the border is closed. Video shows that is not true. To paraphrase another familiar saying: “are you going to believe them, or your lying eyes”?

It is amusing to listen to the squealing of those politicians who self-righteously claimed to offer open arms to all migrants but then turn on them, as though they were a vast migration of Republicans.

Some of these politicians have quoted the Emma Lazarus poem engraved on the Statue of Liberty about sending us “your tired, your poor, your huddled masses yearning to breathe free.” They now have flipped, preferring a version of the Little Richard song “Keep A-knockin’, but you can’t come in.”

Do our immigration laws mean nothing? Don’t our leaders take oaths to uphold the laws of the United States and protect and defend the Constitution? Those laws were passed by Republican and Democratic members of Congress and signed by presidents of both parties. President Biden is violating his oath of office, as is his secretary of Homeland Security, when they refuse to enforce them.

There are checkpoints where people fleeing their countries for humanitarian reasons can be legally processed while their claims are validated. No nation can maintain its character and existence if it does not control its border.

Illegal immigration has ebbed and flowed under previous administrations, but has reached new and unsustainable levels under the current one.

Why have past administrations, and now this one, allowing uncontrolled immigration, along with a flow of deadly drugs? Why is so much of the media ignoring it? If Republicans win a congressional majority in the November election, they must hold the administration accountable, even to the point of impeachment. To do otherwise would be chicken-hearted and invite even more bad policies home to roost.