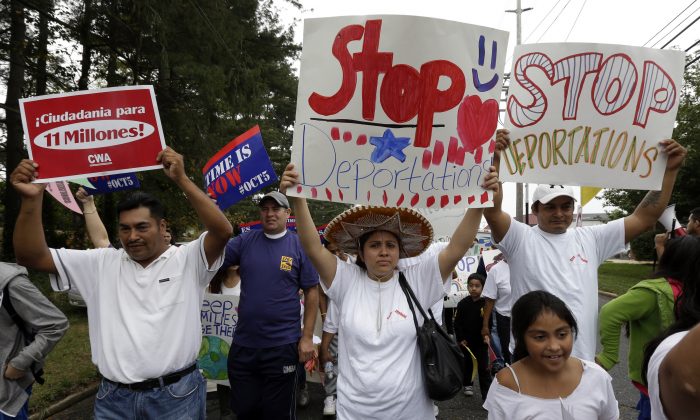 Time for Plan B, say demonstrators
By Mary Silver

ATLANTA—More than a thousand people marched in support of immigration reform in Atlanta Oct. 5. They were marking the “National Day for Dignity and Respect,” which urges Congress to pass comprehensive reform.

Efforts to reform America’s troubled immigration system had received bipartisan support, but the Syrian crisis, government shutdown, and soon, the debt ceiling have pushed the issue aside.

Immigration activists are calling for all 11 million undocumented American immigrants to have a path to citizenship. They also want the Obama administration to stop deporting people. With an estimated 1,000 people deported each day, the current administration has broken previous deportation records.

In Georgia, demonstrators chanted “Not one more” deportation, and carried banners calling for the controversial Plan B, with the president’s face pictured on the B.

If Congress fails to pass bipartisan immigration reform this year then President Barack Obama could sign an executive order to extend the DREAM Act to all 11 million undocumented people.

Deferred Action for Childhood Arrivals (“DACA”) grants temporary legal residence to certain people under 30 who came to the United States as children, have clean records, have been here a certain length of time, and who apply and pay a fee. These individuals are protected from deportation. Plan B would bypass Congress and include more people in this group.

The White House dismisses Plan B, but California’s governor won’t wait for Washington. He has already signed a series of bills on the topic.

In Los Angeles, a “March of the Stars” kicked off Saturday shortly after California’s Gov. Jerry Brown (D) signed legislation that included a bill prohibiting local law enforcement agencies from detaining people for deportation if they are arrested for a minor crime and otherwise eligible to be released from custody. Other legislation allows undocumented immigrants to get driver’s licenses.

“While Washington waffles on immigration, California is forging ahead. I’m not waiting,” Brown said.

In Atlanta, DREAMers—young people with deferred deportation status—marched wearing blue graduation caps. They are suing the state of Georgia for the right to pay in-state tuition at public colleges. Meanwhile, many are taking free college-level classes from Freedom University, taught by volunteer professors, some from the University of Georgia.

Georgia state Sen. Vincent Fort said he was touched when a group of DREAMers came to visit the legislature a couple of years ago. “These young people have the spirit of the civil rights movement,” he said. Sen. Fort told his fellow legislators that he “will support these young people to the end. The fact is, these young people are America. Not just America, but the best of America.”

According to Fort, fellow legislators rejected the DREAMers in 2011 when they passed an Arizona-style restrictive immigration bill, HB 87. Georgia’s immigration law penalizes people who harbor or assist people in the country illegally and who present false identification when applying for a job.

The national mobilization is a prelude to a rally and free concert Tuesday on the National Mall in Washington. A few people at the Atlanta event said they planned to get arrested in Washington for civil disobedience.

DREAMers took civil disobedience lessons from Rev. Timothy MacDonald, who is president of the African American Ministers in Action of People for the American Way, and a longtime member of the Southern Christina Leadership Conference. MacDonald said he trained some DREAMers about three years ago. “They wanted to know how we did it,” he said, speaking of the American civil rights movement.

“Immigration is the civil rights issue of the 21st century,”’ said MacDonald.