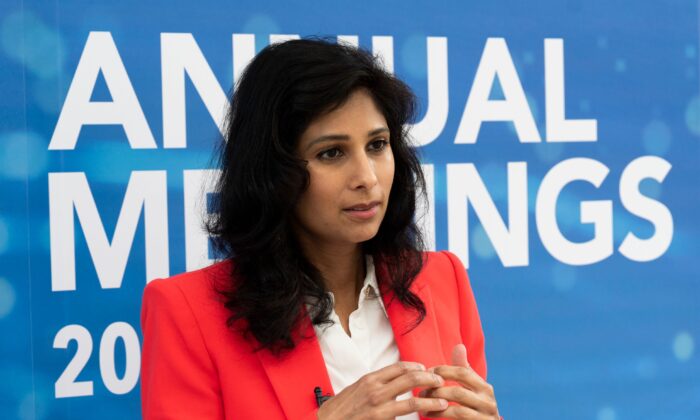 Gita Gopinath, the chief economist of the International Monetary Fund, speaks with AFP outside of their headquarters in Washington, D.C., on Oct. 13, 2020. (Andrew Caballero-Reynolds/AFP via Getty Images)
Russia-Ukraine War

The recent financial sanctions imposed on Russia for its invasion of Ukraine are threatening to weaken the dominance of the U.S. petrodollar as the world currency, said First Deputy Managing Director Gita Gopinath of the International Monetary Fund (IMF) to The Financial Times.

The sanctions may result in a more fragmented international monetary system, warned Gopinath.

She had previously said that the sanctions against Russia would not foreshadow the demise of the dollar as the world’s reserve currency and that the Ukraine crisis would slow growth, but not cause a global recession.

The United States, the EU, and the Group of Seven nations have hit Russia with a bundle of heavy sanctions and blocked the country from using SWIFT, the global communications service that clears international financial transactions, virtually cutting it off from the global financial markets and international trade.

The Russian government is retaliating by demanding payment in rubles or gold for purchases of energy and other important commodities.

“If they want to buy, let them pay either in hard currency, and this is gold for us, or pay as it is convenient for us, this is the national currency,” said the head of Russia’s energy committee, Pavel Zavalny.

The United States and the UK have imposed embargoes on Russian energy exports, but the EU, which is more reliant on energy imports, is more reluctant to ban it.

The new policy has hit the EU the hardest, sending gas prices on the continent up by 30 percent on March 30.

Meanwhile, the ruble has since risen to a three-week high past 95 against the dollar after the Moscow Stock Exchange reopened after the initial round of sanctions.

Zavalny has suggested that buyers from countries friendly to Russia, such as China, could pay in their own fiat currencies or in Bitcoin.

Russia had been planning for years to reduce its dependence on the petrodollar since the United States imposed sanctions in retaliation for its annexation of Crimea in 2014.

The current crisis in Ukraine has only accelerated those plans.

Before the recent conflict, Russia still had roughly a fifth of its foreign reserves in dollar-denominated assets, mainly held overseas in Germany, France, the UK, and Japan, which have since sided with the United States to isolate Moscow from the global financial system.

Gopinath said that Russia’s response to the sweeping sanctions could encourage the emergence of small currency blocs based on trade between separate groups of countries and would lead to further diversification of the reserve assets held by national central banks.

However, Gopinath doubts that the dominance of the U.S. dollar would likely be challenged in the medium term, as it is backed by strong and highly credible institutions and the fact that it is freely convertible.

“The dollar would remain the major global currency even in that landscape but fragmentation at a smaller level is certainly quite possible,” said Gopinath.

“We are already seeing that with some countries renegotiating the currency in which they get paid for trade.”

Gopinath did note that the dollar’s share of international reserves had fallen from 70 percent to 60 percent over the past 20 years, with the emergence of other trading currencies.

About a quarter of the decline in the dollar’s share is attributed to greater use of the Chinese yuan, but less than 3 percent of global central bank reserves are denominated in that currency, according to the IMF.

The IMF deputy director said that the conflict is spurring the adoption of an international digital finance system, utilizing cryptocurrencies and central bank digital currencies.

“All of these will get even greater attention following the recent episodes, which draws us to the question of international regulation,” said Gopinath. “There is a gap to be filled there.”

The CCP had been preparing for the use of the yuan as a global currency before the current crisis and was already ahead in adopting a central bank digital currency.

However, Gopinath said that the yuan was unlikely to replace the dollar as the dominant reserve currency.

“That would require having full convertibility of the currency, having open capital markets and the institutions that can back [them]. That is the slow-moving process that takes time, and the dollar’s dominance will stay for a while,” she said.