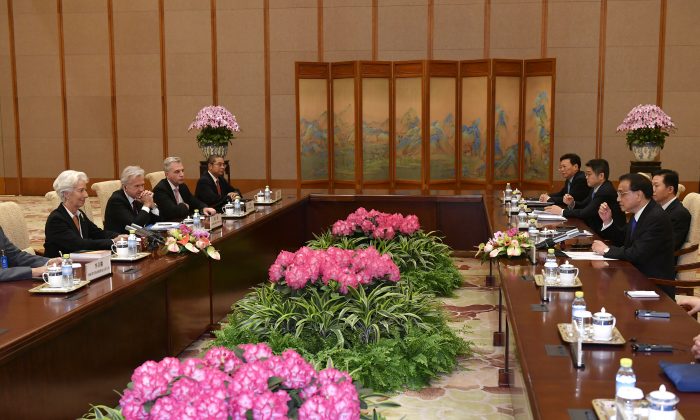 The International Monetary Fund reported that China is suffering its first series of annual current account deficits in 25 years because its savings rate is shrinking fast.

The IMF’s mission since its 1945 founding has been to ensure the stability of the global monetary system of exchange rates and payments for its 189 member nations and their citizens to transact with each other. With $1 trillion in lending capability through its sister organization the World Bank, the IMF supports loans to small nations to fight poverty and stands ready to serve as the “lender of last resort” during international financial crises.

The People’s Republic of China (PRC) did not join the IMF until 1980, when Taiwan was ejected from the United Nations after losing the support of U.S. President Jimmy Carter. The PRC has been a small bank borrower, but it benefited enormously from the IMF’s support for China’s admittance to the World Trade Organization (WTO) in 2001.

With China’s growth model and infrastructure building the envy of the world, former member of the Chinese Communist Party (CCP) Justin Lin Yiju was appointed chief economist of the World Bank in 2008. With the Great Financial Crisis devastating developed nations, China in April 2010 was able to increase its IMF ownership to the third largest share at 6.4 percent, behind only Japan’s 6.5 percent and the United States’ 17.5 percent.

Over the next decade through 2018, China continued its export boom by increasing capital spending by another +1.6 percent. Combined with its domestic savings rate falling by -7.1 percent to 45.2 percent, China financed its second boom by increasing the risk-taking leverage of its banks. Enodo Economics calculated that the second decade of the investment boom was unprofitable, because it took about $1.50 of China bank lending to generate $.79 of increased GDP over the next twelve months.

The IMF forecasts China’s domestic savings rate, which peaked in 2008 at more than double the world’s average of about 25 percent of GDP, will continue to decline because China is the fastest aging nation on Earth. China’s elderly are forecast to grow to 35 percent of the population by 2050, meaning China’s elderly will exceed the total combined populations of Germany, France, Japan and the United Kingdom combined.

Chinese children are culturally expected to provide for older parents. But 50 years of the CCP’s one-child policy means that the average Chinese married couple must shoulder the burden of paying for four retired adults. The IMF predicts that as China’s personal savings rate continues to decline, the Chinese regime must spend substantially more on social safety net to limit income inequality.

The IMF analysis highlights that China can no longer grow exports to bring in more cash and avoid a negative balance of payments deficit. When China joined the WTO in 2001, its share of total world exports was around 4 percent; by 2017 its share of exports had more than tripled to 13 percent. China is now the largest goods exporter in the world, but its share of world exports actually declined in 2016 and 2017.

China’s effort to move up its workforce up the knowledge worker value chain is negatively impacting the balance of payments because of the need to import more integrated circuits and crude oil. The IMF found that between 2016 and 2018, China’s import costs for crude oil jumped by 80 percent and the import costs for integrated circuits jumped by 60 percent. The combined cost of the two items rose from $380 billion to about $560 billion in just two years.

In conclusion, the IMF forecasts China’s falling savings rate will cause its current account to soon move into a deficit that will continue to expand at least through 2022.