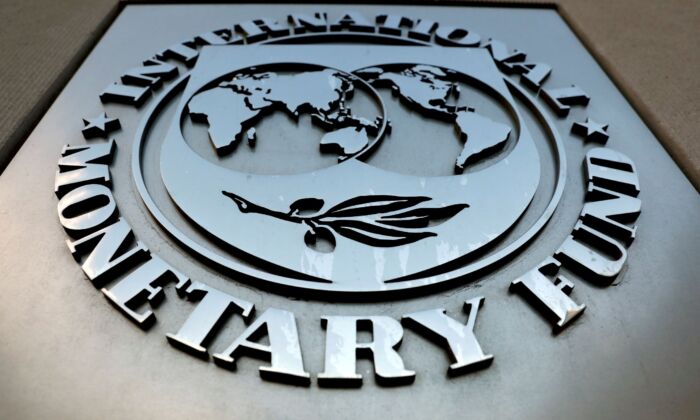 The International Monetary Fund (IMF) logo is seen outside the headquarters building in Washington, on Sept. 4, 2018. (Yuri Gripas/Reuters)
Inflation

WASHINGTON—Inflation could “become more sticky” in some parts of the world if supply chain disruptions continue or inflation expectations become de-anchored, the International Monetary Fund said on Thursday.

In the United States, the world’s largest economy, inflation is expected to move down in 2022, but policymakers should remain vigilant given upside risks, IMF spokesman Gerry Rice told a regular briefing.

“Continued high levels of U.S. inflation may necessitate a more front-loaded policy response, which would pose a systemic downside for both the United States and the global economy,” he said.

He said central banks need to “stay vigilant” on inflationary pressures and the IMF is working through scenarios on monetary and fiscal policy, including the spillover effects on emerging economies from monetary tightening in advanced economies.

Rice noted that natural gas prices had increased to record levels in some places around the world, but the IMF expected that energy prices would revert to more normal levels over the course of next year when heating demand ebbs and supplies adjust.

He had no immediate comment on the Biden administration’s request that some of the world’s largest oil-consuming nations, including China and Japan, consider releasing some of their crude reserves in a coordinated effort to lower prices and stimulate the economic recovery.