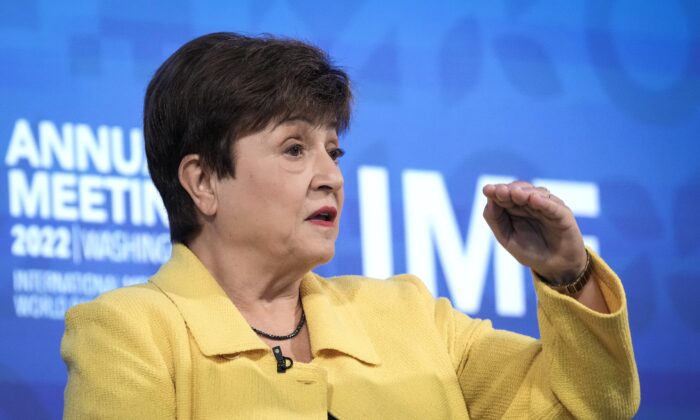 The head of the International Monetary Fund (IMF), Kristalina Georgieva, has cautioned against the Federal Reserve slowing down with its interest rate hikes as it attempts to tame soaring inflation.

Speaking in an interview with The Associated Press on Tuesday, the IMF Managing Director was asked for her thoughts on pausing interest amid concerns that a strengthening U.S. dollar is weakening other currencies around the world, particularly those in poorer nations, and contributing to a cost of living crisis in those countries.

Georgieva said that the Central Bank “has no option but to stay the course” until the cost of living significantly declines.

The dollar is up 18 percent this year and hit a new fresh two-decade high in September after the Federal Reserve raised interest rates by another 75 basis points.

In October, the U.N. Development Programme (UNDP) warned that developing economies are on the verge of a significant crisis due to the financial and monetary policies of developed nations like the United States.

“Rich countries have the resources to end the debt crisis, which has deteriorated rapidly in part as a consequence of their own domestic policies,” UNDP said.

“Market conditions are shifting rapidly as a synchronized fiscal and monetary contraction and low growth are fuelling volatility around the globe: 19 developing economies are now paying more than 10 percentage points over US Treasury bonds to borrow money on capital markets, effectively shutting them out of the market. Holders of many developing economy bonds are seeing them trade at deep discounts of between 40 to 60 cents on the dollar,” the UNDP said.

“The international community should not wait until interest rates drop or a global recession kicks in to take action: The time to avert a prolonged development crisis is now.”

Also in October, the United Nations, in its Trade and Development (UNCTAD) report, warned of a looming global recession driven by the monetary and fiscal policies of advanced economies, including that of the Federal Reserve.

UNCTAD warned that developing countries would edge closer to debt default unless central banks in advanced economies revert their course of action.

Despite concerns regarding the impact of domestic monetary policy on developing nations, the U.S. central bank has dismissed the possibility of easing its tight monetary policy, as inflation came in at 7.7 percent in October, way ahead of the Fed’s 2 percent goal.

Jim Bullard, president of the Federal Reserve Bank of St. Louis, in an interview with MarketWatch on Nov. 28., said he believes the FOMC [Federal Open Market Committee] will likely need to be more aggressive with their rate hikes going forward, raising them to at least 5 percent in an effort to cool down red-hot inflation.

Georgieva on Tuesday noted that inflation remains high in the United States and Europe, adding that “the data at this point says: too early to step back.”