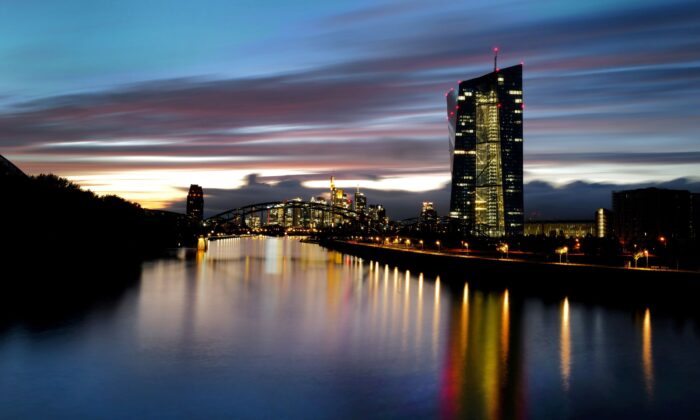 The skyline with the banking district and the headquarters of the European Central Bank (ECB) are photographed in Frankfurt, Germany, on Oct. 4, 2021. (Kai Pfaffenbach/Reuters)
Economic Policies

FRANKFURT—The European Central Bank has been right to maintain its easy money policy as inflation is set to fall after “transient boosts” from supply snags that may extend into next year, the International Monetary Fund said on Thursday.

Backing from her former employer was likely to bring some relief to ECB President Christine Lagarde as she struggles to persuade investors that she is not about to jack up interest rates in the face of record inflation.

The Washington-based institution said past data suggested that wages in the eurozone would rise only modestly and that inflation, which hit 5.1 percent last month, would fall back below the ECB’s 2 percent target.

“We expect inflation to fall slightly below the European Central Bank’s target once the pandemic fades,” read a blog post signed by managing director Kristalina Georgieva and two other officials.

“The ECB has appropriately decided to maintain an accommodative monetary stance until its medium-term inflation target is met while preserving its flexibility to adjust course if high underlying inflation proves more durable than expected.”

Lagarde, Georgieva’s predecessor at the helm of the IMF, repeated on Monday that any change to the ECB’s ultra-easy policy of massive bond purchases and negative interest rates would be gradual.

But she failed to convince investors, who are still pricing in rate hikes worth 50 basis points by the end of the year.

The IMF’s post was based on a new paper estimating that eurozone GDP would have been 2 percent higher last year had it not been for supply constraints, caused by lockdowns and by shortages of everything from containers to skilled workers.

It warned that bottlenecks may last longer than expected and possibly into 2023 due to the spread of the Omicron variant of the coronavirus, posing a challenge for central bankers trying to support the economy while keeping a lid on inflation.

“Keeping medium-term inflation expectations stable despite transient boosts to inflation, including from supply disruptions and surging energy prices, is key to managing this trade-off,” the IMF said.