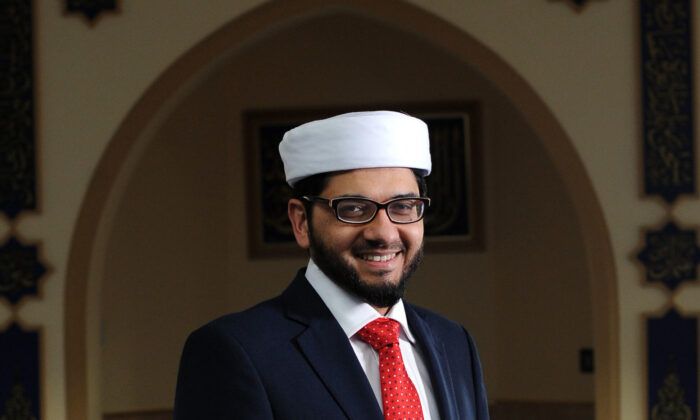 Imam Qari Asim was appointed to provide expert advice on a definition of Islamophobia to the government on July 23, 2019. (Ministry of Housing, Communities & Local Government)
UK

Senior Imam Qari Asim caught up in free speech row as he said “The Lady of Heaven” could “potentially fuel hatred” and that he had been working with “brothers and Imams” across the country to protest the film and cancel its showings.

Asim is an independent adviser to the British government on Islamophobia and a senior Imam who has urged Muslims to protest the film that is accused of “blasphemy.”

Asim wrote on Facebook on June 6 that “The Lady of Heaven Movie [is] Condemned,” and that it was a “disparaging” movie that has caused much “pain and hurt to Muslims.”

The $15 million film was written by the Muslim Sheikh Yasser al-Habib that depicts a tale of the “heart-wrenching journey of Lady Fatima, the daughter of Prophet Muhammad,” according to the film’s website. “Separated by 1400 years, an Iraqi child, in the midst of a war-torn country, learns the importance and power of patience.”

Al-Habib is a UK-based Shia cleric and the depiction of some of the characters has angered some Sunni Muslims—Sunnis make up the vast majority of Muslims worldwide.

Protests of Muslim men have taken place outside of cinemas Bradford, Bolton, Birmingham, and Sheffield since Saturday.

Despite Cineworld, which owns Vue Cinemas, telling The Epoch Times on Tuesday that it had dropped the screenings of ‘The Lady of Heaven’ nationwide to “ensure the safety of our staff and customers,” protests are still ongoing.

Vue, a cinema chain which is owned by Cineworld, is continuing to show the film at some sites.

The Daily Mail reported on Thursday that Muslim protesters entered Westfield shopping centre in Stratford, east London, on Wednesday evening, demanding that the film be taken down.

Asim, a senior Imam at Makkah Mosque in Leeds, wrote that he has “been working with many brothers and Imams across the country to liaise with the cinemas.”

“As a community, in some places we have been successful and those cinemas will no longer be showing the movie, in other places negotiations are still ongoing,” he said.

“Different approaches, rooted in our universal values, are necessary, as always. All agree that the movie is derogatory, and uses sectarian and racist narratives,” added Asim. “Freedom of speech is important and all citizens should be able to exercise their freedoms within the law. This movie could potentially fuel hatred, sectarianism, and extremism, which none wants to see in our country, and we must all avoid that.”

Asim was appointed independent adviser in 2019 to provide expert advice on a definition of Islamophobia to the government.

The appointment “underlines the Government’s commitment to stamping out all forms of religious and racial hatred,” the Ministry of Housing, Communities & Local Government wrote at the time.

He is also Deputy Chair of the cross-government Anti-Muslim Hatred Working Group, made up of representatives from Muslim communities, independent experts, and academics.

According to the Leeds Beckett University site, Asim, a senior lawyer at the global law firm DLA Piper, also has key roles in diversity and inclusion groups, charities, and organisations in Britain.

He is also on the regional leadership board of Mosaic, the latter of which was founded by the Prince of Wales.

On Thursday, Dame Sara Khan, who Prime Minister Boris Johnson appointed as the government’s independent adviser for social cohesion and resilience as part of a government action to tackle extremism in the community wrote an article in The Telegraph.

She said that “it is clear that religious sensibility can still provoke fear, paralysis, and too often an unwillingness to defend artistic liberty and wider freedom of expression.”

“It’s easy to criticise Cineworld for its limp response, but questions must be asked over what support it received from local and central government, MPs, and even the police. Despite claims that the protests were peaceful, video evidence appears to show a hate-speech mob made up of dozens of Muslim men chanting sectarian anti-Shia slurs through megaphones,” added Khan.