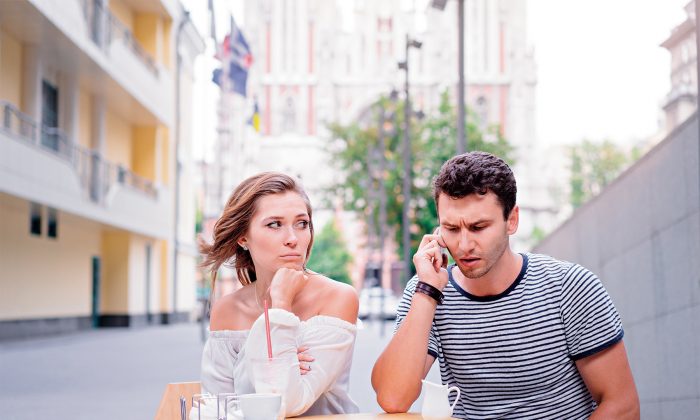 Checking one’s hand-held device in the company of another is a field that is rife with self-serving justifications: The general consensus is it’s a terrible thing to do—unless you’re the one doing it. (Shutterstock)
Values and Tradition

I’m Not Ignoring You, You’re Ignoring Me 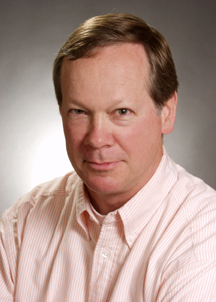 Con Chapman
Con Chapman is a Boston writer whose work has appeared in The Atlantic, The Christian Science Monitor, and The Boston Globe, among other publications. His biography of Johnny Hodges, Duke Ellington’s alto saxophonist, is forthcoming from Oxford University Press.
View profile
Follow
biggersmaller
Print

It’s Saturday night, date night at my house. Being the thoughtful, sensitive guy I am, I leave my phone at home. I want to give my wife my full-tilt undivided attention during this, our special time together.

We get in the car—she drives because she likes to, and I save my male ego for important matters, like remembering the batting averages of the St. Louis Cardinals’ “Million-Dollar Infield” of 1964.

We don’t have a reservation, so we begin to cruise by the common victuallers (New England-speak for “restaurant”) of our zip code until she finds one that, from the looks of the half-empty parking lot, may have a table for two available.

“Go in and see how long the wait is,” she says.

“You brought your phone, right?”

“Of course not—I want to spend the night catching up with you.”

“Then how are you going to tell me how long the wait is?”

“… and when you do, somebody else will get the table.”

And so it begins. Another night of what Gregory Bateson, a multi-talented English thinker, called a “double bind”: emotional stress experienced by someone who receives contradictory signals from another person. The victim is doomed to fail whichever option he—meaning me—chooses. Schizophrenia is often the result.

Eventually, we find a place to eat—otherwise, I would have starved and wouldn’t be writing this—but a palpable sense of disappointment hangs in the air, like the radon gas that is supposed to prefigure an imminent earthquake. I look around the room and, seeing a man checking his phone to see if his favorite team has done something really important, like win a wild-card game or waive a has-been athlete 25 years younger than me, I nod in his direction, hoping to earn some brownie points because I’m not a clod like him.

“Look at that guy over there,” I say. “Totally ignoring his wife.”

“Umm hmm,” she says over the top of her menu. “What are sweetbreads again?”

“The pancreas of a … you’re not listening to me!” I say, noticing that she’s looking down furtively the way our kids do when they hold their phones in their laps while refusing to eat stuffing at Thanksgiving.

“This is important, I’m trying to decide which rug to get for the living room.”

“So you’re ignoring me to check an email from”—I look around to make sure there are no Bedouins in the joint—“a rug merchant?”

“It’s not ignoring you when I do it,” she says in her defense. “This is for our home, the place where we live. Our biggest jointly held asset, remember?”

I do remember, now that she mentions it, but what it has to do with the etiquette of cellphone behavior isn’t clear to me.

Checking one’s hand-held device in the company of another is a field that is rife with self-serving justifications: The general consensus is it’s a terrible thing to do—unless you’re the one doing it.

Overlay this bed of crisp hypocrisy with a heaping scoop of solipsism—the apparently widespread belief that the existence of other people is a dubious proposition—and you get a world in which the golden rule is, shall we say, tarnished.

I’ve learned to live with this phenomenon because frankly, there’s not that much of interest to me on my phone. Had you said 40 years ago that someday mankind could hold the world’s knowledge in the palm of its collective hands, but would use it to watch cat videos and argue with strangers about politics, there would have been “Ban the Internet” demonstrations, the way people marched to Ban the Bomb.

But that’s neither here nor there, as they say, when it comes to man and wife. You want to keep things on an even keel on Saturday nights, and so you swallow your hard-earned logical thinking tools and wait for your better half to finish comparing prices of household furnishings. When she finishes, she looks up with a smile, and asks sweetly, “What were you saying?”

“I was talking about the St. Louis Cardinals, and the Million-Dollar Infield,” I say, a head-fake to see if she was listening, to which she replies:

“What has that got to do with rugs?”

Con Chapman
Follow
Con Chapman is a Boston writer whose work has appeared in The Atlantic, The Christian Science Monitor, and The Boston Globe, among other publications. His biography of Johnny Hodges, Duke Ellington’s alto saxophonist, is forthcoming from Oxford University Press.