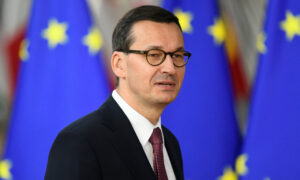 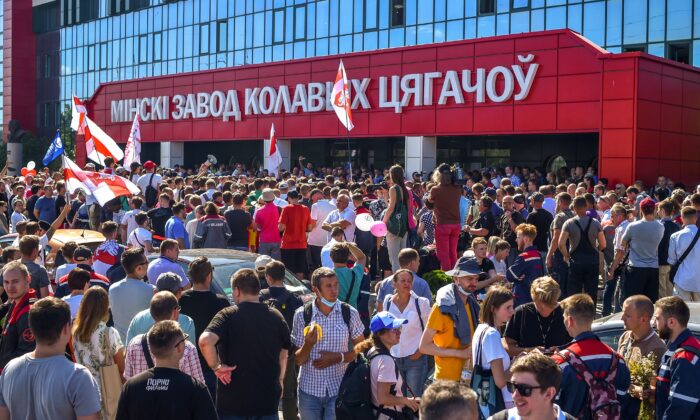 Belarus opposition supporters gather in front of the MZKT plant of the heavy off-road vehicles during a rally in Minsk, on Aug. 17, 2020, after incumbent president rejected calls to step down in a defiant speech. (Sergei Gapon/AFP via Getty Images)
Europe

‘I’m Not a Saint’: Lukashenko Offers to Hand Over Power After Referendum

MINSK—Alexander Lukashenko, the leader of Belarus, said on Aug. 17 he would be ready to hold new elections and hand over power after a constitutional referendum, an attempt to pacify mass protests and strikes that pose the biggest challenge yet to his rule.

He made the offer, which he insisted would not be delivered on while he was under pressure from protesters after exiled opposition politician Sviatlana Tsikhanouskaya said she was willing to lead the country.

In a sign of his growing vulnerability, Lukashenko faced heckling and chants of “step down” during a speech to workers at one of the large state-run factories that are the pride of his Soviet-style economic model and core support base.

He faces the threat of European Union sanctions after a bloody crackdown on protests following what demonstrators say was his rigged re-election victory last week. He denies losing, citing official results that gave him just over 80 percent of the vote.

The EU is also preparing to send a message to Russia not to meddle after Moscow told Lukashenko it was ready to provide military help in the event of an external threat.

Russia is watching closely, as Belarus hosts pipelines that carry Russian energy exports to the West and is viewed by Moscow as a buffer zone against NATO. Lukashenko and Russian President Vladimir Putin spoke twice over the weekend.

“We’ve held elections,” he said. “Until you’ve killed me, there won’t be any new elections.”

But he offered to change the constitution, an apparent concession that seems unlikely to satisfy protesters who say it’s something he has spoken about before.

“We’ll put the changes to a referendum, and I’ll hand over my constitutional powers. But not under pressure or because of the street,” Lukashenko said, in remarks quoted by the official Belta news agency.

“Yes, I’m not a saint. You know my harsh side. I’m not eternal. But if you drag down the first president you’ll drag down neighboring countries and all the rest.”

He also said people could hold parliamentary and presidential elections after the referendum if that was what they wanted.

“I am ready to take responsibility and act as a national leader during this period,” Tsikhanouskaya said.

Her video was released as hundreds of employees from the state broadcaster BT went on strike, and several presenters and staff publicly resigned in solidarity with the protesters.

The strike came as protests spread to those normally seen as loyal to the 65-year-old president. Some police, a sitting ambassador, prominent athletes, and a former prime minister have also voiced solidarity with the protesters.

The state broadcaster showed re-runs on the morning of Aug. 17 before issuing a fresh news bulletin. Videos on social media suggested BT had at one point aired footage of an empty studio with white sofas, and music playing.

Reuters couldn’t independently confirm that and the broadcaster couldn’t immediately be reached for comment.

Factory workers waving flags and posters joined protesters to rally outside the building, which was being guarded by security forces.

“We want to work honestly, we do not want to be forced to lie,” TV host Oleg Titkov told Reuters.

Thousands of protesters had earlier marched to a factory where Lukashenko flew by helicopter to speak to striking workers. He got a rough reception.

“Thanks, I’ve said everything. You can (continue to) shout ‘step down,'” he said, struggling to be heard.

He then walked away as the crowd chanted “Step down.”

Media outlet Tut.By showed footage of Lukashenko confronting one worker, saying “I will not beat you up” before adding, “If somebody provokes something here, we will sort it out in a hard way. So, man up.”

European Union leaders will send a message of solidarity to Belarusian protesters during an emergency video conference on Aug. 19, while Britain condemned the violence used “to suppress the peaceful protests that followed this fraudulent presidential election.”