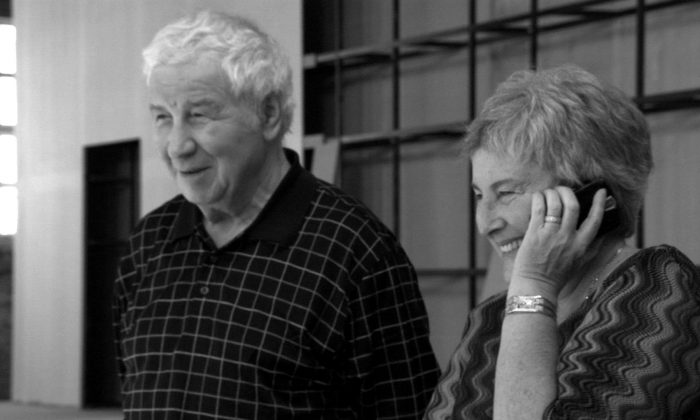 Ilya Kabakov does not really care how many millions of people Stalin murdered—more relevant to him is the way the Soviet state treated his mother like dirt.

His intensely personal experiences under communism profoundly shaped his conceptual work, created in collaboration with his wife, Emilia. After 20 years in the West, Kabakov finally returns to Moscow for an ambitious series of installations. Amei Wallach documents their mostly triumphant homecoming in “Ilya and Emilia Kabakov: Enter Here,” which opened Wednesday Nov. 13 in New York at Film Forum.

Kabakov’s contemporaries all acknowledge that the Moscow Conceptualists started with him. Like most of his colleagues, Kabakov paid the bills by illustrating children’s books. It allowed him plenty of free time to pursue his own work, in secret of course.

Arguably, the young Kabakov was rather fortunate when the Leningrad Art School accepted him, at a time when both pupil and institution had been evacuated to Samarkand. However, his formative art school years remain a source of pain and anger for Kabakov.

Years later, Kabakov’s mother agreed to his request for a written account of her difficult life. The narration of her words form the film’s strongest sequences, chronicling her hand-to-mouth years working as the night watchman at his art school, living illegally in a converted water-closet, because she lacked the proper residency papers. Constantly evicted by bureaucrats and snitches, Kabakov’s mother was essentially homeless and shunned in the workers’ paradise. Her missive-memoir became the framework for “Labyrinth (My Mother’s Album),” and its influence on other pieces is unmistakable.

While Ilya Kabakov clearly emerges as the senior partner, Emilia Kabakov seems perfectly content to serve as the more practical liaison with the business side of the art world. Twelve years his senior, Emilia Kabakov carries far less personal baggage from the Soviet years. However, it is rather eye-opening for her coming across an old informer’s journal with her family somewhat ominously identified as “the Jews.”

The Kabakovs’ brand of conceptual art is far more accessible than what might come to mind after watching the “Herb & Dorothy” documentaries. Unlike some of their colleagues, the Kabakovs’ work is clearly both intellectually and emotionally engaging, with their ironic use of Soviet symbols, and the trappings of crummy everyday Russian life speak volumes. Kabakov frequently incorporates his paintings into their so-called “total installations,” which further heightens their visual impact.

With an eye for telling details, Wallach and her crew nicely capture a sense of the viewing experience of the Kabakovs’ installations. Likewise, she also catches the artists, particularly Ilya, in reflective moods.

Executed with sensitivity, insight, and a dash of style, “Ilya and Emilia Kabakov: Enter Here” is recommended for those who appreciate fine art and Russian history.