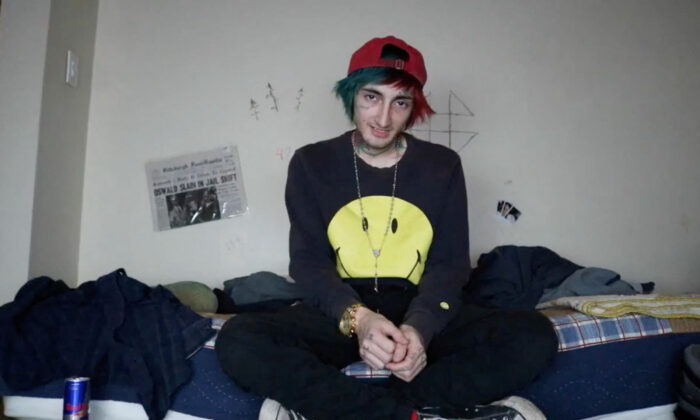 Robert Crimo III, the suspect in the mass shooting that took place at a Fourth of July parade route in the wealthy Chicago suburb of Highland Park, Ill., in a still image obtained from a social media video. (Robert Crimo/via Reuters)
Crime and Incidents

The man who opened fire on a parade in Illinois on July 4 left the gun he used near the scene of the crime, according to prosecutors.

Robert Crimo III, 21, was captured on surveillance video walking in an alley toward the back of a store in Highland Park just before the shooting, prosecutors said in a court document. A witness spotted a person on top of the building with a gun and saw muzzle flashes soon after as the person began shooting.

Immediately after the shots were fired, the surveillance footage showed Crimo running west in the same alley while carrying a black bag over his shoulder. As he ran, an object wrapped in red cloth fell out of the bag, Lake County Major Crimes Task Force spokesman Chris Covelli told reporters after Crimo was arraigned on July 6. The object was the rifle, determined to be a Smith and Wesson M&P semi-automatic rifle, used in the shooting.

Crimo left the gun behind and “kept running,” according to the document.

Asked if the suspect dropped the gun intentionally or accidentally, Covelli demurred.

“I don’t want to speculate on why. There could be a lot of reasons,” he said.

The Lake County Public Defender’s Office, which is representing Crimo, declined to comment.

It did not oppose Crimo being held without bail as the case proceeds.

During the shooting, which took place at approximately 10:14 a.m.—14 minutes after the parade started—dozens of rounds were fired, prosecutor Eric Rinehart said.

“He fired, emptied one clip, of I believe 30 rounds and reloaded a second clip, I believe, emptied that clip—I’m not positive—and actually reloaded a third time,” he said.

Dressed as a woman, Crimo evaded capture, made his way to his mother’s home, and soon drove off with her vehicle, authorities say.

He traveled to Madison, Wisconsin, with a different firearm and considered attacking a July 4 celebration there but ultimately opted not to and drove back to Illinois where he was arrested.

Prosecutors say Crimo, who had also purchased three other guns in recent years, confessed to carrying out the Highland Park massacre.

Five people were pronounced dead at the scene, and two others have perished from their wounds. Additional people were injured.

Crimo has been charged with seven counts of first-degree murder and will face more charges in the future, according to Rinehart. FBI Director Christopher Wray, commenting during an event in London, said that federal charges are possible.