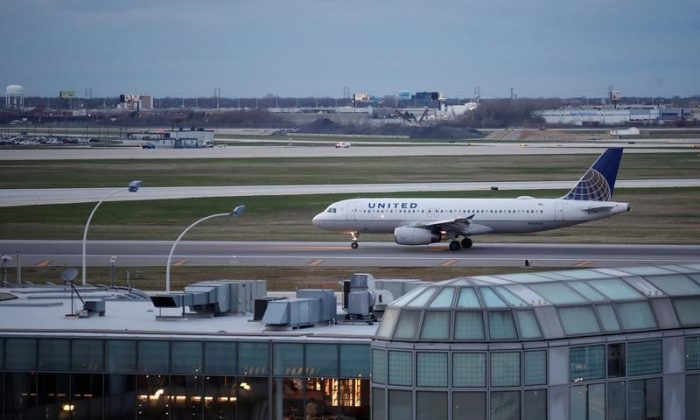 A United Airline Airbus A320 aircraft lands at O'Hare International Airport in Chicago, Ill., on April 11, 2017. (REUTERS/Kamil Krzaczynski)
US

CHICAGO—It would be illegal for Illinois state or local government employees to forcibly remove travelers from flights under a bill introduced by a lawmaker on Monday after a United Airlines passenger was violently dragged from an aircraft last week.

The treatment of Dao sparked international outrage, as well as multiple apologies from the carrier, and raised questions about overbooking policies of airlines.

Under Breen’s measure, passengers could not be removed from flights by state or local government authorities unless they were presenting a danger to themselves or others, a public emergency was taking place or the passenger had caused a serious disturbance, according to a copy of the bill introduced in the state capital Springfield.

“A commercial airline that removes validly seated customers without serious cause breaches the sacred trust between passengers and their airlines,” the bill said.

The legislation would also bar the state of Illinois from making travel arrangements, doing business with or having investments in any commercial airline that maintained a policy of removing paying passengers to make room for employees traveling on non-revenue tickets.

Dao, who was traveling to Louisville, Kentucky, from Chicago on April 9, suffered a broken nose, a concussion and lost two teeth when he was pulled from his seat by officers from the Chicago Department of Aviation’s security force to make room for four employees on the overbooked flight.

The three officers, who have not been named, were put on paid leave last week, the department said.

United on Friday said it was changing its policy on booking its flight crews onto its own planes following the incident. The company did not immediately respond to a request for comment on the Illinois bill.

Lawyers for Dao have moved quickly to preserve evidence from the flight, filing a motion to keep surveillance videos, cockpit voice recordings, passenger and crew lists, and other materials related to United Flight 3411 in preparation for a possible lawsuit.

The city and United agreed to preserve the evidence, Dao’s attorney, Thomas Demetrio said on Saturday.