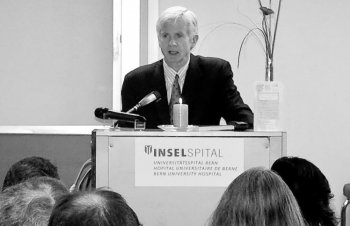 HUMAN RIGHTS WARRIORS: David Kilgour accepts the 2009 Human Rights Prize from the Swiss branch of the International Society for Human Rights on Jan. 16, in Bern. Kilgour's colleague, lawyer David Matas (not pictured), also received the award for the pai (The Epoch Times )
International

BERN, Switzerland—Two Canadians battling state-sponsored organ harvesting in China have been honoured with the 2009 Human Rights Prize from the Swiss branch of the International Society for Human Rights.

David Matas, a Winnipeg-based human rights and refugee lawyer, and David Kilgour, a former MP and Secretary of State for Asia Pacific, received the award for their work to uncover and stop widespread organ harvesting from live, unwilling, prisoners of conscience in China, particularly from practitioners of the Falun Gong meditation practice.

“There is an all too prevalent sense that human rights violations [in China] are so massive and so far away that nothing can be done about them,” said Matas upon accepting the award in Switzerland over the weekend.

Matas and Kilgour were co-recipients of the prize for their unceasing work investigating and raising awareness of the gruesome practice.

Since 2006, the two Canadian lawyers have been travelling the world meeting with government officials, medical professionals, and human rights groups about the “dismaying” results of their investigative research.

Research following 52 lines of evidence led them to the conclusion that since 2000, the Chinese regime has been using healthy Falun Gong prisoners of conscience as living organ banks—with many recipients being foreigners buying organs in China.

“This testing cannot be motivated by concerns over the health of practitioners because they are also systematically tortured,” he said.

He said China does not have an organized system of organ donations, matching, or distribution, and there is a cultural aversion to organ donation. The massive spike in organ transplants conducted since 1999 coincides with the beginning of the persecution of Falun Gong, Kilgour said—a strong indicator of a direct correlation.

“We estimate that about 41,500 organs transplanted over the period of persecution up to 2005 came from Falun Gong practitioners,” he said.

Kilgour and Matas’ findings have been published in two reports, and a book titled “Bloody Harvest: The Killing of Falun Gong for their Organs.”

Dr. Franz Immer, director of Swisstransplant and a panelist who spoke at the awards ceremony at the University Hospital Bern, said raising awareness increases pressure on governments to help victims of organ trafficking.

“The consequences of it are devastating and are ethically inadmissible regarding the harm caused to people who are victims of such machinations. Among other things, I bear in mind what happened to members of Falun Gong in China who were exploited for organ retrieval,” he said.

David Kilgour was a Canadian Member of Parliament for 26 years during which he served a term as Asian-Pacific Secretary of State for Asia-Pacific. David Matas is an international human rights lawyer and was the recipient of the Order of Canada award in 2009.

The ISHR prize has been awarded annually since 1994 to honour people and actions that support and advocate for freedom and human security.

In his acceptance speech, David Matas outlined some results of his and David Kilgour’s investigation.