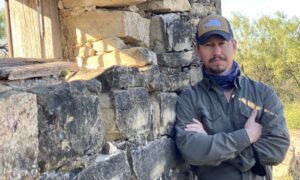 Three illegal immigrants have been sentenced to federal prison for manufacturing and distributing methamphetamine in a Norcross, Georgia, home where a child lived and less than 200 feet from an elementary school.

Roberto Arroyo-Garcia, 39, a Mexican national who has history of two deportations related to drug convictions, was sentenced Monday to 22 years in prison to be followed by 10 years of supervised release, the Department of Justice (DOJ) said in a press release.

Zury Brito-Arroyo, 28, and Bonifacio Brito-Maldonado, 24, who also both illegally entered the United Sates from Mexico, received 21 and 19 years in prison to be followed by 10 and five years of supervised release, respectively. The three, all cousins, pleaded guilty in October 2019.

According to the DOJ, immigration agents investigating meth distribution in 2017 were led to the Norcross house they believed was being utilized as a meth lab.

While agents were watching the house, Georgia State Patrol troopers stopped Brito-Arroyo as he was driving away from it with his 5-year-old child and wife. Troopers found $10,000 in cash wrapped in cellophane in the car, as well as a 9mm pistol.

Agents then searched the house and found Arroyo-Garcia and Brito-Maldonado “actively operating a methamphetamine laboratory” in a backyard shed. According to court fillings, chemical fumes coming from their operation were so strong that one of the men began vomiting.

Agents seized more than 23.6 pounds of finished crystal methamphetamine from the shed and inside the house, some of which was over 90 percent pure, additional methamphetamine in liquid form that had not been fully processed into solid form for distribution, another 9mm pistol, more than $8,500 in cash and “other methamphetamine trafficking paraphernalia, including respirators, rubber gloves and digital scales.”

Agents also found children’s clothes inside the house. They later confirmed that a 10-year-old child related to the men lived there.

Another residence used by Brito-Arroyo was also searched. The agents found another 9mm pistol, an electronic money counter, and four bundles of cash totaling $41,000, the release stated.

According to Katrina Berger, a special agent for the Department of Homeland Security, one of the “devastating consequences” of meth production is toxic vapors and deadly chemicals that threaten the health of children living nearby.

“These chemicals pose extreme danger to anyone in the vicinity,” Berger said in Monday’s statement. “The innocent children in the school next door and even the other family members in the household were placed in danger due to the defendants’ recklessness.”

While the DOJ release didn’t specify the name of the school, it was identified by the Atlanta Journal-Constitution as Rockbridge Elementary School, a Norcross public school with about 1,250 students in grades K-5.

“These men ran a lab churning out volatile and toxic chemicals to produce concentrated methamphetamine,” Acting U.S. Attorney Kurt R. Erskine said. “In doing so, they were exposing not only members of their own family, including children, an expectant mother, and a grandmother, to serious harm, but also innocent neighbors and school children who were completely unaware of the danger.”