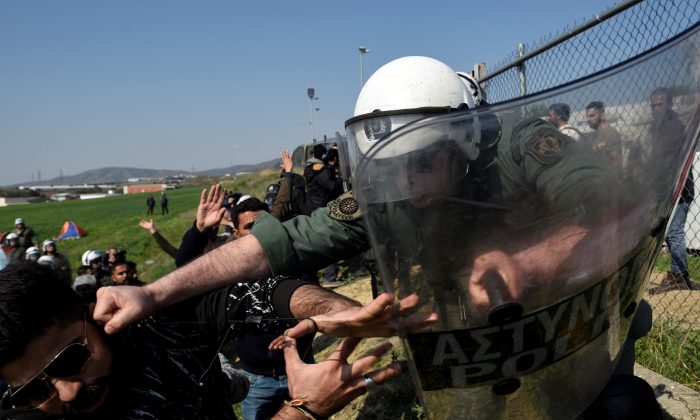 DIAVATA, Greece—Dozens of refugees and illegal immigrants stuck in Greece gathered in a field near the country’s northern border on Thursday, April 4, seeking to travel onward to northern Europe.

Small groups of people including children arrived at the field next to the migrant camp of Diavata near the border with North Macedonia, carrying their belongings on their backs.

Others pitched tents on the grass. Brief scuffles broke out with police as more people arrived.

The move was apparently spurred by reports on social media of plans for an organized movement to cross Greece’s northwest land border with Albania in early April, and then travel north.

“Tomorrow, today, all the people coming here, we will go to the border. Any border. We need to open the borders,” said Dario, an Iraqi Kurd.

Life in Greece was “not good, difficult,” he said.

The United Nations’ refugee agency (UNHCR) issued a warning against what it described as false information and rumours.

“Please be aware that these informal movements, whether by land or by sea, are risky and dangerous,” it said.

“Attempts to cross borders irregularly are often unsuccessful, and can bear serious consequences including arrest, detention, family separation and even death.”

Tens of thousands of refugees and illegal immigrants, mainly from Syria, Iraq and Afghanistan, became stranded in Greece when Balkan countries shut their borders in 2016. That route was the main passage way to northern Europe.

A makeshift camp sprung up in another field in 2016, near the village of Idomeni and mushroomed into a small community of at least 10,000 people camped in overcrowded, unsanitary conditions. Greek authorities eventually cleared it out.