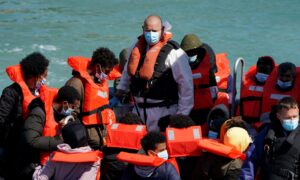 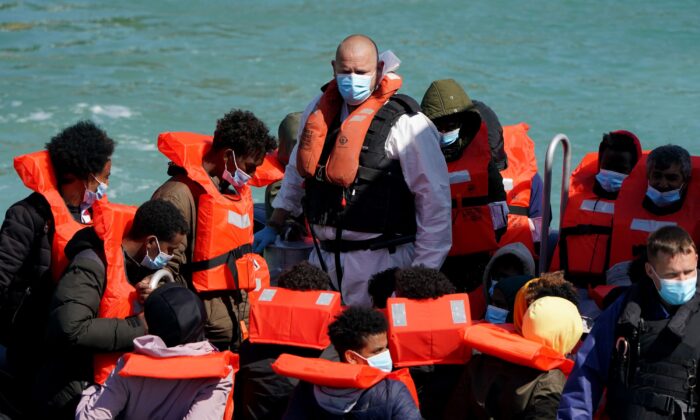 People thought to be illegal immigrants are brought into Dover, Kent, following a small boat incident in the Channel on July 1, 2021. (Gareth Fuller/PA)
UK

A Belgian helicopter and French fishing boats have rescued illegal immigrants attempting to cross the English Channel after their boat began to sink about 15 miles off the coast.

One survivor was airlifted, unconscious, to hospital.

A rescue operation was launched by French authorities on the morning of Aug. 12, after passing vessels reported that a boat with around 40 passengers was in difficulty off the coast of Dunkirk, with some overboard.

The local coastguard reported that a rescue helicopter arrived to find the boat starting to sink. Several people were rescued from the water by helicopter, others by fishing boats.

A lifeboat dispatched from the passing cargo ship which had raised the alarm picked up one unconscious survivor, who was then airlifted to hospital in Calais.

He is believed to have suffered cardio-respiratory arrest and was evacuated aboard a Belgian Air Force helicopter, French authorities said.

According to the latest update from the coastguard, the operation is still ongoing.

Others are thought to have succeeded in reaching the shores of the UK, with reports of a beach landing in Kent.

In the last two years, several people have died attempting to cross, as it soared in popularity as a way for illegal immigrants and traffickers to bypass border controls.

Already this year, according to PA data, over 10,700 people have made it across, on what are typically small inflatable boats.

Those figures indicate that the crossings account for a significant proportion of illegal immigration.

According to the Home Office, last year, when migration dropped due to pandemic restrictions, “known illegal entry” was around 16,000 people .

A report by the London School of Economics in 2007 (pdf) estimated the number of “irregular” migrants living in the UK was 533,000—a little under one percent of the population.

The English Channel is one of the busiest shipping lanes in the world.

Among those who have perished in its waters are Rasoul Iran-Nejad and his wife Shiva Mohammad Panahi, who died along with their three children when their boat capsized on Oct. 27 2020.

Their 15-month-old son Artin was reported missing following the tragedy and it was not until June this year that police confirmed a body found on the Norwegian coast was that of the young boy.